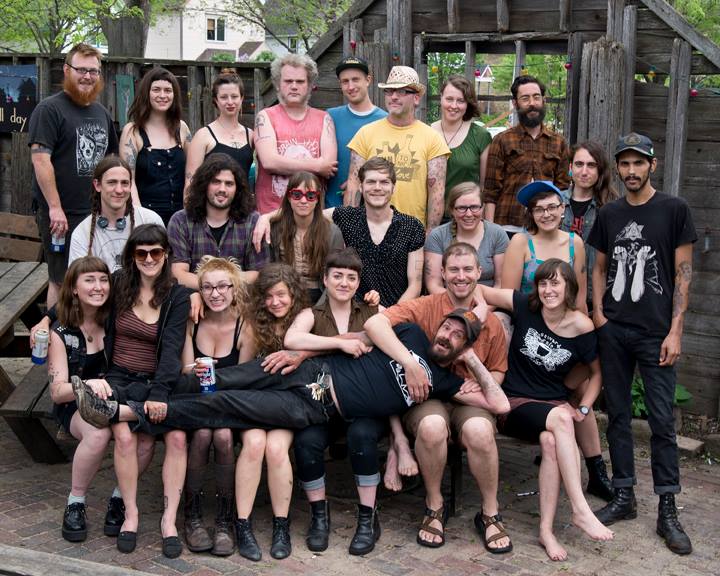 The Seward Café, which turns 40 years old some time this year, is a study in contradictions. Although it’s known for its longevity, laying claim to being both the oldest collectively-managed business in the Twin Cities and the oldest collectively-managed restaurant/-café in the U.S., its actual collectives seem to turn over completely about every seven years. Although the café has never been totally vegetarian (the principle is even enshrined in its charter), it has always remained a favorite among vegans and vegetarians. This is probably due to its great range of vegan baked goods and its adherence to an ethos of care with its veg customers by assuring careful separation in the kitchen and full disclosure of ingredients. And further, although it looks small and scruffy and like anything but a gourmet haven, some of its food items are nearly legendary in their greatness. And its amazing survival attests to its success with the public.

The current collective has an average age somewhere in the mid to late 20s, and an average time as collective member of just a few years. Benjamin Acaso, 32, who joined the collective in 2008, is one of the senior members. The hiring process is still the same as it’s been since the early 1980s: A prospective member is hired under what is called “intake,” and after a probationary period, they may choose to join the collective and become an owner-manager. Some choose to remain on as shift-workers, but most choose the path of workplace democracy. Benjamin admits it’s not easy going to long, frequent collective meetings and making decisions by consensus, but he and the other members believe strongly that they make better decisions because of it. “And I don’t ever want to have a boss,” he says.

The decisions are working, so he must be right. One decision that was struggled over for a long time was whether or not to accept credit cards. The anti-corporate, slightly Luddite gene is very dominant in the counterculture even now in the iPod generation. But in 2012, they finally decided to do it, and this was a transformative decision that immediately increased business and allowed new directions to open up. Some of these new directions were actually a return to the roots. In March 2013, the Café switched from closing at 3 p.m. to closing at 11 p.m., also adding (back) beer and wine sales and live music. The collective expected to lose money at first when they switched hours and added new, unfamiliar dinner items. But to their delight, they actually increased profits almost immediately. With no cover charge, musicians are paid 15% of bar sales plus tips, drink tickets and meals if they’re touring.

There are a lot of parallels between Benjamin’s take on the Seward Café and that of Barbara Jensen (or Barb as she was known at the time) one of the founding collective members. Barb said not all of the founders and early collective members were counter-culture, “some were musicians,” for instance. And Benjamin, in talking about the current collective’s desire to bring back live music, mentioned that many of the collective are also in bands of their own.

In 1974, Barb Jensen was one of four full-time employees at the Seward Co-op, then located where Welna II hardware store is now. The space where the café now sits was a 3-2 bar called the Fireside Inn which had recently closed. A group comprising Barb and two other co-op employees, Mike Bird and Lori Zuidema, and Howard Hickman, who was a co-op volunteer, schemed to buy the Fireside Inn and found the Seward Café, a worker-owned and run café that would continue to serve the neighborhood, but serve it better. They each contributed what money they could for the purchase, and in the first years, worked essentially as volunteers. Barb remembers those early collective meetings starting out with the question, OK, who needs what? Who needs rent, who’s having their electricity shut off, whose car just died? Like that. It was pure primitive communism, but the spirit was utopian anarchism.

And then, barely a year after the café opened, the Twin Cities was embroiled in the Co-op Wars. Along with the Seward Co-op across the street, the café in the years 1975 and 1976 was a haven for the resistance against the Co-operative Organization, or CO, which was seeking to “take over” co-ops across the Twin Cities, often violently. But ironically, and here those contradictions are again, even though the Seward Café was stalwartly anti-CO, they had already institutionalized some of the better ideas the CO was trying to push onto all co-ops dogmatically—they were open late, they kept prices low, they served hamburgers and Pabst Blue Ribbon.

One thing Barb says that came out of the Co-op Wars was an increasing “legalization” of the co-ops, both worker-owned and the new model for food co-ops, consumer-owned. This was a good thing in the end, and the legal, in-the-system framework—putting the land in a trust, having a charter and rules to govern the collective, using proper accounting procedures—all manage to contain the anarchist heart of the Seward Café and enable it to live on through all the changes, whether economic or ideological. Barb went on to help found DANCE Warehouse, to be a major participant in the All Co-ops Assembly (ACA—which no longer exists) and the Peoples Center on the West Bank (which still does.) She went back to school, got a masters degree, taught at Metro State, and is now a community and counseling psychologist. A working-class girl who became radicalized in her late teens, she is also the author of a book, “Reading Classes: On Culture and Classism in America” (Cornell Press, 2012).

Benjamin believes the Seward Café will survive at least another 40 years. So many people love the righteous pancakes, the CP Iced Coffee, the vegan cookies and muffins, the Earth Breakfast. And now they are coming in for local food like Tempeh Tantrum, LaPerla tortillas and craft beers. The Seward Café is successful enough to be a help to other collective businesses, such as Hard Times Café. And ultimately, as Benjamin says, “the community won’t let us die.” A 40th anniversary celebration is being planned for some time in the late fall.