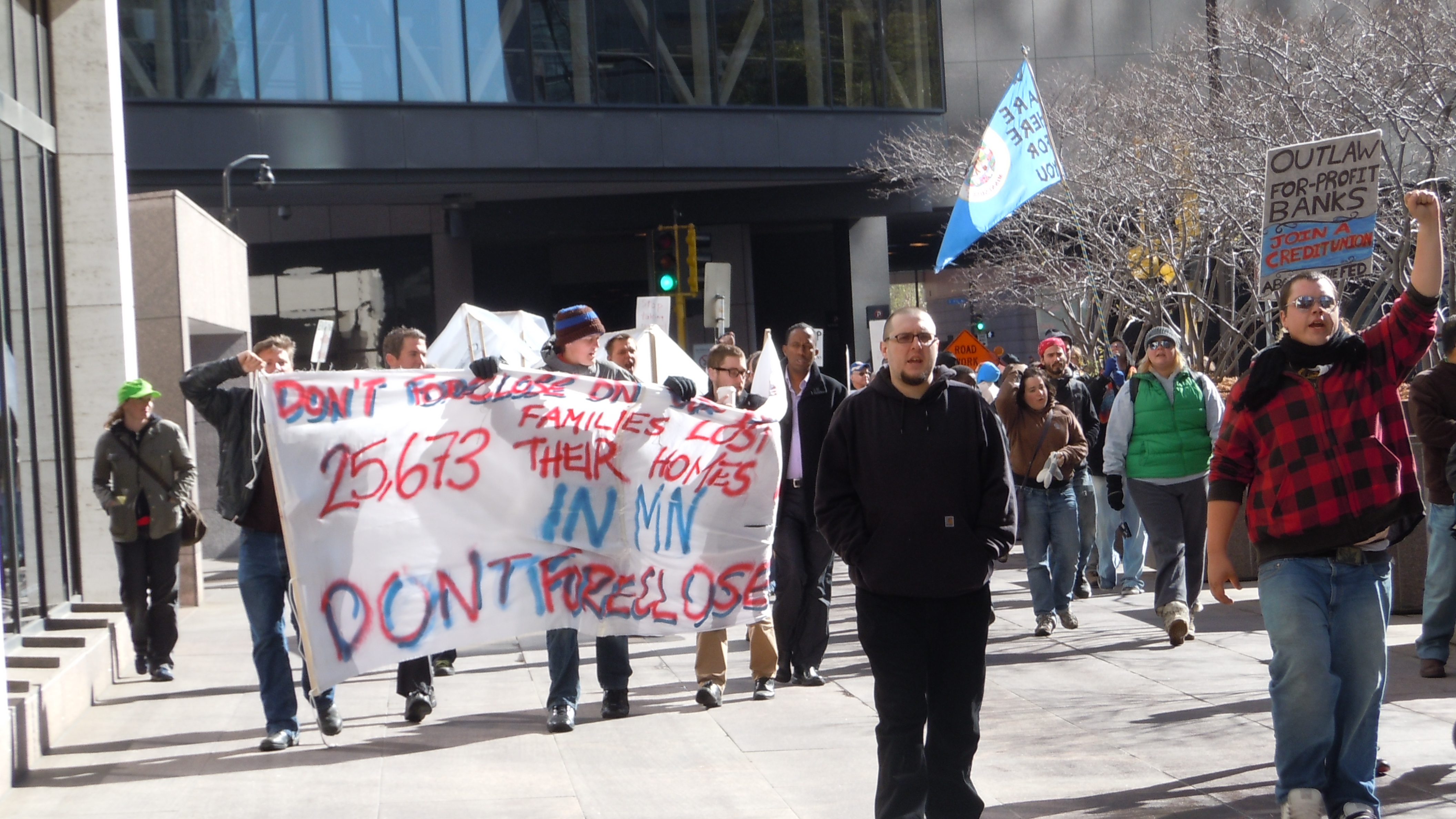 Police arrested seven OccupyMN protestors who occupied an intersection in downtown Minneapolis on October 20. The protestors were part of a larger demonstration to call for a moratorium on home foreclosures.

OccupyMN is a demonstration against inequality that has been occupying Hennepin County Government Plaza in downtown Minneapolis. It has seen one other arrest in the two weeks since it started.

Chanting “Take it to the banks!” and “Stop foreclosure now” a group of about 100 protestors crossed Third Avenue to U.S. Bank Plaza and erected four tents made of clear plastic and a wooden frame. After about half an hour, they moved around the building and into the intersection of Sixth Street and Second Avenue where they again set up the tents.

Police quickly pulled three tents away, but protestors set up another small tent. Speaking into a megaphone, one protestor said, “It’s very interesting that we haven’t been arrested. It shows that the police and city know the 99% are on our side.”

After the protestors had been in the intersection for an hour, a police officer announced that anyone who did not get out of the street would be arrested. Everyone complied except for seven who remained in the tents. The police gave two more warnings and then arrested those seven people without incident. They were all charged with misdemeanors.

The day’s events come after a week of rallies and agitation.

OccupyMN held a student rally at the Government Plaza on Wednesday, October 19. About 150 people were in the crowd. Local spoken word and hip hop artist Guante performed for about half an hour. One of his songs includede the lyrics:

What you need to know
the real evil yo
is all the politicians and CEOs
and you can catch every petty criminal like me
but can you put food on the table of a starving family?

Then, a student organizer named Stephanie Taylor spoke. “I’m facing a lifetime of debt…that I incurred from going to a four year public university,” she said, “Student debt should be erased and adequate education funding should be established.” She then led a chant of “Banks got bailed out! We got sold out!”

Continuing that chant, the crowd set off on march through downtown and stopped in front of the Wells Fargo building at Seventh Street and Marquette Avenue. Several speakers talked about youth unemployment and one called for a moratorium on home foreclosures. Macalester student Sarah Levy addressed the crowd and said, “We have been backed so far into a corner that our only option is to fight back!” The march continued down Seventh Street and Nicollet Mall.

On Nicollet, one taxicab driver honked his horn and gave a thumbs up. A police officer immediately approached the cab. The driver, who identified himself as Nidal Dami said that the cop asked him “Do you want to get a ticket for honking your horn?” The march then went up Marquette, past the TCF building, and finished at Government Plaza.

After the march, Macalester student Brett Srader said this was his first time at OccupyMN but that he came because, “We need something like this.” He added that though there was no measurable effect of the march, “Every time you have a march you bring more people and make [the movement] a little stronger.”

OccupyMN Goes to the County Board

Members of OccupyMN went to the Hennepin County Board of Commissioners meeting on Tuesday, October 18, to ask that the county allow them to erect tents in Government Plaza. The commissioners said they would not allow tents to be erected.

OccupyMN had put up tents in Government Plaza on Saturday, October 15, but sheriff’s deputies took them down early the next morning.

Speaking to the commissioners, many protestors said that they need shelter especially as the weather gets colder and said that shelter is a human right. One person from OccupyMN said she thinks it would be unhealthy for to stay at Government Plaza at night without a shelter, and she said “Staying there all night is a statement I can’t make.”

After the protestors spoke, the commissioners discussed allowing tents in Government Plaza. Commissioners Mark Stenglein, Mike Opat, Jeff Johnson, and Jan Callsion said they did not support allowing tents. Callison said she has sanitation and safety concerns with the occupation, and was concerned that OccupyMN is preventing other people from using Government Plaza. “that plaza should be available to everybody,” she said, “I cannot support tents down there.”

Commissioner Jeff Johnson said that he was also concerned with costs to the county that OccupyMN is causing. Later that same session, the commissioners voted to allocate $152,000 to the county sheriff’s office and the property services department to cover security costs related to OccupyMN.

Responding to criticisms of the cost of its occupation OccupyMN released a statement saying, “If we are really concerned with spending, let’s enact an immediate moratorium on foreclosures. The sheriff’s office spent nearly half a million dollars foreclosing on Minnesota family’s homes in 2009, and we can only expect costs to continue rising as the cost of the economic crisis continues to fall on the backs of the middle class and the poor.”