World-class symphonic music will return to Orchestra Hall February 7 when the musicians of the Minnesota Orchestra, locked-out of their jobs for 15-1/2 months, return to their home stage.

The Minnesota Orchestral Association locked out the musicians — members of Twin Cities Musicians Union Local 30-73 — October 1, 2012 when the musicians unanimously refused to accept a contract that included wage cuts of 30 percent and damaging work rule changes, a contract which the musicians said would compromise the orchestra’s world-class caliber.

Facing down an orchestra board led by the region’s economic elite, the musicians stood their ground and held out for a more favorable contract settlement.

January 14 the two sides announced a long-elusive compromise, an agreement the musicians say will meet their goal: to preserve a world-class symphony orchestra.

“Musicians are pleased that we have come to a solution with our board,” said Tim Zavadil, clarinetist and musician negotiator, “and we are ready to work with them to begin the hard work that lies ahead. We are anxious to start performing for our community at home in Orchestra Hall once again. We know that there is a great love for this Orchestra throughout the community, and we are confident that this community will, in fact, continue to support world-class music in the Twin Cities.”

During the lock-out, the musicians self-produced some two dozen sold-out concerts, bringing in renowned guest soloists and former musical directors to conduct.

“The connections that we made with our audience are something that we treasure and will do everything we can to maintain and grow,” said Wendy Williams, associate principal flute.

During the lock-out, Williams helped coordinate public relations for the locked-out musicians.

“You will still see me in the lobby after concerts,” she said. “Those feel like real friendships that were made.”

“We have to work real hard to bring that feeling and connection back to Orchestra Hall,” Williams said. 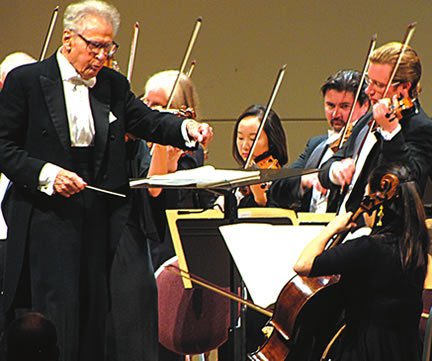 Right: Locked-out from their jobs in a contract dispute, the musicians of the Minnesota Orchestra organized their own concert October 18, selling out the auditorium at the Minneapolis Convention Center. The orchestra’s legendary former conductor, Stanislaw Skrowczewski (photo, left), now age 89, led the symphony in moving performances of works by Dvorak and Shostakovich.

With the lock-out extending more than a year, MOA board members unhappy with the continuing stalemate apparently got involved in negotiations to break the logjam.

Previously, former MOA board chair Richard Davis, the CEO of U.S. Bank, had been leading negotiations for management.

“There were new faces involved and that was extremely helpful,” said Brad Eggen, president of Twin Cities Musicians Union Local 30-73, who was involved in the negotiations.

Eggen wouldn’t comment on whether or not Davis played a role in reaching the final settlement.

But, Eggen told the Labor Review January 18, “there has never been an opportunity to achieve this settlement up until the last couple of weeks.”

The final three-year agreement is far from the proposal management originally demanded.

“I think it’s not only a good result but one I didn’t imagine happening a couple of weeks ago,” Eggen said.

The musicians will be getting a pay cut — 15 percent in the first year— but that’s one-half of the 30 percent cut management originally wanted. Musicians’ pay will increase two percent in the second year and three percent in the third year.

“Keeping our salaries in the top ten was a critical issue for us, as it allows us to attract and retain the finest musicians in the country, and continue building the tradition of excellence that has been cultivated by the community over the past 110 years,” said Marcia Peck, cellist and musician negotiator.

“The goal is high art — and the good news is that there are many on the orchestra board who recognize that,” said Eggen.

“I think the musicians won the battle in that regard,” Eggen said. “They entered into a contract which gives the opportunity for a high-quality organization.”

The agreement also provides that classical music will be the focus of the MOA, “with a guaranteed minimum of 20 weeks of classical performances each year,” according to a joint news release from the MOA board and the musicians.

“We’re grateful for the board leadership that worked so hard to reach the agreement,” Williams said. “We’re going to want to grow and build on that shared vision.”

Wells Fargo executive Jon Campbell, MOA president during the lock-out, will be stepping down.

“We’re looking forward to working with the new board chair as soon as he or she is elected,” Williams said.

The 15-1/2 month Minnesota Orchestra lock-out was “the most significant labor-management issue in orchestral music in the last several decades,” Eggen said. “No other top-tier orchestra has ever been out this long.”

And, he added, no other orchestra in a labor dispute ever created a structure to present their own concerts. “This will be a model for how a musicians union should operate in the future,” Eggen said.

“Those were very passionate concerts, some of the best I’ve heard,” Eggen said. “The orchestra maintained an exceptionally high standard.”

“Of course, there has been a toll, financially, emotionally,” Williams said.

Members struggled to survive for more than a year without a regular salary, leaving home for days, weeks or months at a time to accept guest positions with other orchestras or, in some cases, resigning from the Minnesota Orchestra for a permanent placement elsewhere.

“But the good that has come in the way we’ve worked together I hope will help us in the hard work of restoring the orchestra,” Williams said.

Working Partnerships — the community services arm of the Minneapolis Regional Labor Federation — accepted donations from labor organizations and from the public for a hardship fund for the musicians. The response was overwhelming, with donations coming from all across the country.

“Their hardship was significant but it was tolerable because of that level of support,” Eggen said.

“We are incredibly grateful for the support financial and otherwise from Working Partnerships and from the Twin Cities Musicians Union and the support of the community,” Williams said.

People wrote letters to the MOA board and to elected officials, they bought tickets for the musicians’ self-produced concerts, they came to rallies, and they offered financial contributions.

In addition, Williams said, “the way the musicians have come together and supported each other has been inspiring.”

“With this agreement in place, we look forward to working with new board leadership to rebuild our relationship and trust within our organization and with our audiences,” said Doug Wright, principal trombone and musician negotiator.

“We’re going to need hard work from both sides to rebuild the orchestra,” Williams emphasized. “The next few months will determine how quickly trust can be rebuilt.”

As the Labor Review went to press, the Minnesota Orchestral Association announced four “homecoming” concerts by the orchestra beginning February 7. For tickets and other information, visit www.minnesotaorchestra.org.