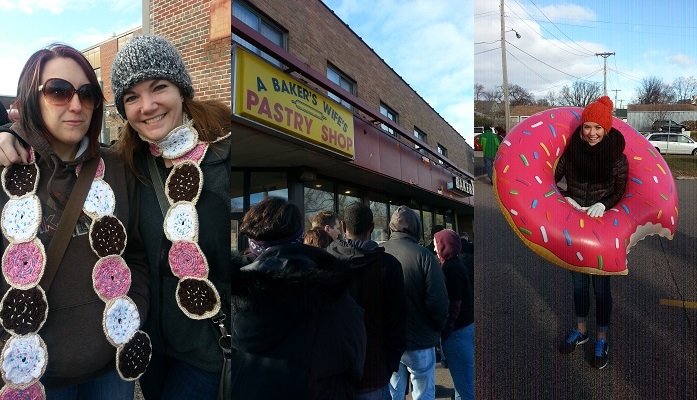 (Photos by Megan Nash) Participants showed up in large numbers for Twin Cities' first Donut Crawl, some of them donning donut attire.

Angie King just wanted to do something fun with her friends on the weekend. So, a few years ago she invited about ten people to go on a local donut crawl. After spreading the word via social media, King and some friends held their first official donut crawl.

The Twin Cities Donut Crawl happened last weekend with around 1,000 people in attendance and 3,300 donuts passed out. Despite the chilly weather, attendees and volunteers alike were in great spirits and enjoyed their sugary treats. People were able to sample donuts from A Baker’s Wife Pastry Shop, Mel-O-Glaze Bakery, and Bogart’s Doughnuts Co.

“The idea of a donut crawl has really resonated with people who are over pub-crawls,” said Donut Crawl co-founder Bill Svoboda. “A lot of people are excited about doing an activity that is fun. People appreciate that there’s something besides drinking. It’s life-giving kind of fun.”

King started the crawl with Svoboda, along with Randy Kowlessar and Jason Westplate. Kowlessar heads the marketing and branding. King is in charge of the event planning details. Westplate orchestrates details with the bakeries and Svoboda handles the business side of things.

When they launched, they had 90 people sign up right away, said Svoboda. But after the local media caught wind, the first day sold out within a few days, he said, so they added a second day, which sold out in about five days.

Five Watt Coffee served coffee at the event, and attendees were given a punch card that listed the three bakeries in the order in which people had to attend the bakeries. According to the Donut Crawl press release, the order on the punch cards varied so that the attendance at each bakery would be staggered.

Donut Crawl attendee Heather Anderson said that she was impressed with the organization of the event.

“I expected to wait in lines and that wasn’t the case. I thought the way that it was organized was really efficient. The furthest away I had to park was two blocks,” Anderson said.

Jackie Kousma was a volunteer who said that she really enjoyed the event.

“I thought that the event was great. I liked the variety of donuts,” Kousma said. “I like that each shop had its own unique flavor. It was a very well organized event and I can’t wait to do it again in April.”

Some of the proceeds from the event go to Second Harvest Heartland. According to their website, Second Harvest is the Upper Midwest’s largest hunger relief organization. The organization collected, warehoused, and distributed more than 76 million pounds of food to people in need in 2012.

“We chose Second Harvest, because we were looking for an organization that had some recognition and was doing cool things in the area,” Svoboda said. “They were just the organization that we wanted to be a part of.”

Erin Olson attended the event and said that she appreciated that some of the proceeds went to Second Harvest.

“I think that the event was a success. It was very well organized and a fun concept. It was fun being a part of something like that where the proceeds are going to a good cause,” Olson said.

For people who are disappointed about missing this event, there will be another donut crawl to look forward to on April 11, 2015. They date is set, but the details will be announced later on. The group plans to continue with one or two donut crawl events each year in the future. You can check out their website www.tcdonutcrawl.com to stay up on the latest news.