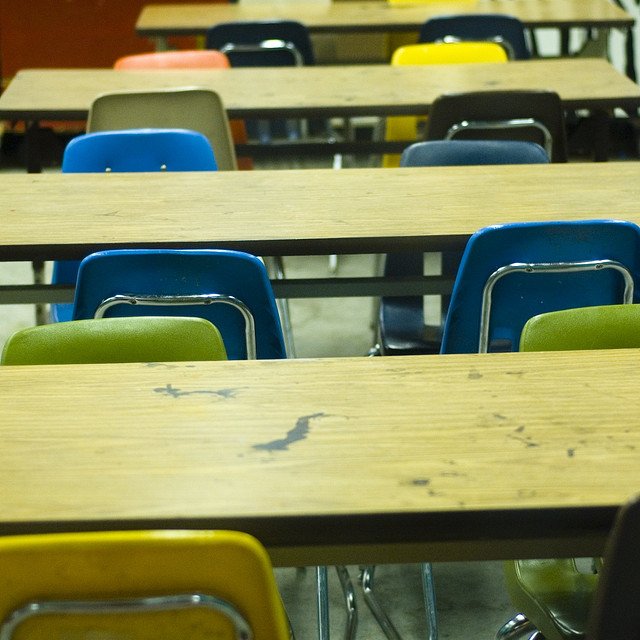 We all have a September 11th story. It’s the “where were you when” story of my generation. Without fail, we remember exactly where we were and what we were doing when we first heard the news. My September 11th story takes place on a clear, crisp day in Washington, DC. The sky was particularly brilliant that morning, a stunning shade of periwinkle blue. The cool air was invigorating and energizing, containing that uniquely September blend of possibility and promise. I walked into my classroom at H.D. Cooke Elementary, hung up my coat, and began preparing for my students’ arrival. As always, I began my day by composing the morning greeting onto the faded green chalkboard in my neatest teacher handwriting:

When I think back to that day, I always return to the innocence of that greeting. I remember with absolute clarity inscribing those words onto the chalkboard, wholly unaware of the significance they would obtain as the day wore on. That message became the background image to the unfolding events of the morning. The principal taking me aside and whispering the news to me. My attempts to stay calm and positive while my heart raced with fear. The steady parade of parents who rushed into my classroom, sweeping their children up in their arms, embracing them, kissing them, taking them home.

But there was one student who didn’t get picked up early that day. His name was Adrian. He was short for his age, plump, and wore glasses. He had inquisitive eyes and a restless, gentle soul. He was exceedingly quiet. Adrian’s family had only been in the U.S. for a couple of months. He knew very limited English and I knew just a bit of Spanish so, in the absence of substantive conversation, we searched for mundane tasks to occupy the hours that seemed to hover endlessly over us. We began doing chores around the room. We washed the chalkboard, watered the plants, dusted the windowsills, and swept the coat room. It was a relief to keep our hands busy. It passed the time. Periodically an administrator poked his head in with a hurried update on the unfolding events. The first tower had fallen. And the second. Then, much closer to home, the Pentagon.

I ached to be safely at home with my husband who was working downtown DC at the time of the attack. I checked my phone a hundred times for a message from him, but phone service was down. My mind raced and my pulse quickened as the day wore on without a word from my loved ones. I’m not sure how much Adrian absorbed that day. He was clearly nervous. He was certainly scared. We had no choice but to wait out the hours together until his father came for him. When we ran out of chores, we sat down at the child-sized table and chairs and ate our packed lunches together. We chatted a bit about our food. We chuckled at the fact that my carrots and his Cheetos were the same color. He offered to share his cookies with me.

Shortly after lunch, my husband burst into the classroom. He immediately dropped his coat and briefcase onto the floor and rushed to embrace me. In his arms, I exhaled for the first time since hearing the news. He filled me in on the scene in DC. Streets closed everywhere, the Metro halted, people gathering in the streets to exchange stories and to offer up assistance. The three of us waited in that classroom together for a few more hours until Adrian’s father finally came for him, right at dismissal time. He was confused and surprised to see that he alone had waited to pick up his son. He apologized for this misunderstanding. “I’m so sorry to make you wait,” he said. “I thought school was the safest place for Adrian to be today.”

I gave Adrian a hug and a high five and we parted ways. As my husband and I walked across the eerily silent schoolyard towards my car, I found myself overcome with a surge of emotion. I suddenly missed Adrian. Acutely. I felt hollow and empty and lonely. I also felt overwhelmingly grateful. I was safe. My loved ones were safe. Life, for us, would go on. Not everyone was so lucky.

It is often said that everything changed on September 11. And while it is certainly true that many things changed on that day, I found great comfort and solace in the many things that remained the same. Within days of the attack, school resumed and the schoolyard rang, just as before, with jump rope rhymes and the cacophony of kids at play. My desk remained just as cluttered with rainbow-filled drawings and love notes from my young, adoring students. There were morning meetings, bathroom breaks, and staff meetings. In the wake of September 11, these mundane events were elevated to something greater. They were not only appreciated, they were revered. I would even say that they were holy.

Katharine Kline is the Communications Manager for the Minnesota Jewish Theatre Company. MJTC’s spring production, Jericho by Jack Canfora, examines the emotional aftermath of September 11th and is a theatrical testament to survival and recovery.