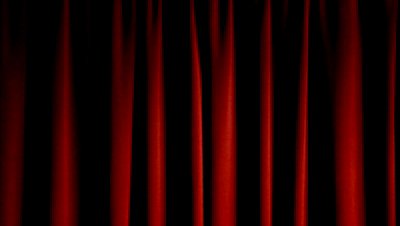 The Minnesota Senate Rural Rask Force is holding meetings at the state capitol in St. Paul that are listed on the senate’s calendar, being briefed by public officials and representative of powerful special interests about a legislative agenda, and receiving handouts about that testimony.

But no video or audio is being recorded, no minutes kept, and no digital copies of the handouts are available for the interested public to read.

Bluestem Prairie contacted both Saxhaug’s office (left a message) and spoke to Senate Communications office staffer Amelia Cerling last week with the hope of obtaining an audiotape or minutes of a task force meeting that took place on Wednesday, November 12.

This morning, we received a response from Cerling:

I have heard back from Sen. Saxhaug’s staff and unfortunately don’t have good news to share. Because the Rural Task Force is not an ‘official’ Senate task force there is no audio/video or minutes taken. Likewise there are no digital copies of the documents handed out at the meeting.

If you are interested in attending the next meeting, it’s taking place on Dec. 8 at 10 a.m. I apologize for not being more help.

Please let me know if there is anything else I can assist with.

A quick glance at the Senate calendar for December 8 shows that the meeting has yet to be added to the online calendar (screenshot below): 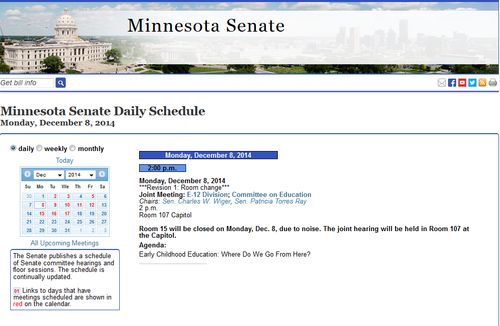 First off, Bluestem wants readers to be clear that Cerling has handled our request with great professional tact, and no one should blame the messenger here. She’s not the issue.

The problem is the inability of rural Minnesotans to learn what is said at meetings of a Senate Rural Task Force unless we attend these meetings ourselves. It’s about a three-hour drive from Bluestem’s world headquarters in Chippewa County’s sunny Maynard to the state capitol, and even longer for people who live in Hallock, Clinton, Luverne or LaCrescent.

And unlike the state senators, we’re not getting per diem or mileage. One would think that since the public is paying that, as well as for keeping the lights on and the building warm, record of the task force might be kept for us.

After all, the stated goals of these hearings, according to an August 22, 2014 press release, is:

The task force has meetings planned throughout the fall and into December and will identify key issues that impact rural areas. Their goal is to prepare legislation before the Legislative Session begins in January 2015.

And even if we did manage to show up, it’s not certain that we’d get copies of the documents shared with the senators by representatives of the Agri-Growth Council and the Cooperative Network.

And the only media coverage of the meeting? Behind a subscription firewall at Politics in Minnesota. Bluestem was able to read the article and cite it in our posts, Co-founder of Senate Rural Task Force (est. 2014) attacks MPCA Citizen Board (est. 1967) and All farmers are equal in AGM Food & Farm pledge, but some less equal for Senator Rosen, but other rural friends note that they haven’t been able to view the article.

This is concerning, especially when one of the Senators takes it upon herself to attack one of the members of the Citizens Board of the Minnesota Pollution Control Agency as not practicing “real ag” on the 320-acre family farm that she and her husband have bought from his parents. He grew up on the farm in Big Stone County, studied ag at the U, and always wanted to return to his rural roots. As we’ve noted, the operation was named Big Stone County’s Farm Family of the Year in 2014.

And yet–save for the PIM article behind a paid subscription firewall–there’s no record of Rosen’s denigration of a citizens board member and the farming practices she and her husband have adopted. How might she and her husband–and other farmers practicing “sustainable agriculture” (defined by federal statute for many years)–defend their operations, when no official record exists of exactly what Senator Rosen said?

Is this any way to make policy for rural Minnesota? In an unrecorded meeting, with no minutes or documents kept? How would we ever know? 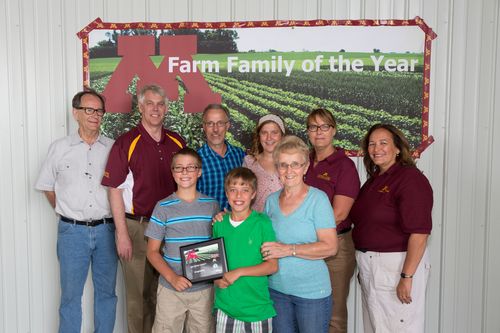 Photos: This velvet curtain is a good metaphor for the transparency of Senate Rural Task Force hearings. Several of Bluestem’s friends have wondered whether–with the restoration of the state capitol building underway and many of the senate media services functions disrupted–whether Senator Bakk and his kindred spirits will help keep more of the public’s gaze away from the sausage making (above); screenshot of the Senate calendar on Monday around noon (middle); the Big Stone County Farm Family of the Year 2014. Kathryn Drager, fourth from the left in the rear row in the picture, is the MPCA Citizens Board member whose farm operation was attacked by Julie Rosen in a Senate Rural Task Force hearing, according to an article in Politics in Minnesota. A Bluestem source who attended the meeting confirmed the account in PIM.(below)