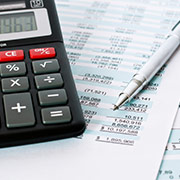 Like Governor Dayton’s proposal and the House tax bill, the Senate’s a tax bill—Senate File (SF) 552—contains a significant income tax increase. The Senate tax bill extends further down the income ladder than the House’s and Governor’s proposals, but stops well short of affecting middle-class families.

In order to target only high-income households, the Governor and House proposals each create a new fourth tier. Under the Governor’s tax proposal, the new fourth tier will include taxable income above $250,000 and will be taxed at a rate of 9.85 percent. This impacts the wealthiest two percent of Minnesota households.

Under House File (HF) 677—the House omnibus tax bill—the fourth tier will begin at taxable income of $400,000 and be taxed at a rate of 8.49 percent. Approximately the wealthiest 1.1 percent of all Minnesota households will be affected by the House’s new fourth tier rate. (The House proposal also imposes a temporary four percent surcharge on taxable income over $500,000 for tax years 2014 and 2015.) 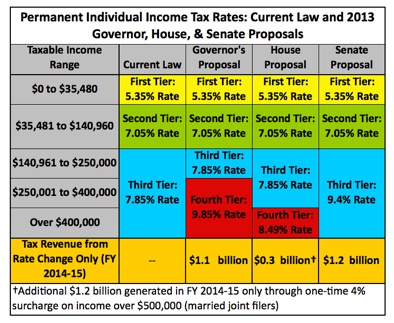 An earlier version of this graph had the $0.3 billion and $1.2 billion on the bottom line incidentally flip flopped. It has since been corrected.

The Senate tax proposal takes a somewhat different approach. Given that the current third tier includes only the top seven percent of all full-year resident filers, Senate leadership decided that there was no need to create another tier to target high-income households. Instead, the Senate opted to increase the tax rate on the existing third tier to 9.4 percent. While the Senate’s rate increase would begin at a lower income level than the Governor’s proposal or the House proposal, it would not be far beyond the range of other proposals considered by the Legislature in recent years. For example, in his February 2011 budget, Governor Dayton proposed increasing the tax rate on taxable income in excess of $150,000.

Immediately the clamor arose from the right that the Senate was taxing the middle class. It is indeed a bizarre definition of “middle” that includes the top seven percent of all households.

An annual income of $140,960—the beginning of the third tier and the threshold above which the proposed Senate rate increase would apply—may not seem extraordinarily high by today’s standards. However, keep in mind that the $140,960 refers to taxable income, which is after subtraction of deductions, exemptions, and other adjustments. According to Minnesota Revenue Department data cited by Senate Tax Committee Chair Rod Skoe, the typical total income (before subtractions) associated with a taxable income of $140,960 is $194,000—which is well beyond the range of what most reasonable people would consider to be middle class.

One of the justifications for increasing the tax rate on high-income households is that state and local taxes per dollar of income for these households is far below what is paid by middle-income households. For example, the top two percent of all households—those that would be affected by Governor Dayton’s proposed fourth tier income tax increase—pay approximately 9.8 cents in state and local taxes for each dollar of income, which is 20 percent less than the 12.2 cents on the dollar paid by middle-income families.* (For purposes of this analysis, “middle-income” is defined as the middle 20 percent of all households by income.)

So what about the top 7 percent of all households—those affected by the Senate’s proposed income tax increase? These households pay approximately 10.2 cents in state and local taxes for each dollar of income.* This is still 16 percent less than what is paid by middle-income families.

Furthermore, those taxpayers at the lower end of the third tier would see only a small income tax increase under the Senate proposal. For example, a household with taxable income of $150,000 (corresponding to a typical gross income in excess of $200,000) would see an annual tax increase of $140 under the Senate proposal—hardly excessive for a household with annual income that is over three times greater than the statewide median.

The standard conservative attack upon any income tax increase is that it would be a “job killer.” However, recent studies from U.C. Berkeley (Zidar) and theCongressional Research Service (Hungerford) find no significant relationship between state income tax increases and job losses or lower economic growth. Using data extending from 1950 to 2013, Minnesota 2020 found that periods following a state income tax rate increase generally coincided with above averagejob and income growth.

The new conservative critique of an income tax increase—that it is hurting the “middle class”—does not fare any better. The Senate income tax proposal is not impacting “middle-income” households by any reasonable definition of the term “middle.” Furthermore, those households that are affected—the top 7 percent—currently have a state and local effective tax rate well below that paid by the average Minnesota family.

Conventional economic theory holds that the smart way to balance a state budget during a recession or a weak economic recovery is through a tax increase targeted to high-income households. This is precisely what the Governor’s, House, and Senate tax proposals do. All three approaches deserve serious consideration as the state struggles to recover from its most recent deficit and a decade of disinvestment in education, infrastructure, and other critical public assets.

*These estimates are based on data for 2010 from the 2013 Minnesota Tax Incidence Study (MTIS). The effective tax rates for the top two percent and the top seven percent are not reported in the 2013 MTIS. However, it is possible to get reasonably accurate estimates of the effective tax rates for both groups by interpolating data from the population decile and income decile tables. The estimates sited here were calculated by Minnesota 2020 using this approach.