Dibble believes that the senate version is superior because it was more properly vetted, includes more penalties for violations of the proposed law, relieves more suffering people, allows better and safer use of cannabis by allowing vaping of the whole plant serves all of the state, costs less and enjoys support from a broad range of medical and health care groups.

Earlier Sunday in an interview with CBS Minnesota’s Esme Murphy, the civil and thoughtful Dibble had said that he was still reviewing the House bill. From the looks of the five-page letter, the Minneapolis senator has been quite thorough in his review.

Governor Dayton has said that because of the neutrality by law enforcement lobbyists on the Melin study bill, he’s willing to sign the bill, which will authorize a state-selected monopoly to serve just over 5,000 people who will be enrolled in an “observational study” that will cost Minnesotans over $4 million across three years.

In January and February, Melin had received positive nationwide attention for suggesting thatlaw enforcement lobbyist resistance to her original bill was motivated by the money from drug-bust related forfeiture and federal Byrne Grant police and sheriff’s departments collected because marijuana is illegal. However, fewer Americans learned that Melin had later pulled her bill —a companion to the senate version–before a committee hearing because of cop lobbyists opposition, essentially quashing the legislation in the House. 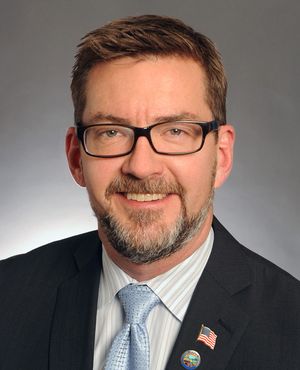 After Dibble’s stronger bill began to be vetted by the committee process, Melin introduced a bill pleasing to the law enforcement lobbyists she had scolded earlier in the session. We don’t believe that was in the Washington Post.

Because of the disapproval of law enforcement lobbyists, Dayton has said he will veto the Senate version, which will allow for the creation of a self-supporting system of up to 55 alternative treatment centers that will ease the suffering of 35,000 Minnesotans across the state.

As a resident of Chippewa County, closer to South Dakota than the Twin Cities, we appreciate him sticking up for suffering people all over the state.

Photo: Senator Scott Dibble, who’s been the mover behind much successful progressive legislation in Minnesota, from marriage equality to anti-bullying.