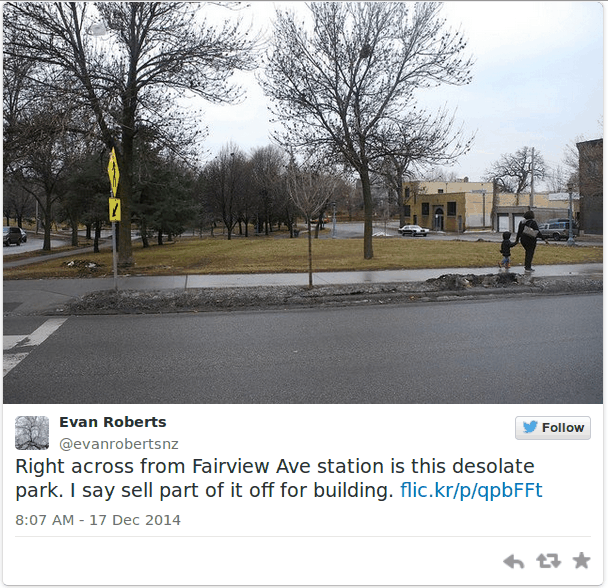 Yesterday on Twitter I suggested selling part of Iris Park in Saint Paul to developers for housing.

The reaction was mixed. Lots of people love Iris Park; I am one of them. One of my favorite runs takes me to the Iris Park neighborhood where I do at least a couple of laps and then, for contrast, run home via the industrial areas just north of University. The southern 2/3 of the park around the pond plus another lawn area is a gem of a park surrounded by an interesting neighborhood.

Now, it’s easy to say that a park in Minnesota looks desolate during a December thaw. But even at the best of times, the front third of Iris Park fronting University Ave is not well designed. It’s open space with a couple of trees, so people could use it for playing except it fronts a two lane road with no parking, so who would take their children to play there? Who would kick or throw a ball that’s likely to end up in traffic? Who would want to picnic in the sun 10 yards from University Avenue? Put some townhomes or a fourplex on this part of the park, and you’d buffer the park from the busy road. With a little fiscal creativity the proceeds from the land sale and some of the property taxes could be dedicated to improvements in the rest of the park.

Taking a wider view selling off Iris Park is not necessary, of course. The area around the Fairview Avenue station is packed with potential for redevelopment. The vicinity of Iris Park is saturated with Car Parks.

Some redevelopment is so imminent that there are faded banners announcing new construction coming soon: Prior Crossing is coming soon. 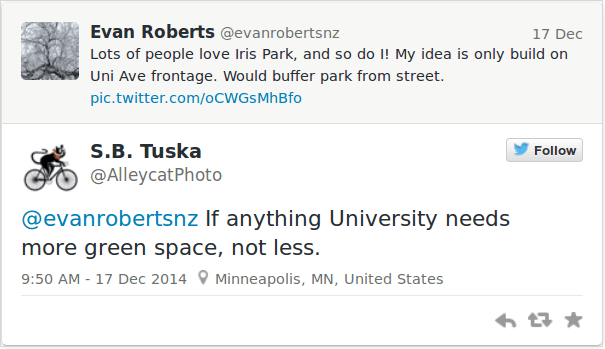 Indeed! But let’s make that green space into inviting plazas, parks and gardens, not just “green space” (to use a term introduced by Andrew Price). At the moment about a third of Iris Park is “green space” that doesn’t encourage anyone to enjoy it. There are no benches, no fountains, no public art, nothing buffering it from the road. Open spaces like Iris Park should become high quality places especially as University Avenue develops.

Iris Park is not unique. All over Minneapolis and Saint Paul there are spaces we call “parks” that are really just unbuilt spaces. For example, here’s Bluff Street Park near the West Bank campus of the University of Minnesota and the Cedar Avenue bridge. Again, a pleasant open space. But the ground is bumpy, the grass is mowed irregularly and it’s hard to imagine what kind of ball game would ever be played on this park. Nor are there any amenities that would attract people to the park for other reasons. I pass by Bluff Street Park several times a week all year round and I’ve never seen anyone on it (In the winter I regularly see foxes in the evening). Why keep land as a park if it’s not going to be a good park? Asking the question “Should we sell parks to developers” doesn’t imply the answer is “Yes.” But asking the question should prompt us to wonder if we’re making the best use of all the land we designate as parkland.