The Phalen Corridor Initiative, started in 1994, began as a collaborative effort between the City of Saint Paul and over 60 community organizations that included the community’s local district councils, job development organizations, schools, and even corporations such as 3M and Wells Fargo.

The Initiative started as a response to the economic downturn of the 1970s and 1980s, when several major plants close in what was once the city’s major manufacturing center. This devastated the community’s economy and left several thousand residents unemployed as jobs left the state and local small businesses floundered. 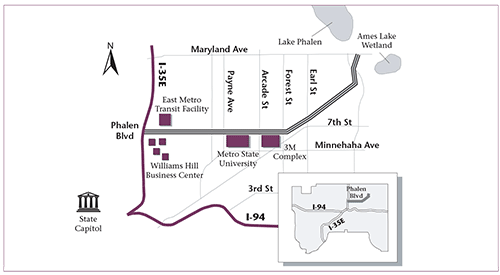 The Initiative’s efforts and successes were recognized in 2005 when it won the two top awards for urban redevelopment at the United States Environmental Protection Agency’s Annual Brownfields Conference. By that time, the Initiative had secured up to $600 million for the purpose of revitalizing St. Paul’s East Side by investing in green space, converting polluted areas into attractive business locations, mixed-housing projects, and connecting schools with a job creating curriculum.

After nearly 20 years of successful collaboration between public, private, and non-profit organizations; the Phalen Corridor Initiative is on the verge of completion with the Cayuga Project, which will result with a replacement for the current Cayuga Bridge, along with several other bridges along I-35E, by the year 2015. The replacement Cayuga Bridge, in particular, will address safety concerns over the current bridge while also allowing for more readily available access to Phalen Boulevard through a better designed interchange along Maryland and University Avenues. Additionally, new programs being completed alongside Cayuga Bridge Project will improve the environmental state of the East Side of Saint Paul by allocating 40 acres as a nature sanctuary that will also act to facilitate the travel of pedestrians and bikers.

The Phalen Corridor Initiative is a great example of the state, local governments, businesses, and non-profits can accomplish when working together and is an excellent demonstration of what local re-investment can bring to a community. Let’s hope that the completion of the Cayuga Project does not mark the end of such initiatives as a whole.