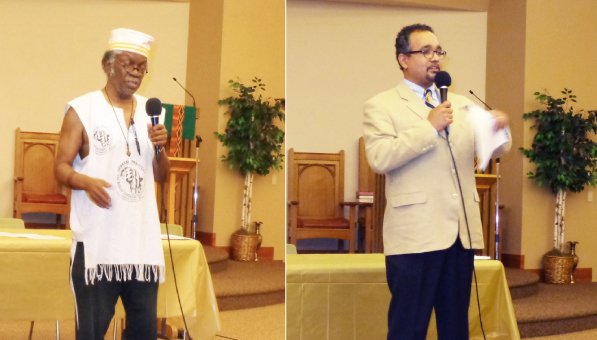 Organizers predict that by the time the “Karamu House,” a monthly forum series which began in June, concludes in December, an action plan for the Black community will be formed.

“If we can leave here with an action step, and the next one we get another action step, by the end of the year we will have it tight and can institute [it],” commented St. Paul NAACP President Jeffry Martin after the second in a series of such meetings July 11 at Camphor Memorial United Methodist Church in St. Paul.

“Let’s understand that document and how important [it is] not only to us, but also to the United States of America.” Not knowing this, especially among Black people, is “our fault and not the schools’ fault,” said the professor.

Martin and El-Kati, who are co-facilitators, both pointed out that there is no set agenda at the Karamu forums. Several persons during the July 11 event brought up education issues for discussion.

“People are going to talk about what they want to talk about,” added the professor. It was St. Paul school teacher Gene Ward, Jr. who suggested the “action steps.”

“At some point we have to start moving forward,” Ward said. “We know that our people have made a difference over so many years, but I think our youth don’t really hear it and see people that look like them.”

“Black people are brilliant people…but as long as someone [else] controls your narrative, you will never be free,” El-Kati told the 50-plus people who attended the Karamu forum. Afterwards he marveled on the turnout. “I thought that maybe 10 or 12 people might turn out. It was a good crowd,” admitted the professor.

“This was a very productive evening because the audience was engaged,” noted Martin.

Camphor is one of seven St. Paul churches that will host the monthly discussion series. “We always want to be a vital part of our community,” said Pastor Gloria Roach-Thomas. “We are a multicultural church and predominately African American, and we want to make sure we take part in our traditions and in conversation about our history. We are so grateful to be a part of this.”

Shiloh Missionary Baptist Church will host the third Karamu House forum on August 11 at 6 pm. Ward said he plans to attend it. “I am going to invite more people. Some people have made the commitment to themselves to bring a youth, or just bring somebody along.”

This, after all, concluded El-Kati, is the ultimate goal — the more that come, especially young people, the more that will be further enlightened.

“Follow us, come with us and learn,” urged Martin.