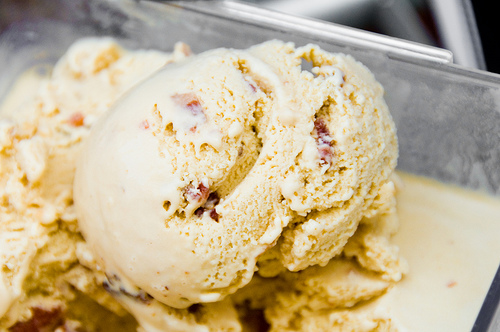 Bacon seems to have hit a tipping point in America in the past few decades. No longer is bacon simply a sizzled savory side dish to eggs and pancakes in the morning. Now it comes wrapped around, dipped in, or topped on just about anything from pizza to donuts to brownies. And it doesn’t stop there. With a little effort, one can find bacon flavored alcohols, coffees, beers, and even toothpaste. It’s no surprise, then, that bacon ice cream is also an available hit attraction for bacon addicts everywhere, and now Sebastian Joe’s lovers need not look any farther than right here in the Twin Cities.

Their new flavor, “When Pigs Fly,” isn’t the first of its kind in the bacon world, but it is a new concept to its creators at Sebastian Joe’s. So new in fact, that although this smoked maple pepper ice cream with bacon chunks made its debut the week before Thanksgiving, the flavor is apparently still in the works because, according to the staff, something keeps failing to come out just right.

As the creators perfect the new flavor, attention continues to be drawn from Sebastian Joe’s kosher keeping compatriots. Rabbi Avi Olitzky, Founder and Director of Supervision of MSP Kosher, says, “People shouldn’t be concerned that it affects the kosher flavors.” The same measures that have been taken in the past to ensure that the kosher flavors of ice cream are in fact kosher will still be used.

One longtime customer, Dori Stein, says, “Knowing how bizarre a flavor the beer ice cream is and how surprisingly good it tastes, I would expect another bizarre flavor like bacon ice cream to taste just as good. A kosher-observing Jew might hear “bacon ice cream” and immediately think pork equals problem, but really any kind of meat, kosher or treif would be problematic in ice cream. When it comes down to it, the kosher flavors are kosher and the non-kosher flavors are just that — not kosher. Whether it’s because the flavor has bacon or other ingredients won’t likely matter to those that eat only the kosher ice cream at Sebastian Joe’s. Perhaps flying pigs will provide kosher bacon. Until then, whether you are a kosher-keeping customer or a bacon lover, there is something on the menu for you at Sebastian Joe’s.

This is a guest post by Monica Routman. Monica is a recent graduate of the University of Kansas with a BA in English Creative Writing. When she isn’t expressing herself through the written form, she can often be found doing so through other mediums.