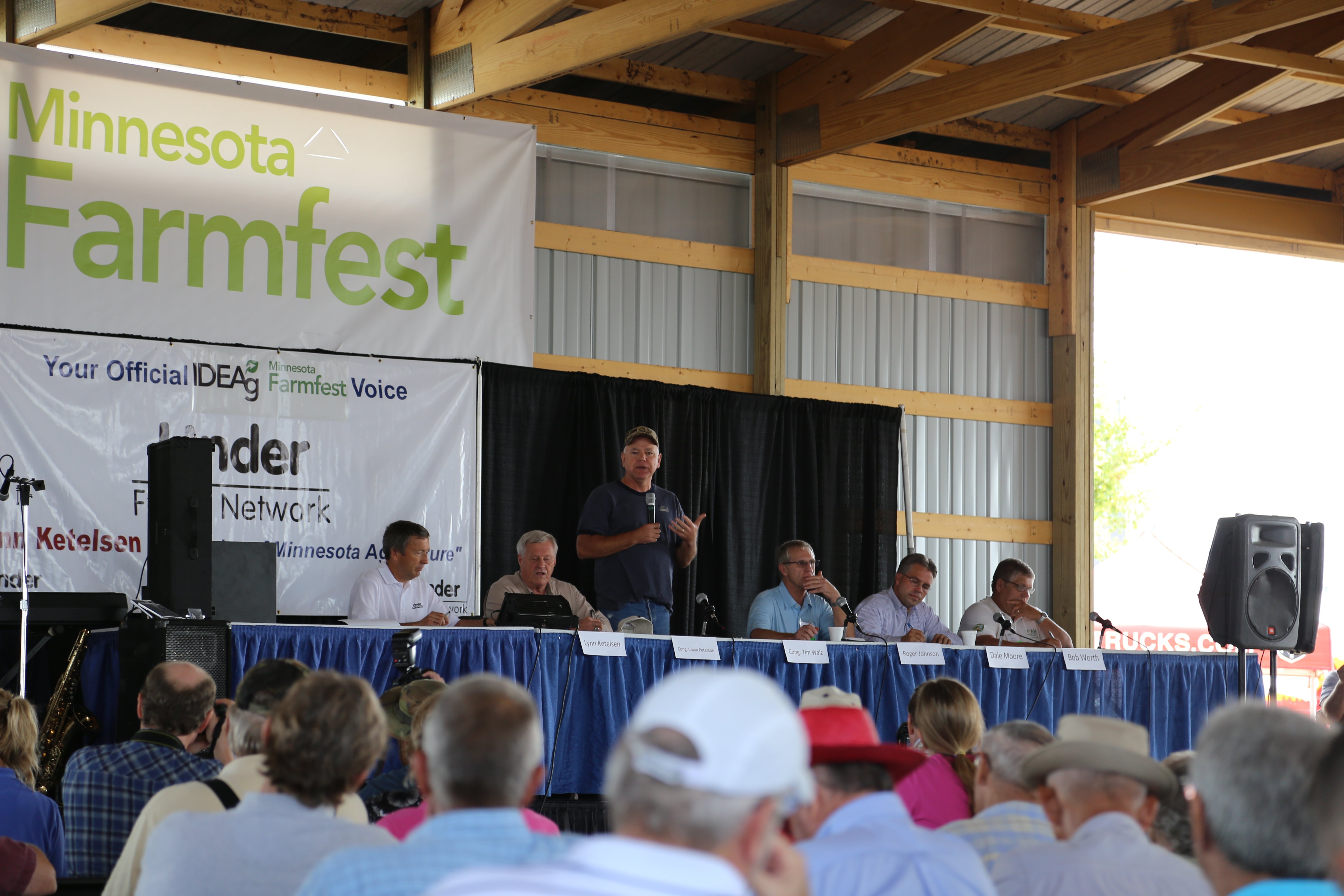 Farmfest is the largest farm show in Minnesota, bringing farmers together to talk about and see the latest in tractors, seeds, and other farm-related equipment. But Farmfest also brings out the politicians to talk about what is happening with agricultural policies and markets. With no farm bill in place, the question understandably on everyone’s minds at this year’s policy panel was “What’s next?” While the policymakers in attendance did a pretty good job of explaining how we got where we are today, the future of farm policy was left unclear.

Representatives Colin Peterson and Tim Walz, both of whom are on the House Agricultural Committee and participated in the policy discussion, gave their perspectives on why Congress still hasn’t passed a Farm Bill. Peterson and Walz pointed to the relatively speedy and nonpartisan work of the House and Senate agricultural committees, as well as the ongoing support of both parties’ leadership; they made clear that the fault didn’t lie there. Instead, the blame was leveled squarely at Eric Cantor and his fellow right-wing Republicans, who broke with their party’s leadership and scuttled the deal that the agricultural committee had developed. Both representatives were quite pessimistic of the possibility of passing a Farm Bill in the remaining months of 2013; Representative Peterson suggested that a 2-year extension was the most likely outcome, followed by many questions about whether we would actually have a Farm Bill (as we know it today) ever again.

While Peterson and Walz reminded the audience that agricultural policy has mostly been able to avoid such partisan battles until now, the ongoing stalemate over the Farm Bill and nutrition programs makes clear that even this sector is no longer exempt. The threat of removing the nutrition programs from the Farm Bill was identified by politicians and farmers to be a death sentence for any future Farm Bill legislation. Others recognized the split as potentially contributing to the growing perspective that agriculture is a special interest. Dale Moore with the American Farm Bureau reminded Farmfest attendees that the nutrition program is an integral part of the Farm Bill and should remain—not solely for political leverage with our urban legislators, or because it is our moral obligation to put food on the table for those less fortunate, but because 23 cents of each dollar go back to farmers.

Despite the grave circumstances of what many panelists agreed to be one of the strangest Farm Bill processes ever seen, Representative Walz did speak with optimism and conviction that we can come up with policy that is “viscerally smart, that keeps to our moral values and that creates prosperity for our community by coming together.” While most of the discussion was about the details and missteps in the policy work, Walz did volunteer what he saw as the more basic cause of the failure of this policy and many others. He suggested that the real source of the disfunction in Congress was redistricting. Led by state legislatures, there has been a widespread redrawing of House districts in recent years that has resulted in many overly partisan and “secure” districts. Such politically homogeneous electorates—whether on the right or on the left—do not, from Representative Walz’s perspective, provide the right environment from which politicians can emerge who understand and respect the role of compromise in politics and policy. As a result, we lack politicians who authentically represent their districts in their overt unwillingness to negotiate or understand alternative positions to their own. Representative Waltz urged the crowd to crank up the heat on legislators who are unwilling to understand that “compromise is not a capitulation of your values, it’s the glue that holds the democracy together.” Quoting Ronald Reagan, Walz continued, “if they can’t see that light, at least make them feel the heat,” and urged Farmfest attendees to put pressure on legislators to pass a Farm Bill to give the American people the certainty they deserve.

Bob Worth, Vice President of the Soybean Growers Association, said that it is really the next generation of farmers who have the most to lose with no Farm Bill in place. Our beginner farmers don’t have the equity—they need the safety nets, the certainty and the support programs. Too many in Congress, according to Dale Moore, fail to understand that we don’t write Farm Bills for the good times, Farm Bills are for the bad times. In the midst of’good times for agriculture—at this 32nd annual Farmfest, boasting a record 600-plus exhibitors—Moore’s point hopefully served as a subtle and timely reminder. While we get rightly frustrated with the long-delayed and politically divisive Farm Bill process, it is important to recognize the important role this piece of legislation plays. At its best, farm policy could help create a diverse agricultural economy that generates public goods and services through integrated programs for conservation and production, build resiliency in agriculture and strenghen the safety net we need for a reliable, safe and accessible food system.

At top: Representative Tim Walz addresses the crowd at the 32nd annual Farmfest.