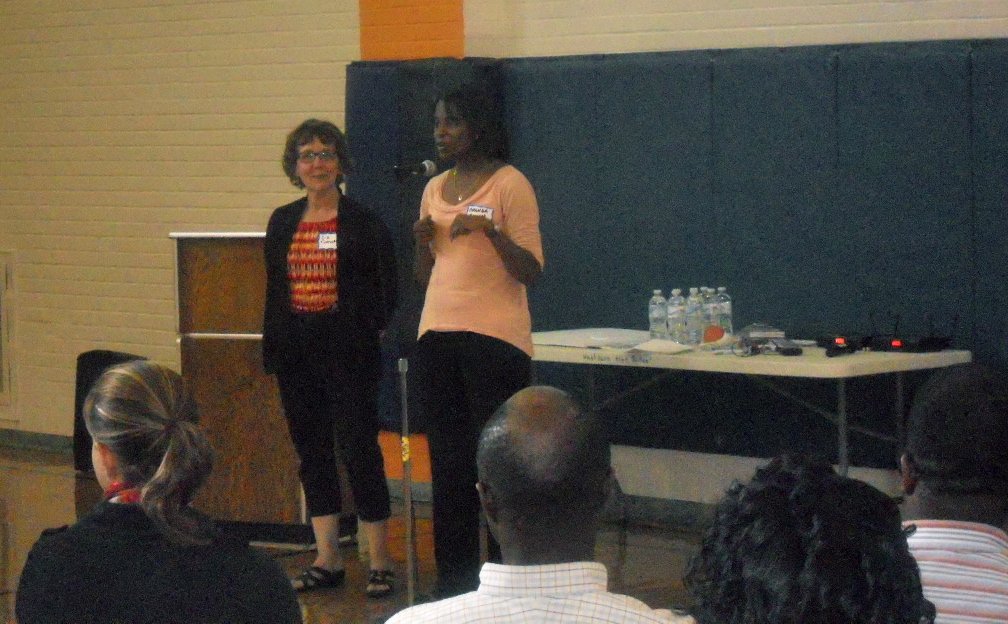 Washburn High School has had a tough year. During the 2012-2013 school year, high profile student misconduct with racist overtones, student protests, and a dispute between the athletic director and principal led to the sudden removal of principal Carol Markham Cousins. In the aftermath of these incidents, many in the Washburn community in Minneapolis anxiously wondered who would become the school’s new principal.

On August 1, the Minneapolis Public School district announced that Patrick Exner, who had been working as an administrator at Ubah Medical Academy charter school in Hopkins, would be Washburn’s new principal. By August 8, he was removed from the job amid allegations that he falsified test scores in his previous post at Ubah Medical Academy, and later disclosures that his resumé contained some exaggerations.

This rolling tide of events led the district to hold a community meeting at Washburn on Thursday, August 15, in order to address the hiring and immediate firing of Exner, and to assure community members that the school will be ready to welcome students for the 2013-2014 school year. About 200 parents and community members gathered in the Washburn gym to hear from Superintendent Bernadeia Johnson, parent leaders, and interim Washburn principal Linda Conley, among others.

Sarah Lahm attended the August 15 meeting both as a Washburn parent and as a reporter. See sidebar for her personal reflection.

Parent leader Brenda Lynn spoke first, adhering to a carefully laid out agenda. Lynn spoke earnestly to the parents in attendance, telling them that the “community must get itself in order,” and that the “district has promised many things, and we will hold them to it.” Bernadeia Johnson, new Assistant Superintendent and former South High School principal Cecillia Sadler, and current Washburn staff leaders then gave brief overviews of the situation, with Superintendent Johnson acknowledging that “2012-2013 has been a very difficult year,” and that the “district can and must do better.”

The meeting took a less-scripted turn when the floor was opened up for questions. With moderator Radious Guess at the helm, many parents and community members spoke up and asked pointed questions about how and why Exner was chosen to lead Washburn. When a parent asked why Exner was the only candidate interviewed for the position, Superintendent Johnson said that he seemed to have the appropriate qualifications, such as working with a diverse population of students, although she later acknowledged that Ubah Medical Academy has a very “monolithic” student population. Also, she noted that there is a “national demand for principals,” and that it is especially hard to get a principal for an “urban school.”

Further audience questions were varied in nature, echoing the turmoil that has gripped Washburn since last winter. Some spoke of a desire to move on and focus on Washburn’s strengths, with one man asking, “What can we do to recoup our image?” in order to prevent “our families from leaving.” A woman in the crowd, however, spoke of deep dissatisfaction with the Minneapolis school district, saying she had seen many principals come and go and wondered about the district’s ability to attract and retain quality candidates. A few other questions focused on what the district, and Washburn, were doing to make sure students would be offered “challenging” coursework.

The need to rebuild trust, to bring “transparency,” and more “intentional” action to the school and the community at large emerged as a theme during the night. Finally, the meeting ended with both attendees and school and district officials seeming exhausted at the range of questions and concerns that were raised. Those in attendance voiced several seemingly contradictory strains: Washburn is a great school, Washburn needs a PR person, Washburn is an unsafe school where punishments are handed out unfairly, Washburn is being run by a “tight team” that collaborates well, and so on.

The issue of whether or not Washburn is academically enriching enough came up, as did the desire to continue focusing on “equity for all.” Many have suggested that former principal Carol Markham Cousins’ inability to meet both of these needs is what really led to her ouster. Any principal will face the challenge of leading a diverse school community and engaging not only the students who are ready to soar, but also those who may need a significant hand up in order to succeed.