I’m sorry, but saying that the Green Revolution saved millions of lives is unscientific. 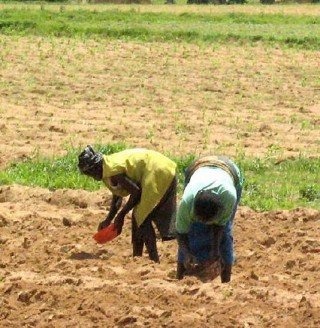 Ambassador Kenneth Quinn, the president of the World Food Prize Foundation, recently made this widely repeated, but unscientific, claim in responding to columnist Rekha Basu. Basu recently criticized the foundation for awarding this year’s World Food Prize to three scientists who helped invent crop genetic modification. (Two of who are current or former vice presidents at Monsanto and Syngenta.) Quinn notes that the founder of the World Food Prize, famed Green Revolution researcher Norman Borlaug, specifically encouraged the foundation to consider these three scientists before his death. In his piece, Quinn admonishes Basu that “Dr. Borlaug would tell us it is our responsibility to use the power of science” to help solve widespread malnutrition. He does this shortly after lauding Borlaug as “the man who saved millions from famine and death in India and Pakistan.”

The reality is more complicated. And using careful social science and an examination of the history around the Green Revolution (AKA evidence), it is clear that Quinn’s statement is at best controversial and incomplete; at worst, it has been (at least in the case of India) disproven. The problems with his statements are related to at least two broad oversights, and these two things are crucially important if we want a future with a sustainable food system that is fair to farmers and healthy for eaters.

Humans have very strong tendencies for certain kinds of cooperation. Economists Samuel Bowles and Herbert Gintis have called these “strong reciprocity and basic needs generosity”—in other words, a tendency to trust, share and cooperate with those who share and cooperate with us, alongside a willingness to personally pay to punish those who violate this trust; and “a virtually unconditional willingness to share with others to assure them of some minimal standard” of living, especially through the provision of essential goods. (For those of you skeptical about these claims, Bowles and Gintis have literally written the book on human cooperation; their combination of history, psychology, economics, political science, evolutionary biology and mathematical modeling is hard to argue with, in my opinion.)

What does this have to do with anything? Well, in the long and short I’d argue many of the improvements in well-being (access to food, health, equity) are the result of peoples’ struggles based on these deeply human drives for (certain kinds of) justice. The many social movements and revolutions in human history, and the expanding understanding that all of our fellow human beings are in fact our fellow human beings, and not innately inferior or less deserving of rights, is at least as important as “science and technology” in improving the lots of many (though not all!) humans over the past centuries.

As important as science and technology are to human well-being, the list of important changes that are not solely or mostly due to technological change is notable: the end of outright empire and colonialism, the end to slavery and the slave trade, the end to the U.S.’s de jure system of repression under Jim Crow, ending the South African Apartheid; the improved socioeconomic status (and therefore health and well-being) of many former immigrant populations (e.g., Jews, Italians, and the Irish in the U.S.); increased suffrage for women and minorities around the world—science and technology played roles, good and bad, in all of these cases, and sometimes they represented one of the forces brought to bear in equality, but in ALL cases, the striving of oppressed groups and their allies for social and economic justice was pivotal. 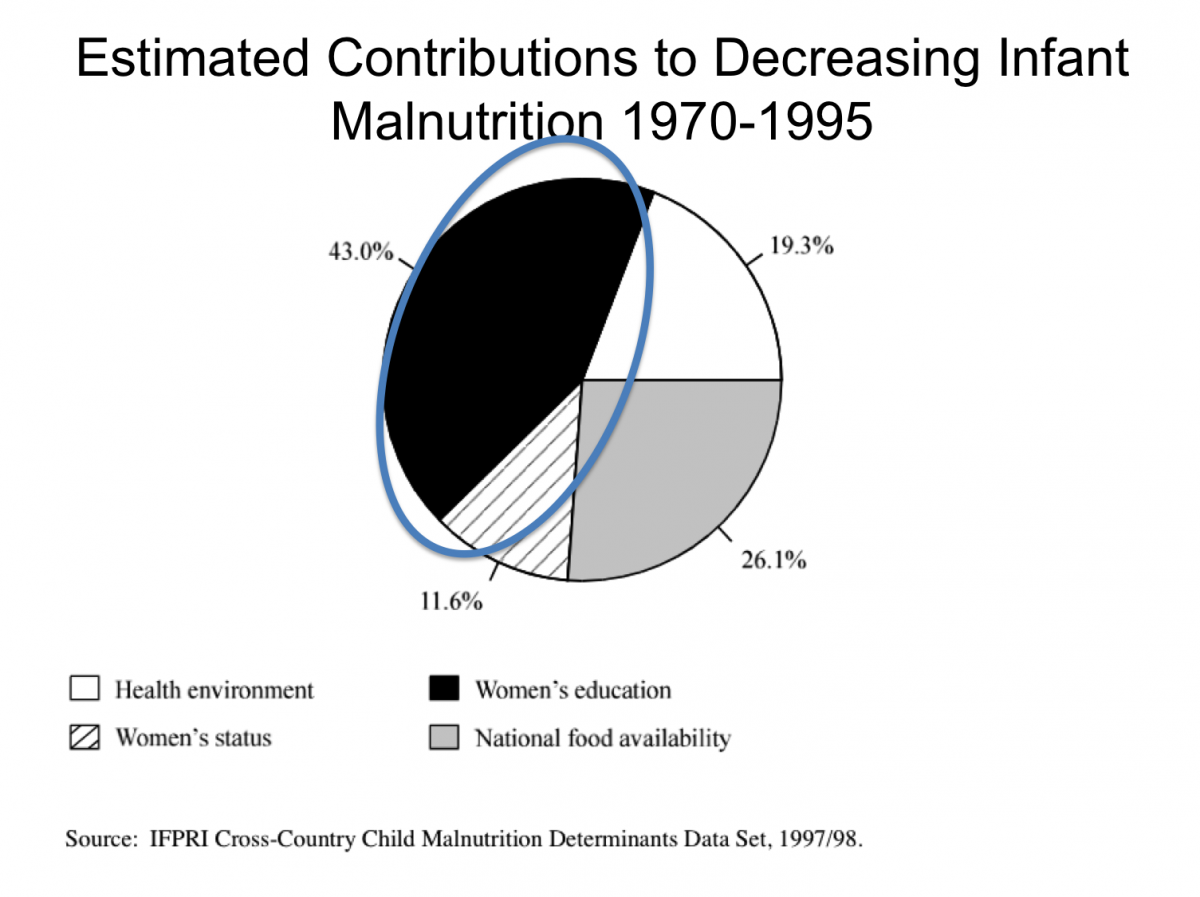 What does this have to do with food? In short: the most powerful remedies to malnutrition and hidden hunger are and have been food sovereignty, and political sovereignty and equality more broadly. They are essential to get and to protect the right to a fair share of the food available in any society. In recent (and less recent) history, they are the most important element because in the majority of cases, enough food has indeed been available. Nobel Laureate economist Amartya Sen has been at the forefront of pointing this out—that (a lack of) sociopolitical rights predict hunger far more than presence or absence of enough food. Nowhere is this perhaps more visible than Smith and Haddad’s landmark study, “Explaining Child Malnutrition in Developing Countries: A cross-country analysis,” which found that over half—54 percent—of the decrease in infant malnutrition in developing countries between 1970 and 1995 was due to improvements in women’s status and women’s education (see figure 1). They also found that, at educational parity, women’s education could reduce infant malnutrition by three times as much as raising agricultural production to optimum levels. (see figure 2). 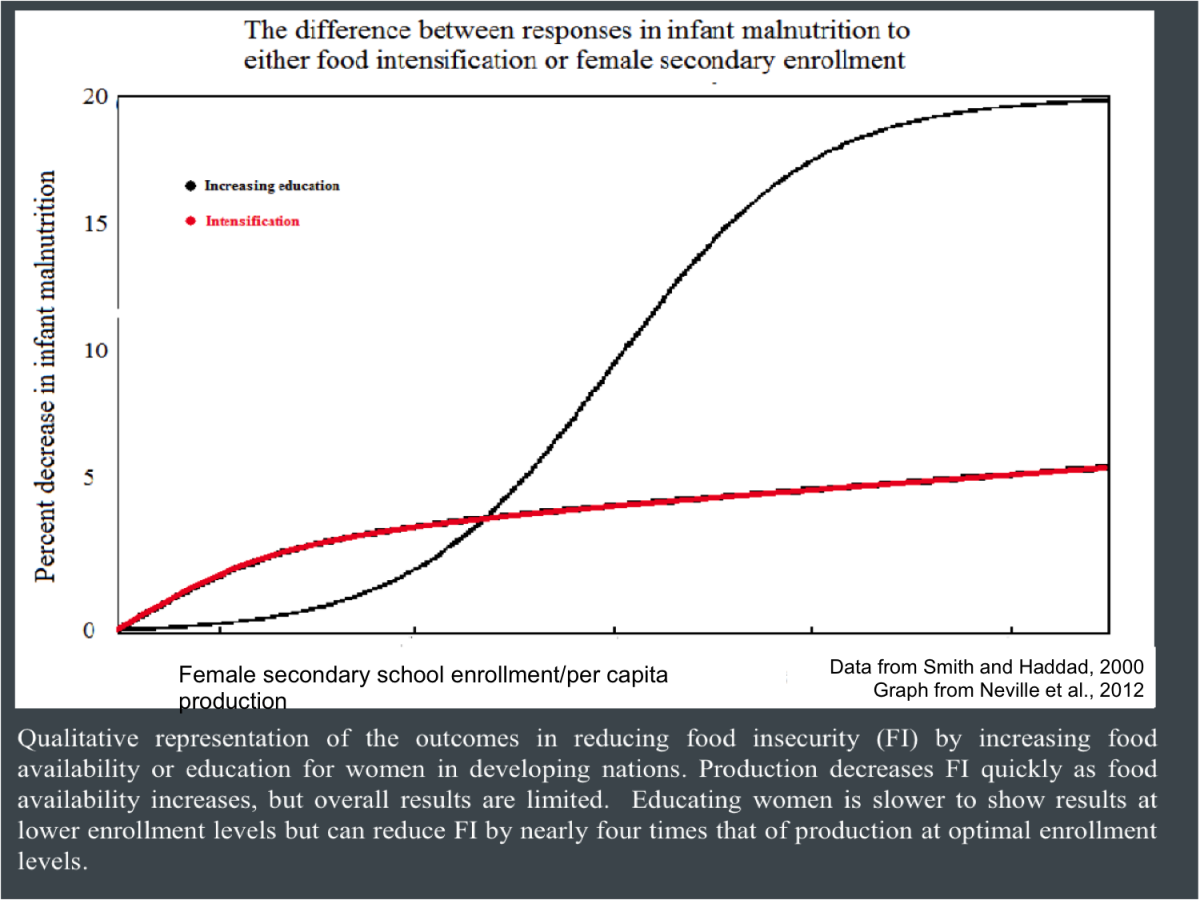 People have fought hunger and repression. Science and technology have been tools used to support—and to block—this fight. Without social movements, they are not enough—not nearly.

2.) Saying “A then B” does not count as evidence: Science doesn’t support the “Green Revolution fed millions” narrative.

If you were wondering what a controversial statement might look like, that’s probably a good one for you. It is widely “known” that the Green Revolution, particularly the hybrid crop varieties and packages of “improved” seeds and fertilizers saved millions of people from starving. The calculations for this are simple: productivity went up, number of hungry went down. A (increased productivity) must have caused B (decreased hunger), right?

Well, um…no. This is not how science works—while this is by no means a SILLY conclusion to make (unlike the Pirate Loss Theory of Climate Change), it is also not a proven one. Observing two things change at the same time, that seem like they should be related, does not prove one causes the other; science is the hard work of developing and analyzing real evidence around such relationships. Science is not blithely asserting the same (highly intuitive and likely seeming) idea again and again without assessing the nitty-gritty details.

And what do the details tell us? You won’t be surprised that (in my analysis) the nitty-gritty details show that the Green Revolution was NOT a primary cause of decreased hunger.

If this idea causes you to spit your coffee out, a.) IATP is not liable for the damage to your computer, and b.) you’re welcome to contest this using science:detailed and careful study of the evidence. One such attempt at a study, Evenson and Gollin’s “Assessing the Impact of the Green Revolution, 1960 to 2000” essentially says “it’s hard to imagine how else you could’ve made all that food.” Leaving aside the question of imagination, “it’s hard to imagine how else you’d do it” is, let us say, a very low level of scientific evidence. Especially since well-regarded researchers have presented strong evidence that in India, the Green Revolution “mainly led to the replacement of cut-rate American wheat with Indian-grown wheat… I’m thinking that India wouldn’t have starved even without the Green Revolution”*; and that “the [Indian] state could not rely on the GR [Green Revolution] for poverty reduction and thus started a ‘direct attack’ on poverty” (poverty being the primary cause of hunger). And, as I’ve previously written, India alone continues to be home to more malnourished people than the entire continent of Africa.

In fact, between 1970 and 1990, the number (though not proportion) of malnourished people in the world increased if you exclude China, even though world per capita food production went up. China, the exception, saw a decrease in the number of malnourished by 217 million. And the mechanism for this? Researchers from the FAO and the International Food Policy Research Institute (IFPRI) found that land redistribution and education (for rural women in particular) had the biggest impact on rural poverty reduction and inequality. These improvements in distribution, equality and education themselves caused (not resulted from) additional increases in productivity.

It is uncontroversial among hunger researchers that more production (or productivity) does not decrease hunger (or poverty) by itself. Now, of course, this consensus may be wrong, or the Green Revolution an important exception to the rule. But I have seen little evidence for the “GR saved millions” narrative that is, frankly, much stronger than the Pirate Loss Theory of Climate Change. “This makes sense to me in my head” is NOT science. “I can’t imagine things working out differently” is NOT evidence. The GR and Dr. Norman Borlaug Fed the World narrative is over-simplistic and under-scientific.

The issues we’re dealing with in the food system are complex and challenging. And while the often heated scientific conversations about what to do about it are important, they need to go beyond (WAY beyond) production = hunger reduction. They need to go way beyond technology and science. Without a moral, ethical and social movement–based understanding of how equality and improvements actually come about, we could continue on into a future where we produce even more food, but just like today, throw away one-third of it; have one in seven people eating nutritionally empty food that hurts their health in the long run; and one in seven people without adequate agency and access to enough food to sustain their most basic health. Let’s commit to leave this kind of world behind us.

*This quote is from the blog of anthropologist Glenn Davis Stone. He is referencing for evidence, however, John Perkins’s Geopolitics and the Green Revolution, which was published by Oxford University Press in 1997 and reviewed here at IATP in 1999.

At top: Researchers found that land redistribution and education (for rural women in particular) had the biggest impact on rural poverty reduction and inequality. (Used under creative commons license from MikeBlyth)