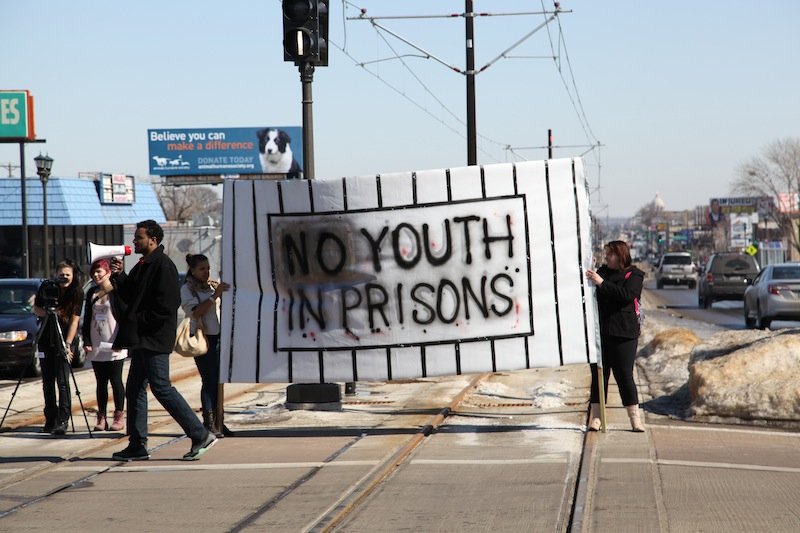 Twin Cities youth and their adult allies received supportive honking and shouting from drivers as they gathered with banners at the intersection of University Avenue and Lexington Parkway in St. Paul on March 13. Their aim: to raise awareness about discipline concerns in schools and to demonstrate against the school-to-prison pipeline.

This was the second rally organized in recent weeks by the NAACP St. Paul Youth and Collegiate Branch. The first was a rally and march from Central High School to St. Paul Reformation Lutheran Church on February 26.

Surrounded by a group of students and supporters chanting, “school-to-prison pipeline, stop, stop, stop,” Maya Jones, a 17-year old student at Central High School and member of the St. Paul chapter of the NAACP, explained a little about how she views the school to prison pipeline. “By suspending students instead of having to help them figure out why they are getting into trouble in school, and the more students that are suspended, the more likely they are to end up in prison,” she said.

Jones said that the NAACP is partnering with Save the Kids and MN Neighborhoods Organizing for Change (NOC) to create future events to raise awareness about these issues.

CORRECTION: It’s Save the Kids, not, as originally written, Save the Children. Thanks to Anthony Nocella for the correction.