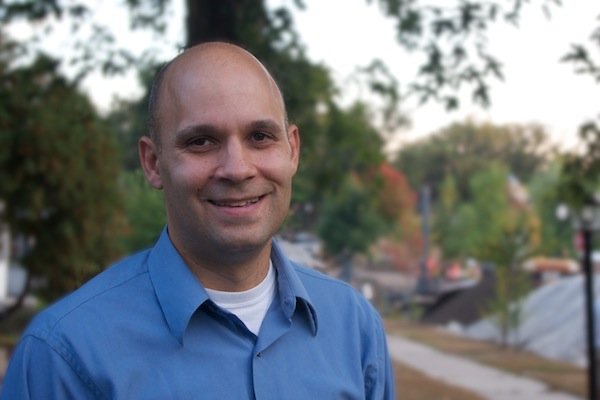 Growing up, Nelson Inz wasn’t a great student. Because of his father’s Huntington’s disease, which affects impulse control, Inz experienced an abusive household at a young age, which inhibited his schooling.

When he became a teacher, he realized that when kids struggle outside of school, they need extra help getting up to grade level in reading or staying engaged because of outside factors. Inz hopes to bring that personal experience and knowledge to his campaign, running for Minneapolis school board in District 5 this year.

Inz believes in the power of public schools to be an instrument of social change, he said, which is why he became a teacher in the first place. Previously, he had been a bartender but got involved in a minimum wage campaign during the Pawlenty administration, writing a letter to his state senator and testifying at the capitol in 2005. That experience taught him a lot about government and power, he said, and he began volunteering in schools as a way to show students what he had learned about advocacy.

Inz ran for state representative three years ago, with education being his main platform. Eventually he became a substitute teacher before getting his teaching license from Hamline and has been teaching ever since.

When he first started teaching at the charter school Tomorrow High School, Inz felt frustrated at his inability to make a difference in the student’s performance. But Tomorrow High School director of skills Claude Maddox told him that teachers have to believe students can be successful, otherwise there’s no point in trying to teach them. That idea is now at the core of Inz’s teaching philosophy.

Inz believes he has an understanding of the issues facing public schools “from being on the ground and in being in the classrooms,” he said, “and being in daily contact with students.” Trained in adolescent Montessori education with an IB in three different disciplines, he currently teaches at Great River Montessori High School, a charter school in Saint Paul. There he has served on the board and has acted as chair of the personnel committee.

Because Inz has worked in both public schools and charter schools, he said he believes he understands the ongoing debate between which types of schools are best for students and the state. And in his campaign, he said he wants to highlight student-centered education.

With holistic student-centered education, the education needs to be more of a priority than the testing, he said. That doesn’t mean that testing isn’t important, but kids need a mix of tools to keep them engaged in learning, he said. In addition, Inz said he feels that the district needs to focus on lowering class sizes and reducing the reliance on testing and narrowing curriculum. “You have to have some testing, obviously,” he said, “but you can’t base your entire educational philosophy on limited results.”

Minneapolis Public Schools have made progress in recent years balancing the budget and passing an enrollment plan, Inz said, now they need to take the next steps, such as increasing grants while allowing schools to retain their sovereignty over the programming. Inz said that he thinks Minneapolis Public Schools superintendent Bernadeia Johnson has done a good job doing that so far.

MPS recently received a grant from Cargill for the district’s Avid program, he said, and Johnson successfully won funding for another program Minneapolis was already doing.

As a board member, he hopes to keep a keen eye towards possible grants, making sure that any funding the district receives doesn’t allow outside groups to define the school board’s policy. “If you want to fund it, awesome, but we’re not going to let you tell us how to run the programs,” he said.

Inz said he also hopes to help bridge the gap in communication with families. But most importantly, he wants the students to know they can come to him and feel like they’re making a positive difference in their schools and their voices are being heard.

“I want them to know they have access to me,” he said. “It’s important to engage with families but engage with students as well.”