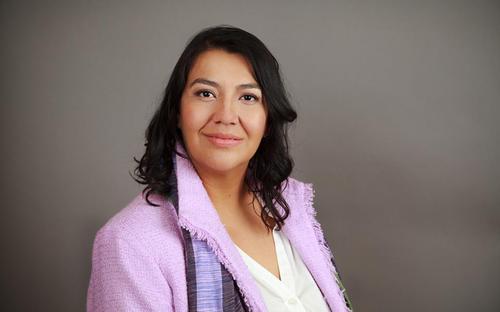 “Most people identify me as a janitor’s daughter that went to Cornell,” said school board candidate Iris Altamirano. A woman who beat the odds in her own life, Altamirano decided to run because, as a mother of two young children, she’s concerned about the opportunity gap. She believes she has the skills from her career as an organizer to make the district better for all students, especially from marginalized communities. “Minneapolis is a great city and we do a lot of great things and we are leaders in the country on a lot of amazing things,” she said. “I just think the opportunity gap should not be one of them.”

Many people like her message. Endorsed by the Minneapolis DFL, Altamirano’s campaign has also gotten the endorsement of four current school board members, five city council members along with several state senators, and representatives. She’s one of the candidates running for the two at-large (citywide) school board seats. Also on the ballot in 2014 — Districts 1, 3 and 5.

Born and raised in Texas, Altamirano, whose first language was Spanish, got identified as gifted when she was six years old, because of her artistic ability. “That ability gave me confidence and made me feel special and made me know that I was special in some way,” she said.

As a district, Minneapolis Public Schools (MPS) needs to help children “find their passions,” she said, in the same way that she was able to tap into her talents. “We need to prioritize enrichment programs, language programs, arts programs, sports — I think, where we can, even technical and vocational tracks — and really set our kids up to find a passion.”

In a time when arts and similar programs are underfunded, Altamirano said the district should strengthen its connections and communications not only within the district, but outside of it as well, such as connecting to the parks or libraries. Seeing the arts as a skill set that’s “equally important” to math or science, she wants schools to teach children to “live beyond filling in a bubble.” She emphasized that “critical thinking and innovation and being able to communicate in multiple languages and being able to adapt to a situation or to our society” are important.

Altramirano also believes that prioritizing early education, through efforts such as expanding the High Five program, will come through building relationships outside of the district. “We have to work with state and other agencies on the county level, on the city level,” she said. As a city and regional planning major, “I understand big picture and how to connect the resources we have in our city.”

Raised as a Spanish speaker until she learned English in school, Altamirano now speaks three languages, including Italian, and wants to see languages emphasized in schools, as well as a focus on multicultural curriculum. “We all have a story to share, and a viewpoint and a lineage that we are proud of in some cases, and I think it’s important for children to learn about themselves,” she said, “but I think it’s even more important for children to have access to role models that they can consistently see throughout their lives.”

For students from marginalized communities, Altamirano sees role models as an important piece of the puzzle. “I don’t mean just by skin color. I don’t believe that just having a certain skin color is going to meet the right needs of a child,” she said. “I think that having at least the possibility of many skills and beliefs and opinions and colors is really what’s going to allow our kids to be able to pick and choose and be able to say, ‘I never thought about it that way, but maybe I can do that.’”

To allow for a more diverse teaching workforce, Altamirano sees two things the district could do. The first is to create pathways for the paraprofessionals who are “already in the classrooms, already have relationships with the kids, already know the school, already are part of the community, to command their own classroom.” In addition, the district needs to be “very intentional” and have a “long term type strategy,” in terms of pulling from Minneapolis’s diverse student body. “We don’t need to go anywhere else,” she said.

After getting her degree from Cornell, Altamirano became a community organizer. She said she realized early on that political organizing was “critical work that needed to happen.” In 2006, she became part of the first Wellstone Fellowhip program before eventually working as a political director and union organizer for SEIU 26, which includes the janitor’s union.

Altamirano took a break from her organizing and political work and had two children, who are still not yet school age. As they are getting older, she sees education as the next chapter of her social justice career. “I do see education as a social justice and civil rights issue,” she said.

Altamirano believes her skills as a community and political organizer will work in her favor as a school board member. Believing openness and honesty are the keys to any relationship, Altamirano said she’d approach the job on the school board “as a mother would,” with “an open mind.”

On her website, Altamirano states that, “Unionism is in my blood.” At the same time, Altamirano said in an interview that it’s important to “understand the role of the board” in regard to negotiating contracts. “It’s the union’s job to advocate for the union and it would be my job to create a work environment for teachers who are on the front line,” she said, “but keeping in mind why I was elected to be there which is the best interest of the child.”

Growing up, Altamirano often felt the force of the obstacles that faced her because of who she was and where she came from. “I always felt like I was swimming against a really strong current and the current was strong because I was poor, because I was ELL and because I was Brown,” she said. She attributes her success to the people on the banks throughout her life “throwing me life jackets,” she said, “or even swimming next to me when I didn’t think that I could any more.”

As a school board candidate, Altamirano hopes to fight for a system where children not only feel like they can swim against a really strong current, but also have role models, teachers and community who believe achievement is possible. “When people feel a sense of belonging, that takes you a long way,” she said. “I really believe that it shouldn’t matter if you are from North Minneapolis or South Minneapolis or if your first language was Spanish or English or Hmong or Somali. We know that we all need to work together to produce better outcomes for our kids.”