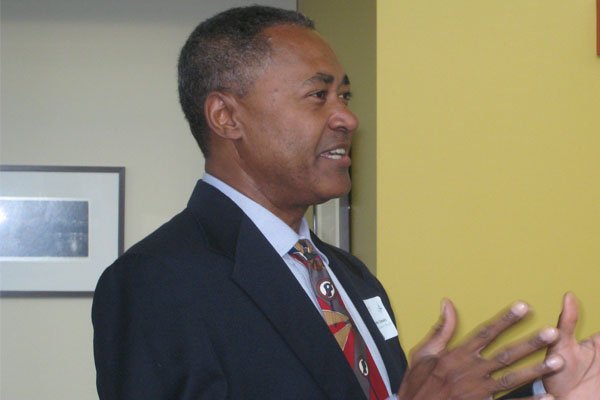 After giving up his Minneapolis city council seat, which he had held since 2003, to run for mayor last year with an ambitious education platform, Don Samuels now throws his name into the ring for at-large school board member. He hopes to bring his deep connections within local and state government to support the superintendent’s agenda in fighting the achievement gap. “I’ve been staring this monster in the face forever with two hands tied behind me,” Samuels said of education issues. “I’ve been on the sidelines of this thing for a long time, and I just want to be in the middle of it.”

Samuels ran for city council over a decade ago when former city councilmember Joe Biernat stepped down after receiving five felony charges. Samuels had just finished seminary in 2001, and was planning to start a ministry on his street in North Minneapolis for kids living in poverty. His neighbor, Bill Alum, woke him up one morning to urge him to run for the council, telling him that North Minneapolis didn’t need another pastor, but instead needed a leader “who understands what’s happening.”

While on the council, Samuels said, he introduced to the city a program called Results Minneapolis, a data-driven system of performance analysis, where the city collects data from every department and analyzes the data. “If we’re not on track, something has to change,” Samuels said. Samuels also suggested the idea to Superintendent Johnson, and the city loaned the program’s developer to the school district for six months to create a similar program for the school district. As a school board member, Samuels hopes to push the district to analyze that information “and make changes in an ongoing way,” he said.

Much of Samuels’ legacy on the council has involved issues of safety, he said, but outside of the council he also helped start the Peace Foundation, a nonprofit organization aimed at confronting violence. Samuels stepped down as president of the Peace Foundation in 2005 amidst criticisms there was a conflict of interest. This issue became a major sticking point in his election battle with Natalie Johnson Lee, whose ward had been redrawn. Samuel’s wife, Sondra Samuels, assumed leadership of the organization, which in recent years shifted its focus towards education and supporting North Minneapolis families and children from birth to college. Renamed the Northside Achievement Zone (NAZ), the organization won a $28 million federal grant in 2011. Samuels said that if elected, he would recuse himself from any decisions surrounding NAZ, which has a formal partnership with Minneapolis Public Schools.

Samuels also helped form Hope Collaborative, an initiative that brought in leaders of successful schools around the country working in neighborhoods with similar demographics to North Minneapolis to talk about how they achieved success to community members and school board members. “The idea was to bring people in the community who were facing the most serious problems in their community and were having results,” Samuels said, “and to demonstrate to the community that we can do it too.” The series of discussions initiated by Hope Collaborative had influence on the superintendent’s strategic plan, according to Samuels.

What the Hope Collaborative found, Samuels said, is that in order to attract the best students, schools have to have high achievement. As an example, he cites the Harlem Children’s Zone, which is in a crisis right now because it’s so effective, upper and middle class families are moving into the neighborhood that it’s based in and poor people can’t afford the homes anymore. “If you want to attract high achieving kids, or if you want to attract middle class back into the city, into neighborhoods that are now called challenged, you need to have high achieving schools,” he said.

For his own family, education has been the first priority for his children, even above safety. His family moved into Jordan neighborhood because “we believed that the flight of the Black middle class is a major contributor to the plight of communities like this,” he said. However, while he and his wife Sondra intentionally chose to live in one of the most challenged neighborhoods of the state, he chose to send his son, from a previous marriage, to private school.

“When my son became school age I would go to the district in whatever city I lived and ask for the performance of kids according to race,” Samuels recalled. “They’d give me these charts and always the Black kids were at the bottom line, and I just said I’m not willing to subject my son to this. So he was in private school all his life.” His oldest daughter, who is 21 and now living in New York and working as a model, attended both city and suburban schools and his youngest daughter attends Minneapolis Public Schools at Anthony Middle School, which, because it’s not her neighborhood school, requires Samuels to hire a driver for her to get there when he is unable to drive her himself. “So for me, safety comes second,” he said, “and I think there are a lot of parents who would see the world like that. They’d go through the jaws of hell to get their kids to live up to their potential.”

Samuels, who famously told a reporter in 2007 “I’ve said, burn North High School down,” said that the district today “is in dire straits,” with one of the largest achievement gaps between people of color and white kids in the country. However, Samuels also believes the district is “in a position of humility that is unprecedented.” As a theologian, he finds that to be the first step toward transformation.

Since America created the achievement gap, Samuels believes we have a responsibility and obligation to fix it. “It flies in the face of who we are as Americans,” he said. “We created the achievement gap through slavery, through Jim Crow, through exclusionary practices which have become institutionalized in the culture and internalized in families that are trapped in it. So we must do now whatever it takes to reverse it. If we do not do that, we have settled for the injustice we have created.”

In the mayoral election last year, Samuels ran as the “education mayor,” which he admits seems inconsistent with the charge of the mayor’s office under Minneapolis’s current charter, but he believed he could have a voice of influence on every aspect of the city, using the “bully pulpit” and collaborations to make changes.

As a school board member, Samuels plans to take a similar approach. Believing Superintendent Bernadeia Johnson “is on the right track,” she needs the school board to “be the wind beneath her wings,” to achieve success, he said.

To provide the kind of strategic help the superintendent needs, Samuels plans to call on his strong relationships across the city and state, in addition to using a “bully pulpit” approach. “I understand the importance of communicating, of being vocal, of staking out a position on things and repeating it frequently, and I think I also have a reputation of putting myself out there if no one else will call it that, meaning not shrinking from the most difficult questions and the most difficult actions that need to be taken.”

Finally, Samuels hopes to take an active role in teacher contract negotiations. Though he he’s not mad at the teacher’s union, which does a “great job of taking care of its people,” Samuels said there needs to be a “kid union” that is currently absent. “Me? I believe I am the kid union,” he said. “The school board is the children’s union, it is the parent’s union, it is the community’s union. There’s absolutely no other way to look at it.”