Two weeks ago, readers may remember I wrote about sketching in cemeteries.

The day after I wrote that post I got out from behind my computer, packed my sketching supplies and put my bike on the #54 bus and traveled to Minneapolis from the Union Depot in Saint Paul to Minneapolis to sketch at the Memorial Day observance at Fort Snelling National Cemetery. I wanted to observe something traditional and record it in my journal.

I had never been to Fort Snelling Cemetery. It’s a little complicated to travel by bike to the cemetery and I did not see any bike parking facilities when I arrived. There were a lot of cars lined up to get in. I decided it would be smart to get a seat up front at the ceremony before the multitude of cars parked and disgorged their passengers. I sat in the second row in front of a band playing patriotic music. The band was really good, but they were dressed in black – not a good choice for being out in the blazing sun and temperatures in the 90′s, but artists must suffer and sacrifice for their art. I was wearing shorts and a Hawaiian shirt, so I was suffering and sacrificing for my art, but not as much as the musicians. But, I reminded myself that my suffering and sacrifice was nothing compared to the suffering of sacrifice of the veterans around me in all those wars and over the next couple of hours I listened to speeches reminding us about what soldiers endured in those conflicts and sketched in my small Strathmore bound, toned paper journal , Noodler pen and Prismacolor pencils (available at Wet Paint in Saint Paul). 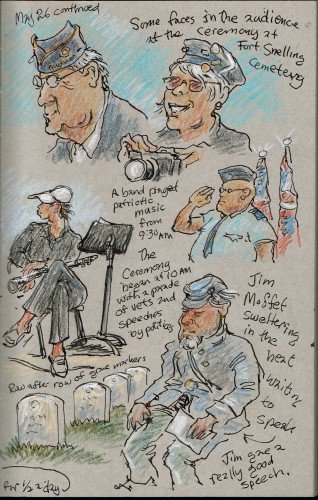 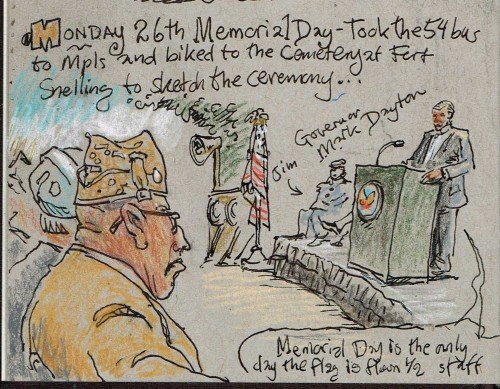 I’m a big fan of history so I enjoyed the speeches, especially a speech by Jim Moffet, a Civil War reenactor with the 1st Minnesota Regiment. 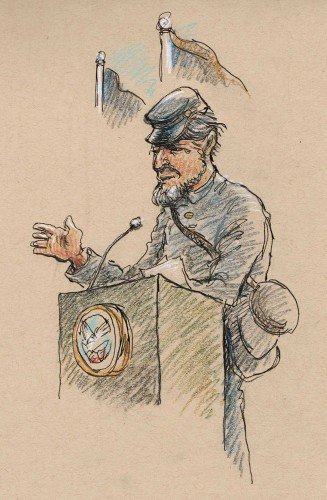 My drawing of Governor Mark Dayton doesn’t look much like him, but it was way too far away and getting way too hot to achieve a likeness at that point despite using my Brunton monocular – an essential tool for sketching at a distance.

After the ceremony, I sketched Civil War reenactors and some World War II reenactors in a jeep. 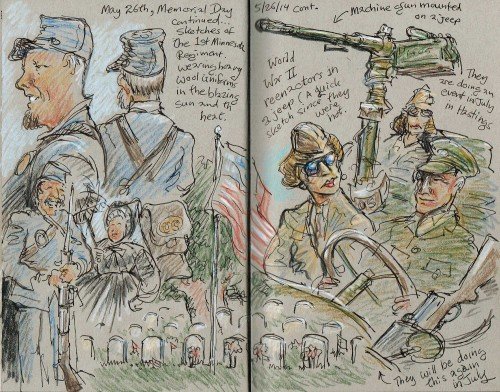 I had to sketch fast since they were off to lunch. They told me they would be at the Korean War Memorial Day observance on the Capitol Mall in Saint Paul in an hour or so. I biked there (it was too nice a day to bus/bike it). I arrived too late for the Korean War ceremony, so I walked to the Vietnam War memorial a short distance away and waited for that ceremony to begin.

There were a great deal of veterans of the Army of the Republic of Viet Nam (ARVN) there with their families who served free spring rolls to everyone. They displayed several yellow flags of the Republic of South Vietnam, bright yellow with three red stripes. I sketched a group of proud ARVN veterans looking in various uniforms with red and green berets. They were at the head of the color guard when the ceremony began. 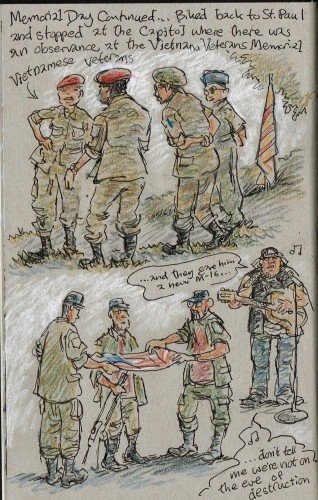 The passage of time, the generational difference and the controversial nature of the Vietnam War distinguished this ceremony from the ceremony back in MInneapolis which was mostly about Wars in which the United States was the victor. The World War II vets I sketched in Minneapolis in their VFW hats and medals contrasted with the Vietnam Vets I sketched wearing their biker colors. 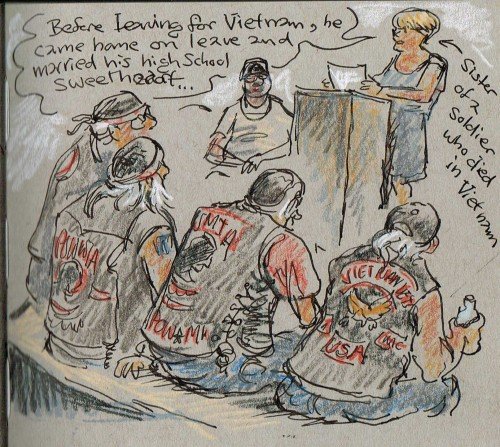 There seemed to be a really big difference between the two events I observed and sketched – the big ceremony in Minneapolis with the band, the politicos and the reenactors and the quiet, little homespun observance at the Vietnam Memorial in Saint Paul with the folk singer, the ARVN vets and the bikers. Both were heartfelt and moving, but a reminder to me of how different the Minneapolis and Saint Paul can be doing the same thing on the same day.