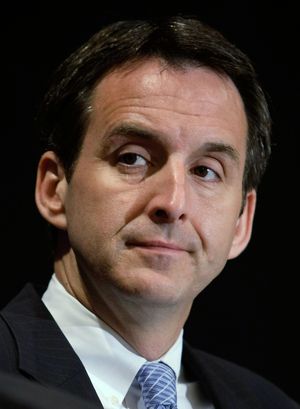 Over at True North, Bluestem reads in Environmental Agenda 21 Program gets 86’d in Crystal:

This is another wake-up call for us to pay attention. Many in leadership were sold on a shiny feel-good flyer without reading the small print in the Green Step Program. If the program has not yet been adopted in your city, forward the info to your city representatives. If it has been adopted, fight on any future ordinances (like the transit requirement shown above) that might be adopted.

In the meantime, here’s a toast to one city who 86’d this Agenda 21 initiative.

So where did GreenStep Cities come from, anyway?

The New Napoleon Solo: Tim Pawlenty as the Man from U.N.C.L.E.*?

This time it’s even more devious than those dirty hippies at the Environmental Quality Board inviting farmers, small business people, chambers of commerce and the entire state to Citizens Forums.  Messinger’s minion this time was none other than Governor Tim Pawlenty.

According to the Minnesota Pollution Control Agency’s “History and Development” page for the GreenStep Cities Program:

During fall 2007, Minnesota’s Clean Energy Resource Teams (CERTs) held regional listening sessions around the state to discuss community-based energy opportunities and the state’s Next Generation Energy Act of 2007. The idea was raised of creating a sustainable cities program, free to cities, that would challenge, assist and recognize cities that were “green stars.” This idea was taken up by the 2008 Legislature, which directed the MPCA, the Division of Energy Resources at the Minnesota Department of Commerce, and CERTs to recommend actions cities could take on a voluntary basis.

That is so sneaky of United Nations undercover operative and secret Alida Messinger minion Tim Pawlenty to engage people from across the state, then releasing their findings in a February 2009 report, when the Dayton administration was nothing more than a glint in Mesabi the German Shepherd’s eye.

In reality, the GreenStep Cities was vetted not only by the Pawlenty administration working with representatives from area non-profits and business groups, but by the state legislature as well. While the DFL controlled both houses of at the time, the enabling legislation passed with overwhelming, bipartisan majorities in roll call votes.

Conservatives might find the lop-sided votes on the bill that expanded the “green cities” program even more frightening than the role of the Pawlenty Administration, or at least conducive to cognitive dissonance.  According to the history of the enabling legislation–which was heard by committees and taken up on the floor of both chambers–the language passed 120-10 in the Minnesota House and 55-11 in the Minnesota Senate.

Who are the Republicans who are still sitting in the House and Senate who voted for the “Green Star” program in the 85th session of the Minnesota Legislature in 2008? Who still remains who voted “No”? Remember: there’s been a large turnover in both houses.

Voted “Yes” in the House; Elected to the Senate 2012: Bruce Anderson,Torrey Westrom

Who knew such conservatives as Michelle Fischbach, Bruce Anderson, Torrey Westrom and Sondra Erickson were dupes of the United Nations’ plan to steal American sovereignty?

Probably no one, because GreenStep Cities and sustainable development simply isn’t a secret plan for the United Nations to take over.  Instead, both are openly discussed, debated, and developed by citizens and elected officials.

Nor does it appear that  any serious attempt to repeal the legislation was made while the Republicans held the majorities in both chambers.

MN Anti-Agenda 21 Field Guide: is that a tinfoil hat in your pocket or are you just glad to see me?

So why have conservative activists suddenly discovered “Agenda 21” as a shrieking point? As we’ve pointed out before, the New York Times reported in Clout Diminished, Tea Party Turns to Narrower Issues:

Grass-roots leaders said this month that after losing any chance of repealing the national health care law, they would press states to “nullify” or ignore it. They also plan to focus on a two-decade-old United Nations resolution that they call a plot against property rights. . .

. . .But unlike the broader, galvanizing issues of health care and the size of the federal government that ignited the Tea Party, the new topics seem likely to bolster critics who portray the movement as a distraction to the Republican Party.

So what’s the gain in the new-found focus?

Part of the answer has to lie with discovering, organizing and training the Republican base, which was outnumbered and outhustled big time in Minnesota. Bluestem believes that with the state legislature and constitutional offices in the hands of the DFL, as well as both U.S. Senate seats (and five of the eight congressional districts),  actions like those in Crystal and other lower-level municipal, township and county governments can help Minnesota’s GOP discover some fresh blood while providing victories for the grassroots in training.

Minnesota’s conservatives need some victories, and shattered but regrouping  movements can find new life in the small ones.  Think of it as training exercises for 2014.

Second, anti-Agenda 21 conspiracies rachet up the fear factor on a couple of classic property rights and climate change denier narratives, and the groups pushing these stories are on the ground in Minnesota. Back in late June, Treehugger’s Lloyd Alter worked on Exposing the Influence Behind the Anti-Agenda 21 Anti-Sustainability Agenda.

So who is driving this bandwagon? John Laumer wrote John Birch Society Is Back: Municipal Planning & Environmentalism Targeted. Fred Koch, founder of Koch industries, was a founding member. He was also the father of the Koch Brothers who founded Americans for Prosperity. One of the JBS’s favorite experts on the threat of Agenda 21 is Tom DeWeese.

In Minnesota, Birchers are frequent speakers at the SW Metro Area Tea Party Patriots and JBS activist Rolland Neve was one of two Tea Party leaders to testify at the March 14th committee hearing on state senator Brown’s bill, S.F. 2117, for a  legislative commission to study Agenda 21. (The other person to testify was Southern Minnesota Tea Party leader Andy Johnson, Sr.)

When he is not out on the public speaking circuit, Tom DeWeese is President of the American Policy Center, the loudest mouthpiece of the anti-Agenda 21 crowd. He claims that the anti-sustainability movement is not just crazy people: “The tin foil is falling off of our hats rapidly as the fight against Agenda 21 is quickly escalating into the main stream of the political debate.”

He has a well-connected board of directors and advisors that includes:

Bonner Cohen, who, according to Sourcewatch, ran EPA watch, which was funded by Philip Morris and accused the EPA of “everything from destroying the US economy to trying to stop people from taking showers.” He was the sole director of The Advancement of Sound Science Coalition with his partner Steve Milloy of Junk Science fame. TASSC was funded by Amoco, Chevron, Dow Chemical, Exxon, General Motors and many more.

He is a senior policy analyst with the Committee for a Constructive Tomorrow, which gets most of its money from the Carthage Foundation and Sarah Scaife Foundation. Oh, and ExxonMobil, to the tune of $ 577,000 between 2000 and 2007 according to ExxonSecrets.

John Meredith is a director as well; he is a Washington lobbyist (and the son of civil rights icon James Meredith) and is on the Advisory Board of CFACT. . . .

The Board of Advisors includes Alan Caruba, who is a major contributor of articles to CFACT, which, by the way, was a gold sponsor of the Heartland Conference on Climate Change, infamous for its Unabomber ads (along with Americans for Prosperity) . ..

APC are the folks who helped organize the Freedom21 conferences where Michele Bachmann and Allen Quist have been prominent speakers.

EdWatch–founded by Renae Doyle and Julie Quist, who would later become Bachmann congressional staffers–was among the organizers of the Freedom 21 annual conferences.  And the guides to blocking the “Delphi Technique” touted by EdWatch?  APC Board of Advisors member Beverly Eakman was a frequently cited source and spoke at EdWatch’s  Oct. 14, 2000 and May 21, 2004 banquets, according to Eakman’s Wikipedia page.

Other APC favs, like anti-immigrant activist Sheriff Richard Mack, chummed around with DeWeese and Eakman at the 2010 Freedom Action Conference. Poor Sheriff Mack was the keynote speaker for the 2009 Tea Party Against Amnesty but ended up being upstaged by Robert Erickson.

Another player in Agenda 21 conspiracy games with a Minnesota tie? Alter reports that Americans for Prosperity is involved:

As Far as the Koch’s Americans For Prosperity goes, they hand out brochures about Agenda 21 that are almost fair and balanced compared to some of the stuff I have read.

Some conservatives worry that sustainable development is just a disguise for a larger scheme to adopt radical environmentalism, wealth redistribution, or some form of “world government” through local initiatives. But whether this is true is largely irrelevant: regardless of the underlying motives and regardless of the source, the policies themselves prove to be an affront to property rights and harmful to the American economy. To those who favor economic freedom and limited government, this alone is grounds for concern.

AFP branches from Kansas to Oregon appear to have Tom Deweese constantly on the rubber chicken circuit, he is everywhere.

AFP has established a Minnesota office. MPR reported in Wealthy outside political groups find a home in Minnesota:

. . .Americans for Prosperity is quietly establishing a long-term presence in the state. The group opened a Minnesota office last year, and has hosted tax day rallies, conducted a poll on the Minnesota Vikings stadium debate and backed candidates for the state Legislature.

Dropping hundreds of thousands on ads may affect an election, but they do little to shift public sentiment beyond November, said John Cooney, who leads Americans for Prosperity’s Minnesota branch. . . .

“We’re aggressively discussing policy, but we want to create the infrastructure so that we’ve got an active grassroots organization engaged not just on federal issues, but with state policy makers and local policy makers,” Cooney said.

. . .What’s been happening in Minnesota reflects Americans for Prosperity’s broader strategy of focusing on local issues through its 34 state chapters and counting on incremental change, spokesman Levi Russell said. Small victories can add up to produce a long-term effect on how people think about the economy.

“We want [voters] to have an ongoing awareness for free-market issues so that they can make daily decisions that impact that and not wait until it is election time,” Russell said.

Alter identifies Freedom Advocates as an another anti-Agenda 21 organization (Minnesota-related articles on its website) and the The Committee for a Constructive Tomorrow, (CFACT) as players as well. There’s an active chapter of CFACT’s Collegians for a Constructive Tomorrow at the University of Minnesota.National Director Bill Gilles lives in St. Paul.  In March, the UMN chapter of CFACT hosted climate change denier Sir Christopher Monckton.

Bluestem will continue to monitor anti-sustainability politics in 2013.

*Yes, Bluestem is  aware that in the public iteration of “The Man From U.N.C.L.E,”  UN didn’t stand for United Nations; however, the original concept for the show did operate under that conceit.