October is always a scary month for stocks.  The profits from summer months spent lounging at the beach are never all that great and the cold winds of autumn remind everyone that the carefree daze are gone.  As the numbers roll in at the start of October there is a natural tipping point in the stock market – the time when, if it’s gonna go down it will.

This year there is an intensity around the numbers that is probably an even bigger predictor of failure.  When greed is beating fear no one really cares about something as techno as data.  When everyone feels good, why not throw a party?  Numbers, themselves, are cold and hard and always ready to disappoint.  This October is setting itself up for a bad time ahead.

But it’s good that everyone is finally watching.

Estimates for job creation in September are coming in a bit higher than what we can expect for the final report, due on Friday.  ADP estimates 91k jobs were added but most economists figure it’s more in the 45k-60k range.  Watching the Initial Claims report week by week suggested it will be more in the 40k-50k range, given that we were right at 420k (4 wk moving average) through the whole month – and zero job growth seems to be at 430k.  Data from our friends at the St Louis Fed: 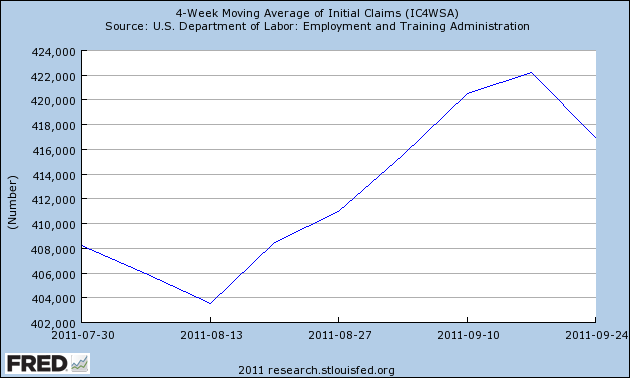 We’ll see if I am right on Friday, but that’s not really the point.  The intense scrutiny of jobs reports is almost certainly going to be something of a letdown because any of these numbers is just not what we need right now with an 8 million plus job deficit.

What matters far more than the data right now is the psychology.  Being this compulsive about numbers is not a good sign in that department.

It is worth noting that if zero net job growth is 430k initial claims, that means that somewhere else in the economy every week 430k new jobs are being created. Taking a bigger look, we can see that in something like a recovery we have initial claims more on the order of 300k each week: 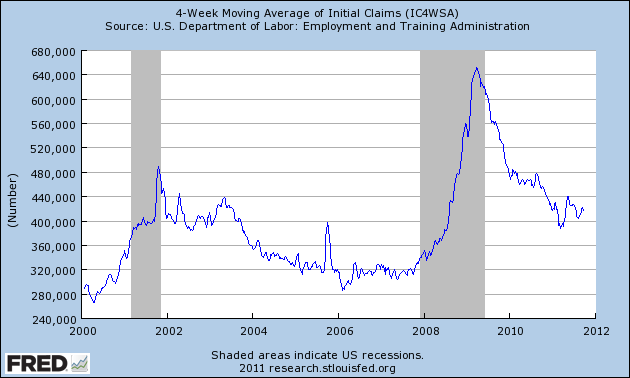 At that rate, we’d create 500k jobs every month and inside of 2 years we’d have full employment.

The problem is not job creation – the problem is that the economy is turning over, creating and simultaneously losing jobs, especially at larger companies like Bank of America.  This is more evidence demonstrating that what is happening right now is not a permanent downslide but a transformation of our economy.  Getting through this period as quickly as possible is what matters most.

More importantly, there are places that are hiring and growing.  There are good investments out there for the nearly $2 trillion that the Fed has tried to pump into banks and other financial institutions.  It’s a matter of finding them – which is to say that they are probably smaller opportunities that have not made the radar of big institutions.  That is confirmed by the ADP report that came out today.  Growth is at the small end of the economy, as it usually is.

What can we make of all the data as the days become shorter and colder?  There are reasons to believe that Wall Street will panic at some point in this month because the line of really bad news, from job reports to profits to the Eurozone, is long and treacherous.  It’s a spooky month for everyone.  But that does not mean that something isn’t happening in the economy.

It has generally been said that Wall Street is a leading economic indicator, looking out a few years in the future.  That’s pure BS as far as I can tell.  Right now, Wall Street is at least a month behind – probably more like six months.  This is what happens when fear beats greed.  It’s up to the rest of the economy to keep doing what it does and hope that the leadership helps move the transformation along.