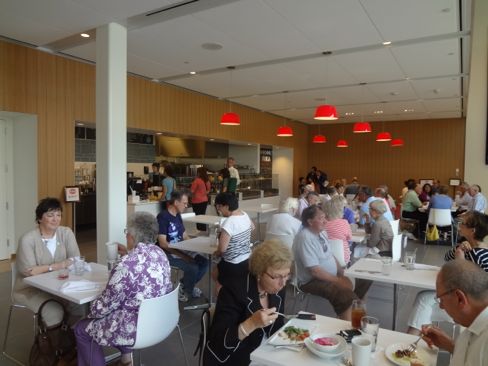 I have been immersing myself in Scandinavian culture recently – or more specifically Danish TV shows – first the crime series Forbrydelsen, which was remade by AMC as The Killing, and more recently the political drama Borgen, which has been described as the Danish West Wing.  It’s the best television I have seen in years, but then again, I don’t watch much TV. (Link TV is having a cable and online marathon of the first two seasons of Borgen, this week and next – don’t miss it. )

At any rate, all of this has put me in the mood for some Scandinavian cuisine, even though the only food I remember anybody eating on either show is Chinese takeout and a French croissant. We don’t have any Danish restaurants in the Twin Cities, but we do have the Nordic-inspired Bachelor Farmer in the warehouse district, the new Fika cafe at the American Swedish Institute, and a hidden gem, the Cafe Finspang at the Midtown Global Market. Not to mention the cafe at Ikea, whose Scandinavian repertoire seems to be limited to Swedish meatballs and mashed potatoes. 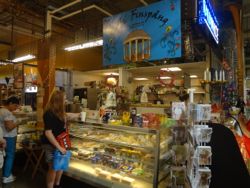 I have never actually dined at the Bachelor Farmer — just had an appetizer at the bar, shortly after it opened. I was going to wait until the fuss died down, and return for a special occasion, but then I found out that a bowl of split pea soup with ham and cabbage would cost me $20, so I decided it would have to be a very special occasion.

Yesterday afternoon, I decided that writing this column might be that special occasion, so I went online to make a reservation, and discovered that the soonest I could get a reservation was on Wednesday, past my deadline. In fact, the Bachelor Farmer is so popular these days that on most nights, the earliest you can reserve a table is 9 p.m., although they do set aside some tables for walk-ins.

This is no doubt due to the recent story in the New York Times, A Return to Nordic Roots,  which sang the praises of The Bachelor Farmer, while mentioning Fika and several other local restaurants in passing.

So far, Bachelor Farmer seems to be a lot more successful than the last effort to implant upscale Scandinavian cuisine, Aquavit, which opened in 1999, struggled for four years, and then closed in 2003, in spite of the presence of celebrity chef Marcus Samuelsson.

There seems to be a widely shared notion — perhaps inspired by memories of the Jolly Troll smorgasbords — that traditional Scandinavian cuisine is plain and bland and boring — stuff like lutefisk and herring and Swedish meatballs, and is in need of a new generation of creative chefs to reinvent it. 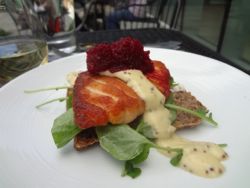 I’m sure chef Paul Berglund at the Bachelor Farmer, and Rene Redzepi at Noma in Copenhagen, are doing wonderful work, but as a matter of fact, there is at least one strand of Scandinavian culinary tradition that is simple yet sophisticated, and in no need of reinvention: the open-faced sandwich, known in Danish as smorrebrod, in Swedish as smorgas, and in Norwegian as smorbrod.

It might be a bit of a stretch to call smorgas Scandinavian sushi, but they do have this much in common: both are bite-sized bits of culinary artistry whose presentation is an art form in its own right. Smorgas are often served on rye rather than rice, but some of the other frequently used ingredients are similar: uncooked fish, especially salmon or herring; salmon caviar and shrimp.

I have found delightful examples of smorgas recently at both Fika and Cafe Finspang. I stopped by for lunch at Fika last Sunday, and found it absolutely charming — an open dining space with the clean lines and simplicity of Scandinavian design in the atrium of ASI’s new Nelson Cultural Center wing, with a few outdoor tables in the adjacent courtyard. You order at the counter, take a number, and the food is delivered to your table. 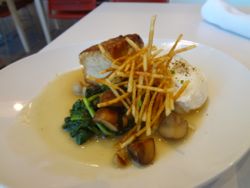 The menu is very limited: a soup of the day, three smorgas — roast beef, shrimp and salmon (all $7.50), a few salads ($5.50), and a few small hot plates, such as meatballs with pureed potatoes and lingonberries ($7.50) or smoked pork belly with mushrooms, spinach and poached egg ($7.50). We shared the shrimp smorgas, topped with poached shrimp and fresh cucumber in a dill aioli, and the salmon sandwich, garnished with watercress, beets and mustard, both very fresh and lively and flavorful.

A variety of pastries and desserts are available, including coconut almond cookies, chocolate-flavored arrak balls (traditionally flavored with Arrak liqueur, but I am not sure about these), a rich cardamom bread pudding and more. Wine and beer are available, as are specialty coffees. 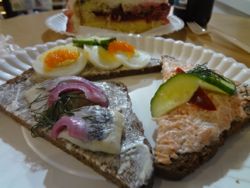 I also stopped by the Midtown Global Market for a quick lunch at Cafe Finspang, and selected smorgas of herring, salmon spread and hardboiled egg topped with salmon roe ($1.75 apiece) – smaller and simpler, but also quite tasty. The highlight of my visit to Finnspan, though, was the dessert. A variety of cookies and bars are available, along with lefse (potato flatbread) rolled with sugar and butter, but I opted for the last slice of the fresh berry cake, an enormous wedge of cake slathered with whipped cream and dotted with blueberries and strawberries, with a fruity raspberry filling sandwiched between layers. At $3.50, it was a steal, although the server behind the counter assured that the portions aren’t usually quite this enormous, but it was the last slice, and not quite big enough to cut in half and sell as two servings. 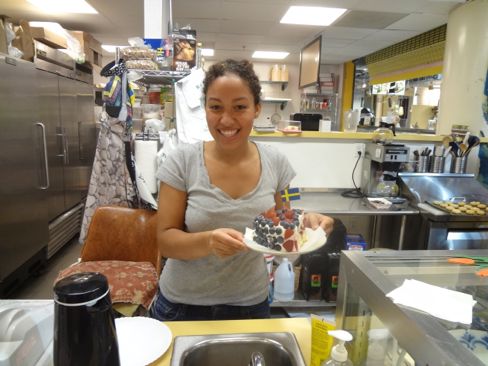