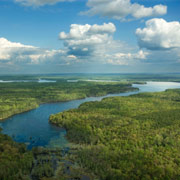 The last remaining Minnesotan standing in the presidential primary race has some very strong views on energy policy, and the issue area has not been spared from her propensity for brief, extreme statements.

It was clear that Congresswoman Bachmann had divergent views from the clean energy crowd when she stated that America’s energy problem is the easiest one to solve. How, you ask? By domestically extracting the (un)Holy Trinity: oil, natural gas, and coal. After that, she went on to promise $2 gas under a Bachmann administration, which we think is a bad idea, and one that would require enormous government subsidy—even with expansive and invasive domestic drilling.

The latest energy statement from Bachmann, serving as the inspiration for this blog, is that we should drill in the Everglades. The Congresswoman made this statement in Florida, of all places, assuring the crowd that we should only drill there if we can do so responsibly.

According to the AP, she stated that she would rely on experts to determine the responsibility of drilling in the Everglades, though which experts she would rely on after abolishing the EPA is still unclear. She concluded her remarks on the Everglades by saying that “We don’t want to harm our water, our ecosystems or the air. That is a minimum bar.”

Contradictions and confusions in these statements aside, the Congresswoman is using almost the same reasoning that the clean, renewable energy movement is using. The reasoning behind domestic energy of any kind is to reduce our dependence on foreign energy and improve our energy security. Then, the two paths diverge in a yellow wood, to borrow from Robert Frost. Except in this case, one path is in a wood and the other has been strip mined for all of its resources.

Saying that we should drill, hydrofrack, and mine more oil, natural gas, and coal is an easy thing to do. As Grist’s David Roberts points out, it’s easy because it means that we don’t have to change any of our ways, from our infrastructure to our mindsets.

In the end, however, these types of energy extraction are inevitably harmful to the environment and public health, and more expensive in the long-term. That’s not even to mention the emissions caused by processing and using the fuels post-extraction.

Here’s something that would actually be bold: supporting clean and renewable energy that, despite its upfront costs, would give us long-term, domestic, and secure energy without requiring the sacrifice of our natural places.