I spent a week this summer helping Bryan Thao Worra become a former Hawthornite.  He moved out to the LA area, and we drove across country in a moving van, sampling ghost peppers along the way.  Once we hit the ocean, we bombed around Los Angeles, San Diego, and whatever other cities there are along the sprawling coastal metropolis area.  In San Diego, I came across this sign and snapped a photo to remind me to go back and research what they were doing to save a potential historic site from demolition.  What could Minneapolis learn from other areas?

It almost seemed I was destined to look into this more.  “Fat City” is a nightclub located along the historic Pacific Highway, with Hawthorn Street as the nearest intersection.  Like Fuji-Ya here in Minneapolis, Fat City was the beneficiary of a pioneering Asian-American businessperson, Tom Fat. 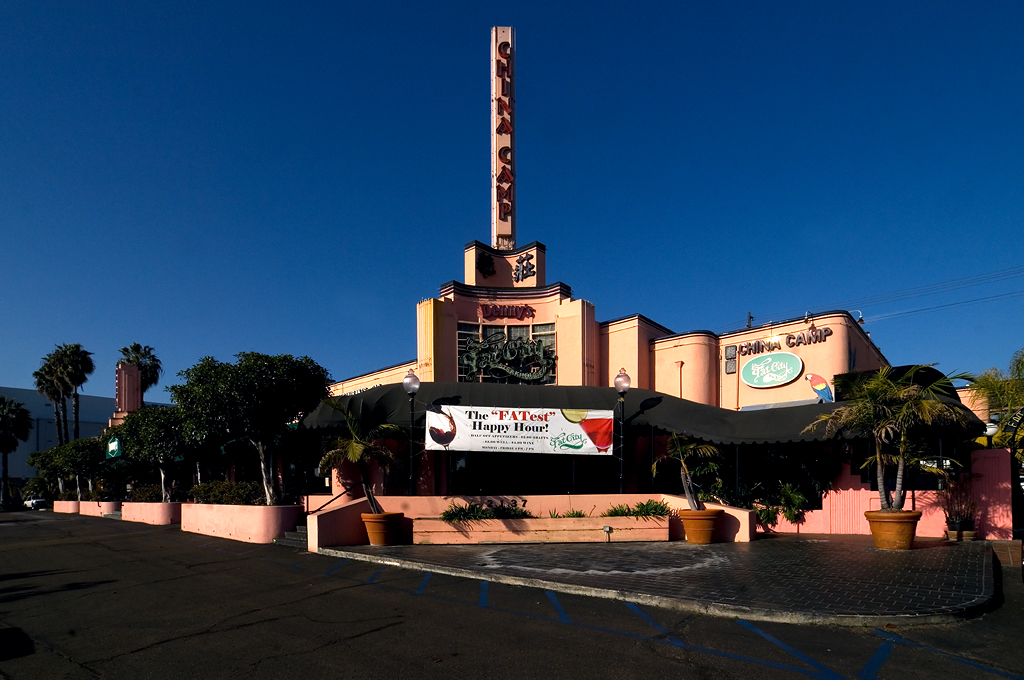 The nightclub was originally called Top’s Nightclub, and was owned by a Russian immigrant, Yale Khan.  Top’s became a central point for the San Diego nightlife, drawing star performers such as Nat King Cole, Shelley Winters, Nelson Eddy, Van Johnson, Don Ameche, Susan Hayward, Dan Rowan and Dick Martin.  In 1977, Tom Fat took over the property, restoring and improving the site.  The crown jewel of his addition was… 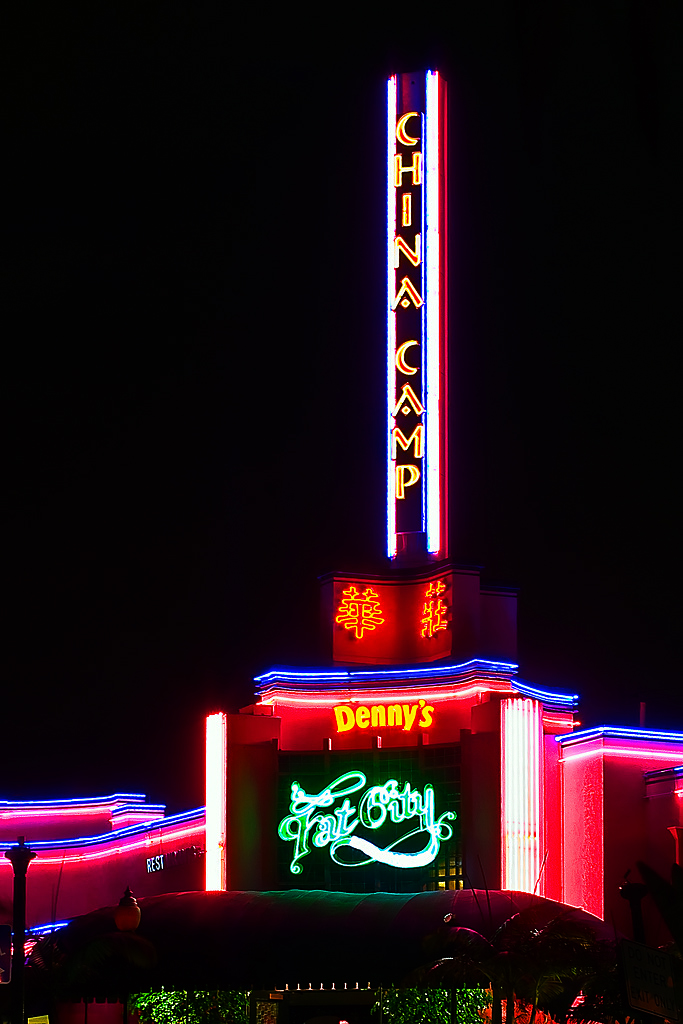 More than one mile of neon was added to the building.  And this addition is what I first found utterly fascinating.  I never thought of the juxtaposition of neon and historic in the same sentence before – except when I watched the movie Tron decades after its release.  The structure is also one of the last examples of the art deco building style in the area.  The prospect of a building style from the 1940’s and neon–neon!–as historic grabbed my attention and I followed the story even after returning to NoMi.

I’ve asked this question before, but it bears repeating:  In the long view, what will become historic if we let buildings stand?  Will we come to better recognize the contributions of women and minorities?  Will certain building styles or features become historic, given enough time?  Will an architect who designed a cutting-edge structure here rise to prominence locally or elsewhere?  In short, how much potential history do we lose through demolition?

Tom Fat was also a renowned philanthropist, and his building, his legacy, was in danger of being torn down and replaced by this: 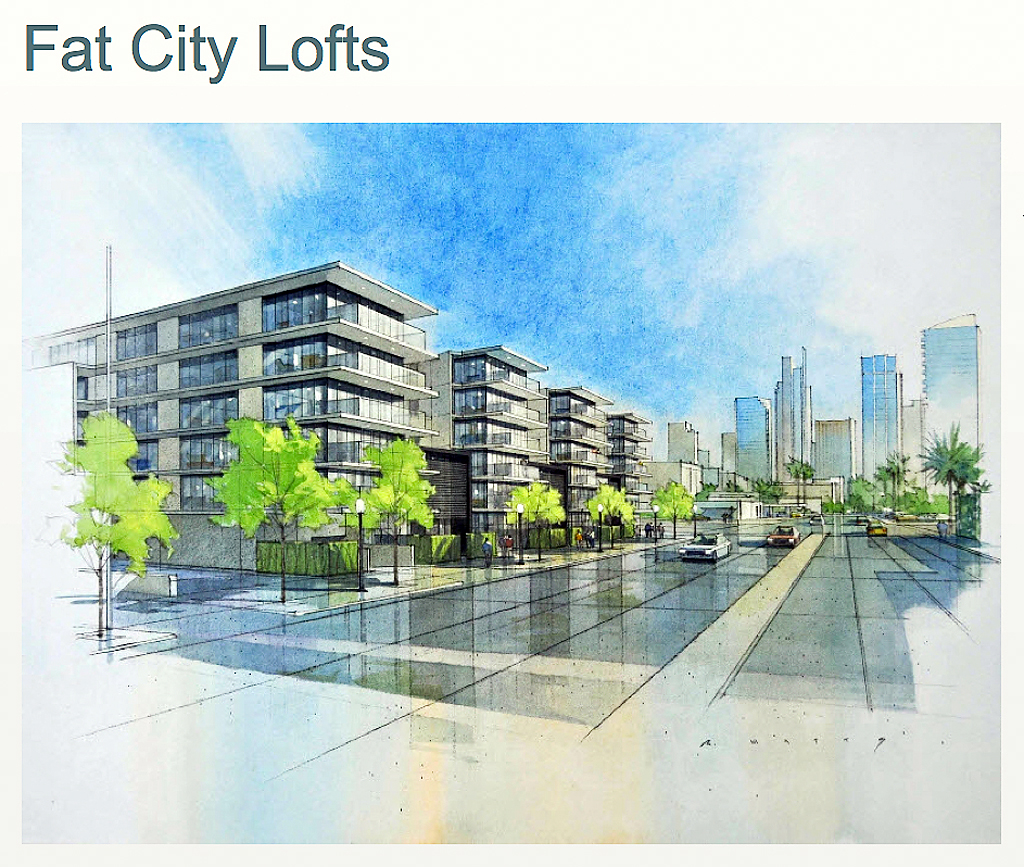 For anyone who hasn’t traveled to the west coast, that is an artist’s rendering of every single high-density condominium project in southern California.

In response, a grassroots effort started up to get Fat City historically designated so that the condos couldn’t go up.  Countering THAT, another site sprang up called “Save Fat City Lofts.”  That website is not transparent at all about who runs it, and seems to be authored by those who would directly benefit from the proposed development.  In the end, a compromise of sorts was reached.  The parts of Fat City that had still retained their historic value would be preserved and moved, and the lofts would be built around the structure.  Upon completion of the project, the preservation group would seek historic designation at that time.

In my readings of the Facebook page and various blogs, two procedural tactics jumped out at me regarding how we could do things here in Minneapolis.  First, at public hearings regarding preservation/historic designation, attendees could opt to speak or simply fill out cards marked “support” or “oppose.”  Variations of this strategy get used on occasion to gauge the prevailing opinion of those who are at a meeting, but this seemed like a pretty standard way to go about doing so in San Diego.  It might be worth looking into here in Minneapolis.

More interesting, however, was a letter of support that appeared on the Fat City Facebook page.  I can’t seem to find that letter now, but will link to it if I track it down.  In proposing historic designation, the author claimed that would bring about the benefits of easier code compliance that come with historic properties.  Without the exact wording, I’m left to speculate:  how exactly would historic designation make things easier?

At least some people in north Minneapolis have the opinion that historic designation is to some degree undesirable because of the extra rules and requirements that go with the territory.  So what could rules and regulations for designation look like if they were to have the opposite effect?

With the historic rehab tax credit, Minnesota is accomplishing this already in one respect.  For other possibilities, let’s bring the discussion full circle and back to a house that was mentioned in the first of my policy wonk posts, and I’m told, has been flagged as potentially historic:  The Sheltering Arms House.  This is a property in an area that the city in its infinite wisdom changed to a blanket R2-B zoning.  However, it is a fourplex and has been a four-unit property either since its inception or for the significant majority of its lifetime.

When the city first purchased this property with the intent to demolish the structure and place the land in a land bank, they brought up the fact that we have a four-unit building in an area zoned for only two units.  And since the house had sat vacant for long enough, it lost its variance and reverted back to having the ability to operate only as a 2-unit structure.  Instead of either seeking to restore the variance or opting to rehab the building into the conforming two units, Minneapolis would have solved this problem with a bulldozer.

“This building isn’t properly zoned, so let’s tear it down,” was essentially their position.

Instead of trying to argue the intellectual failings of such a stance, I’d prefer that we simply remove that problem entirely.  If a property is designated as historic, then the conditions for its use should revert back to the built form of the structure during the relevant period of its historic nature.  For instance, the Sheltering Arms house operated as a four-unit orphanage, run by a panel of 25 nuns who were dedicated to serving children without regard to race, color, or creed.  In 1888.  That would be the pertinent historic aspect of that house, and with designation, it would in theory regain its ability to operate in the historically relevant manner.

(Not that it would be an orphanage again, but that the structure functioned as a four-unit building.)

Furthermore, why not look at ways to extend this philosophy to buildings citywide?  Whatever the reason for removing a zoning variance or conditional use permit after a long enough vacant period, these rules no longer serve communities rebounding from a housing crisis.  Urban Homeworks has rehabbed one structure and is set to begin another two multi-unit buildings.  All three such buildings are in or on the border of Hawthorne, and all three lost their variance to operate as multi-unit structures.  None of them were feasible to convert to the conforming 2-unit buildings that zoning required.  Urban Homeworks’ rehab of these apartments is therefore delayed by at least a month and perhaps significantly more while they jump through hoops that everyone expects they will successfully navigate.

When we are in the midst of wondering where tornado victims will spend the winter, what purpose does a delay like this serve?

And Urban Homeworks is one of the luckier ones.  Try going through this process on your own, without the benefit of being an esteemed non-profit.  One of the Urban Homeworks’ buildings was owned by a private individual who elected to sell to them instead of attempting the rezoning himself.  Changing our ordinances in this area could increase the private investment in our communities at a time when it’s most sorely needed.  Our city needs to look into ways that all housing – both historically designated and not – can be put into appropriate use quickly and in ways that inspire private development.

(Top photo by the Jeff Skrenes. Other photos/images from www.dsoderblog.com, used with permission.)