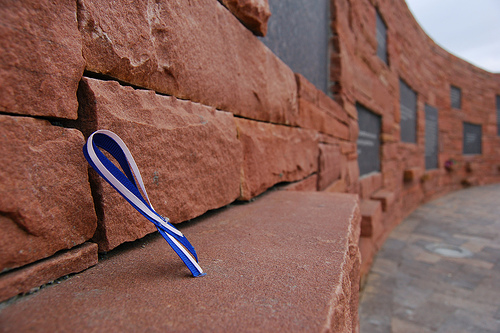 I was saddened by the Sandy Hook killings. At one point on Friday morning, I posted to my Facebook wall that I was both “shocked and saddened.” But the sad truth is that I wasn’t shocked by what happened on Friday. We’ve had too many school shootings for me to be shocked anymore.

I was truly shocked once though.

I was a high school sophomore on that ugly day in 1999. I heard the news while high up in the air on my school’s ropes course. We were only a few miles from Columbine, and friends from my youth group attended school there. I remember the helicopters flying overhead as I watched the local news reports in my living room that afternoon. I got caught up in the communal grief we all felt. Looking back, I know that much of my grief was a disproportionate response caused by my own 16 year old turmoil and by the propensity of teenagers to become overly drawn in to anything dramatic. But back then? It felt about as sad as anything ever could be.

Having been there before, my emotions did not get the best of me this past Friday. I did not begin sobbing. I refrained from getting sucked into watching the news outlets report the latest “facts” (often incorrectly) as they looped images from the scene. But when people started — rather quickly — shouting on their Facebook walls that stricter gun control was THE answer to stopping this horrible phenomenon of mass shootings, I grew angry.

I searched for the right words to say “Wake up! This problem is so much bigger than gun control.”

I couldn’t find them and I felt that my own, somewhat removed, experience with this type of tragedy wasn’t enough to give my argument weight. So when my friend Joe posted the following, I cut and pasted his words to my own wall:

I’m sure we’ll shortly have the NRA raise the naïve and ridiculous idea that there should have been an armed teacher there.

And we’ll have the anti-gun folks raise the equally-naïve and equally-ridiculous idea that if we banned private firearms ownership, 300 million firearms would somehow magically evaporate and people who want to murder will suddenly be unable to find them.

50 years ago, equally effective firearms could be mail-ordered by anyone who mailed a check to Sears Roebuck. No paperwork or background check required, and your guns come right to your door. People didn’t shoot up grade schools and movie theaters even though it would arguably have been far easier then.

Why is no one asking the REAL question here, which is “how do we get our people to stop killing each other?”

The vitriolic and often pointless debate over the inanimate lumps of steel people often use to kill merely distracts from discussion of the real problem: people are killing people.

Joe is not just a friend, he’s an ex-boyfriend. There is still a part of me that loves him – differently now, of course. He is ridiculously smart, unbelievably talented at fixing things and remains one of the most interesting people I know. We met at CU Boulder’s Hillel my junior year. Several years past the tragedy by then, we never spent much time talking about that day in 1999 when he ran from the Columbine lunchroom as two of his classmates went on a killing spree before ending their own lives.

When I first posted his words to my wall, I didn’t mention that I was quoting a first-hand witness to the special type of horror that is a mass shooting at a school. It was only after I asked his permission to disclose his survivor status that I interjected that fact into the rather heated debate taking place in the comments of my post. The tenor of the conversation changed immediately. For better or for worse, Joe’s experience gave his words the weight needed to compel people to consider his question.

I spent a lot of time this past shabbat reflecting on the Sandy Hook tragedy and this ugly phenomenon of mass killings. I thought a great deal about Joe’s argument in the debate that took place on my wall:

Effective gun control is a start, but I truly believe that the fire and brimstone on both sides of the gun debate are nothing more than distractions from the real issue – that we as a society are somehow incapable of keeping some of our members from committing atrocities like this.

As Jews, we say “may their memories be a blessing.” It is easy to simply throw this phrase out and move on. But I think we can, and should, be compelled into changing this world for the better in their memory. And I think Joe is right — we must stay out of the dangerous territory of emotionally-charged black/white diatribes focusing solely on gun control so that we don’t lose sight of the much bigger issue that needs to be addressed.

A family friend asked today “it’s such a complex problem, where do we even start?”

I was surprised to find myself saying that we start by 1) acknowledging that this is not a simple problem with a single solution and 2) identifying where we can add our own particular talents and experience to do the most good – whether it be by improving mental health care, adding a rational and reasoned voice to the gun control conversation or by doing something to ensure that this culture of violence changes. I was surprised by my answer because I, too, have been struggling with the question asked and feeling overwhelmed.

I don’t yet know exactly what I will do to make their memories a blessing. I do know that I will keep Joe’s words close as I seek to figure out how my own talents and experience can be a part of what must be a multi-dimensional solution to the horrific problem we are tasked with solving.

Emily Cornell is fueled by coffee & big dreams. She spends her days building brands and her evenings writing. She’s proud to have been a part of TC Jewfolk from its inception and currently serves as a Jewfolk Media board member. A matchmaker at heart, she’s always connecting people to other people and ideas. Follow Emily on Twitter @TheMishkina or catch her on LinkedIn.