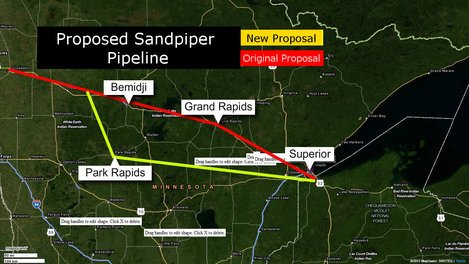 On the morning of September 29, North Dakota farmer Steven Jensen discovered a gurgling pool of oil in his wheat field. From a quarter-inch hole in the pipeline, 865,000 gallons of crude oil from the Bakken oil field leaked into his fields. It was 11 days before there was any public notification of the spill. In the last two years, North Dakota has had over 300 pipeline oil spills that were never publicly reported.

As the oil polluted soil is being removed from Steven Jensen’s wheat field, the Enbridge oil company is planning a new pipeline from North Dakota carrying crude oil across northern Minnesota. In Carlton county, local residents and farmers along the proposed pipeline route are concerned about the risks the new pipeline, called Sandpiper, poses to their lives, land and environment. Citizens in the region have come together under the name Carlton County Land Stewards. IATP met with some members to learn more about the pipeline plans. Like so many extreme energy development projects, the citizens most affected are often the last to know what is being planned. Fortunately, land owners and farmers in Carlton County are working together to protect their farms and community.

Enbridge’s PR has focused on the temporary jobs that will be created by the Sandpiper project. This generic rallying cry neglects to recognize the loss of land and livelihoods the pipeline will cause. The Sandpiper project’s preferred southern route runs directly through a number of farms in Carlton County. Carlton County has a burgeoning local foods movement with many new farmers continuing to increase production year after year, and some farmers looking to expand onto new land. The misguided pursuit of corporate profits over sustained local economic growth and stability at the expense of farmers’ livelihoods will only be detrimental to the already established agricultural economy in Carlton County.

Steve Schulstrom and his family run Spectrum Farm, established 12 years ago. Spectrum Farm prides itself on being a model of sustainable living, serving customers maple syrup, milk and organic hay. The pipeline’s route is expected to run through a field where Schulstrom grazes his cows and a large area of forest. A large swath of trees would have to be cut down affecting Schulstrom’s maple syrup production.

The Sandpiper pipeline project would suppress the growth of Janaki Fisher-Merritt’s Food Farm, an organic farm serving over 180 CSA customers.

Photo: Enbridge Oil is bringing a new pipeline from North Dakota to Minnesota posing a threat to farmers and land owners across the state.