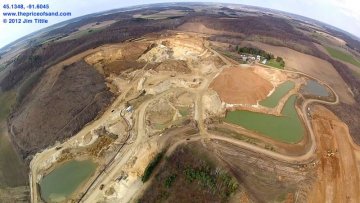 Jim Tittle of sandmine.info and The Price of Sand has released Lo and Behold, a new video drawn from testimony at a public hearing about the dozens of railcars carrying open beds of sand that have been idled or moved through the St. Anthony Park neighborhood.

Raised in the Regd Wing area, Tittle began to research frac sand mining when a Texas mining company bought a parcel near his parents’ home in Goodhue County’s Hay Creek Township. When sand cars started appearing in St. Anthony Park, where he keeps a small studio, he knew what he was looking at.

Open train cars filled with sand have raised alarm in St. Paul’s St. Anthony Park neighborhood, where some residents wonder if the silica that comprises 80 percent of the unprocessed sand is safe.

The cars, which often are parked in a rail yard sandwiched between homes and an industrial zone, are appearing on a more regular basis since an oil boom has increased the demand for the sand for its hydrofracking operations.

BNSF Railway Co., which transports the sand, and Minnesota Commercial Railway representatives said the trains are carrying wet “unprocessed raw sand” — not pure frac sand — and that it isn’t a health risk. The concern, however, is that nearly all information about silica’s health impact are derived from studies in the workplace, where it has been shown to cause cancer, and not of ambient exposure.

A meeting was held, and this video short is Tittle’s reaction:

Top photo: An aerial view of a frac sand mine, by Jim Tittle.