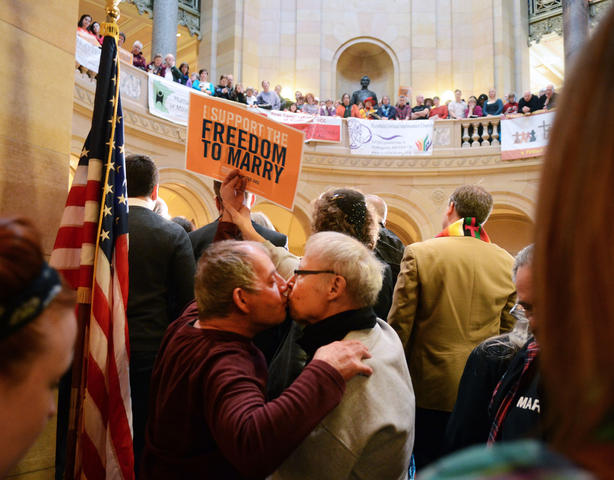 Clark McDonald and Walt Oberstar kiss while gay marriage supporters rally Thursday, Feb. 14, 2013, at the Capitol. McDonald and Oberstar have been together for 30 years and were married in 2008 in Toronto. (Photo by Bridget Bennett)

Lawmakers, clergy and students and more rallied Thursday to drum up support for the state’s forthcoming same-sex marriage legislation.

Hosted by Minnesotans United for All Families, the more-than-2,000 person Valentine’s Day rally marks the beginning of this year’s same-sex marriage conversation at the Capitol.

Political and religious leaders took to the podium to share their views as waves of supporters cheered on.

“I really hope this is the kick-off point for a discussion and ultimately leads to the passage of marriage-equality legislation,” said University political science freshman Gabe Aderhold.

Sen. Scott Dibble, DFL-Minneapolis, who is expected to author the bill, said he is frustrated that he and his spouse, Richard Leyva, are viewed as “legal strangers in Minnesota” because they were married in California years ago.

“I cannot think of anything more intrusive than the government telling people who they can marry and telling churches which marriages they can solemnize,” said Sen. John Marty, DFL-Roseville, prior to the event.

About a hundred clergy members of various faiths attended the rally and a handful of leaders testified as proponents of the bill.

“In the eyes of Judaism, marriage links us to the basis of our faith” like family and love, said Rabbi Melissa Simon of Shir Tikvah Congregation Thursday.

She said the language in the legislation would allow churches the option of solemnizing same-sex marriages, but they wouldn’t have to.

Audience members held signs and chanted in unison, “Now is the time, this is the year!”

The rally mirrored the energy of the fall when Minnesotans United organized events to defeat an amendment that would define marriage as one man and one woman.

“The amendments on the ballot this fall may have been the thing that built up this huge momentum for this,” Marty said.

Molly Tofayo, a spokeswoman for One Iowa – an organization that raises awareness for LGBT Iowans, similar to Minnesotans United – said she is hopeful for the state’s battle to legalize same-sex marriages.

“To have Minnesota stand up and say no, we don’t want this amendment, we don’t want discrimination written in our constitution and then to ride that wave of momentum, into what I hope will be a successful push in the Legislature,” Tofayo said.

Marty said Dibble’s bill will be formally introduced to a Senate committee in the next few weeks.

“I think there’s a really good chance that it’s going to pass this year, and if so, things will happen very quickly,” he said.