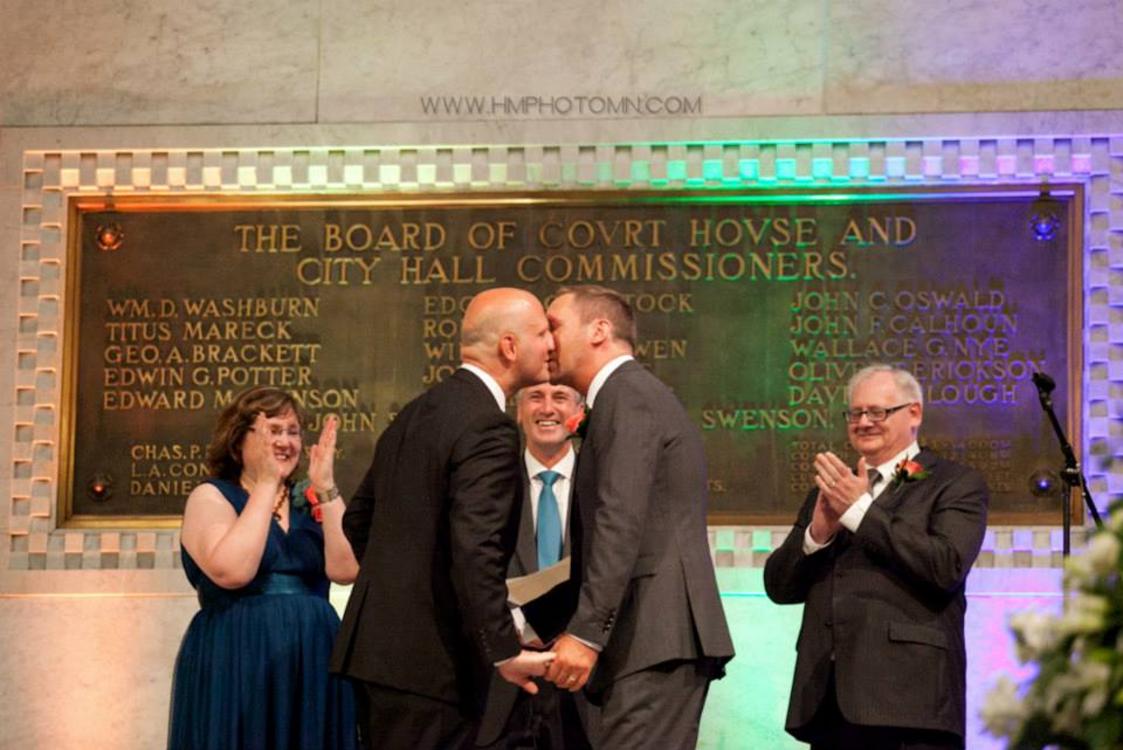 (Photo by Heidi Garrido) A couple kisses after being married by former Minneapolis Mayor R.T. Rybak at city hall on Aug. 1, 2013.

Since same-sex marriage became legal in Minnesota, Heidi Garrido has shot for more than a dozen same-sex weddings. The St. Paul photographer said she’s already seen a major increase in her profits since the state legalized same-sex marriage last summer.

And Garrido isn’t the only one that thinks the wedding industry is going to see a major uptick from the ruling. According to a study released by Nerd Wallet earlier this month, Minnesota could stand to gain $38 million dollars annually in the wedding industry from same-sex marriages. The study estimates around 1,300 same-sex marriages in the state per year, and bases its predictions off of the 2.9 percent of Minnesota’s population who identify as LGBTQ and the state’s average wedding cost of $28,265.

“This is not only a short-term development,” said the author of the study Sreekar Jasthi. “Many states where same-sex marriage is legal have seen an economic boost as couples plan their unions.”

Jasthi said same-sex marriages are still new and aren’t the norm yet, so many of the initial marriages were planned quickly and performed at a courthouse, but that could change as soon as it becomes more normal.

“When same-sex marriage has been legal for several years, our assumption is couples will be able to spend more time planning their weddings,” he said. “And they spend more money on the ceremony.”

But St. Paul couple Bre Schmidt and Hannah Christensen said even if they could spend a lot of money right now, they wouldn’t want to. “My fiancée’s parents are paying for the wedding,” Schmidt said. “But even if money was not an issue, we would still do it the same way.”

The couple has already spent $600 on engagement rings and $2,000 on wedding dresses, she said, but the biggest costs for them have still yet to come.

That’s not including a honeymoon, Schmidt said, which the couple is not planning on going on because of time restraints. “We don’t have the time for a traditional honeymoon because Hannah is a med student,” she said. “If we did, we would probably go to Italy.”

Garrido said she’s seen a significant increase in her wedding photography business since last summer’s ruling. “Since the legalization of same-sex marriage, I have attended about 15 same-sex weddings,” she said.

She charges around $2,300 for wedding coverage on average, she said, but her prices vary depending on the size of the ceremony and the number of hours she spends shooting it. She doesn’t recall the exact number, she said, but since the ruling she’s made several thousand more dollars than usual.

Part of that is because she’s been an LGBT activist for many years, she said, so many same-sex couples come specifically to her when they’re looking for a wedding photographer.

“The gay weddings have enhanced my schedule,” she said. “Now, I’ve had a slew of new clients that pay my rates. Instead of making a quick $400-$500 at a contract wedding, I’m booking a lot more through my own company now.”

While it may take some time to truly see how much Minnesota’s economy will gain from legalizing same-sex marriage, Garrido said she thinks it’s clear that it’s a gain for the state.

“I believe the economy is profiting from same-sex marriage,” she said. “I know it has increased business and profit in many of my fellow wedding vendors. My sales alone have increased by several thousand dollars.”