We don’t often think about how we pollute our watersheds and corrode our cars to preserve public safety, but this is the confusing math of road salt in winter. Keeping roads clear of snow and ice is a critical safety responsibility in Minnesota. Road managers as well as homeowners with driveways depend on salt to help with that.

Road salt ends up washing chloride into groundwater and aquatic ecosystems. As the chloride concentration in water goes up, it starts harming the animals, plants, even drinking water that make Minnesota’s aquatic resources so valuable.

The Minnesota Pollution Control Agency recently reported that in over a quarter of its monitoring wells in metro-area sand and gravel aquifers, the chloride levels outstrip the EPA’s drinking-water guidelines. As little as a teaspoon of road salt can seriously pollute 5 gallons of water, and there’s often no real way to get the chloride out of the water after it’s there.

In the MPCA’s recent draft list of metro-area bodies of water that are impaired by chloride, 35 out of 44 are new to the list for 2014–and many more waters around the state still haven’t been tested. 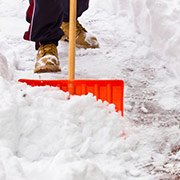 High-tech moves like Cottage Grove’s infrared road-sensing salt trucks, which minimize salt use by keeping it to where it’s most needed, are a promising investment but harder to afford for many communities. Prewetting salt or using liquid brine (perhaps a low-cost option from cheese producers, like they’re trying in Wisconsin) is another helpful option, which MnDOT uses because that makes the salt stick better to the road. Not only does that speed up melting, but it uses less salt. Even driving the salt trucks slower can cut down on the amount of salt.

It would be a relief if we could phase out salt altogether, and transportation departments in Minnesota have recently been testing out a whole series of agricultural byproducts to clear up winter roads, mixtures based on lower-chloride things like sugar beets or corn. When these alternatives are used on their own without also using some salt, they unfortunately still don’t get it done to MnDOT’s standards. Blending alternative deicers with salt brine has actually been an improvement over straight salt in MnDOT tests, though, likely because those blends can pack in more deicing ions in the same volume of stuff.

For homeowners, try to shovel and scrape as much as you can, and you won’t need salt as often. Figure on skipping salt entirely on your own driveway when it’s under 15 degrees, too. Regular old sodium chloride doesn’t actually do much to melt ice below that temperature; stick to sand in those cases.