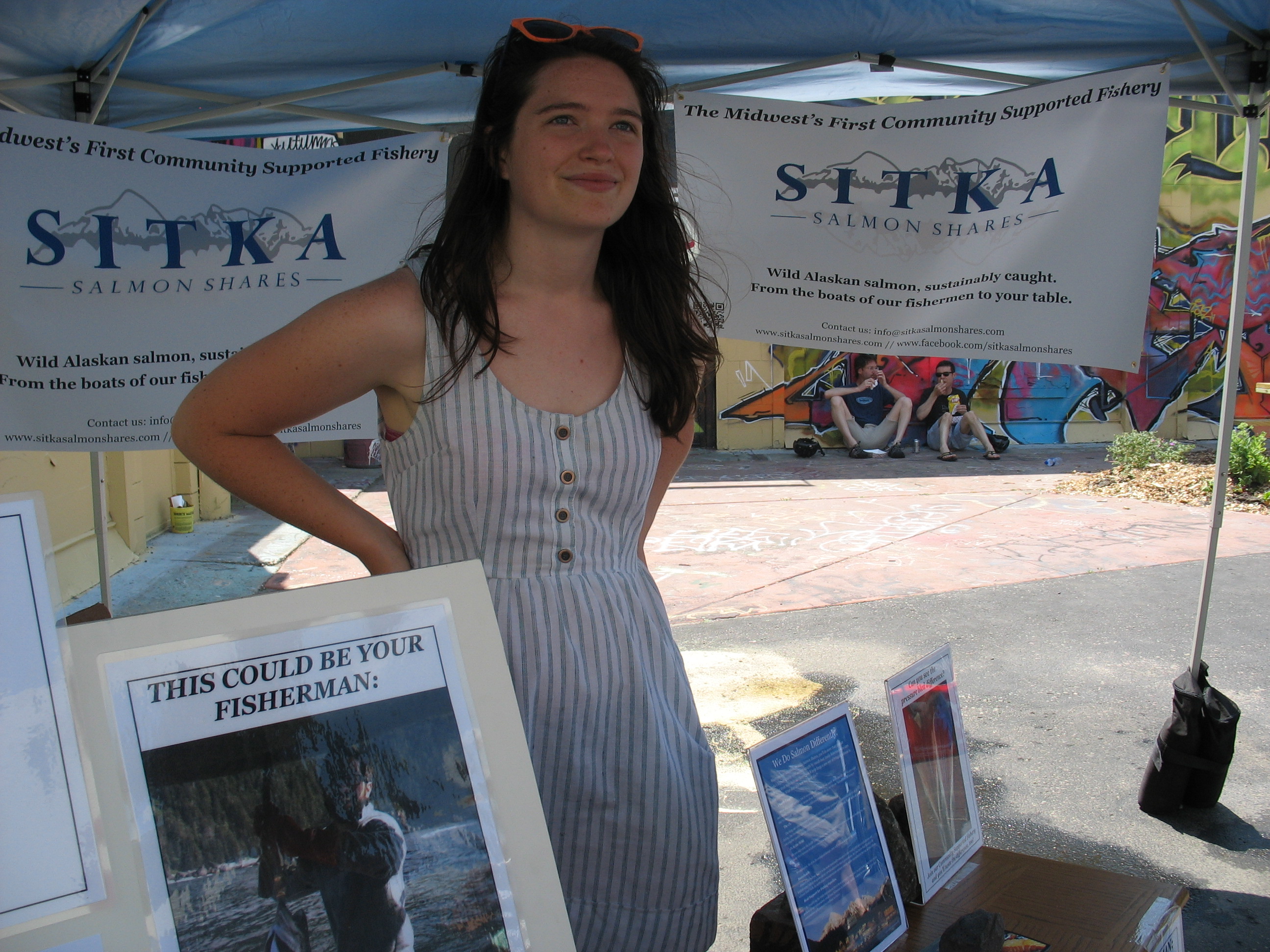 Helen Schnoes speaks with customers about the Twin Cities' first Community Supported Fishery at the opening day of the Uptown Market, sponsored by Sitka Salmon Shares.

It’s that time of year again when Minnesotans dust off the fishing rods and head up North. This year, you might not even need to bother. If you have a craving for salmon, Sitka Salmon Shares, a Community Supported Fishery (CSF), delivers fish to subscribers.

As in Community Supported Agriculture (CSA), customers pay up front for a share of the harvest. In this case, subscribers will receive shares of Alaska’s wild sockeye, king, and coho salmon harvests in June, July, and August. Shares are offered in 15 pound, 24 pound, or 36 pound subscriptions.

“I think of it as the grown-up way of selling candy bars to neighbors,” she said.

The fundraiser was a success and people began asking how they could continue getting this delicious salmon delivered to their homes. The idea for a CSF came from Schnoes’ Knox College professor, Nicolaas Mink, who specializes in developing ways to make food systems more equitable, just, and sustainable.

“At the heart of the CSF is a unique model that allows the small boat fisherman to survive,” Mink said, “Ten years ago, farm salmon came on the market and completely wrecked the wild salmon economy. Small boat fishermen have been fishing the way they have been fishing for generations. It’s as much a culture as it is a job. There needs to be creative solutions to allow these fishermen to survive and compete against farm salmon.”

According to Mink, about 80 percent of the salmon consumed in the United States is farmed.

“It’s about respecting the salmon. We know it’s going to go to someone’s plate. For example, we don’t pick up the fish by its tail, which causes bruising,” said Winston Warr, a gillnetter who supplies sockeye for the CSF.

As of the first week in June, the CSF shares were half sold, with sales scheduled to continue until July 15. Even more people showed interest at the opening day of the Uptown Market on June 11, which was sponsored by Sitka Salmon Shares. (Uptown Market is a non-profit, volunteer-based market and has different levels of sponsorship to help support it. As sponsor of the week, Sitka Salmon Shares paid a certain amount of money and got tent space to promote their CSF and also help support a non-profit that shares similar values to their organization.)

Ann Masemore of Minneapolis signed up for a share after vacationing in Sitka, Alaska last year.

“You’re supporting the livelihoods of people who are fishing in a more sustainable way,” she said.

CSF subscribers are eager for their salmon shares to arrive.