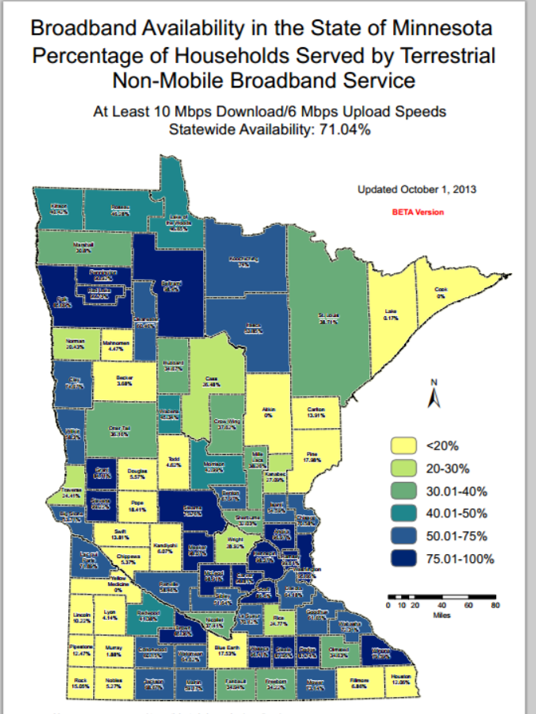 With long experience promoting rural broadband, I carefully reviewed Raul Katz’s article in the Star Tribune on February 24 about the impact of sales taxes on broadband capital equipment investment.   I was reminded of his analysis today (March 17) when I saw a shared letter from Minnesota’s two primary telecom lobbying organizations, again in the Tribune.

While I generally agree with the primary point of his study – when taxes go up, people purchase less; this is elementary economics.  I would strongly disagree that the sales tax is the major barrier to achieving state broadband goals.

I share some of his other views – that broadband is increasingly important to Minnesota’s future and that investments in broadband infrastructure drive benefits throughout the economy.  The 2010 legislature set in statute the state’s current broadband goal of 10-20 Mbps available to everyone by 2015.  Adopting that modest goal required compromise by rural broadband advocates, who settled for a modest, but obtainable goal; the ubiquitous broadband goal was a critical victory.

Unfortunately, the latest Connect Minnesota data confirms that in most rural counties less than 50% of residents have access to broadband that meets that goal.

In 23 counties, less than 20% can subscribe to broadband meeting the goal. In Aitkin and Yellow Medicine Counties, no residential services meet the state goal.

Katz touts telecommunications industry capital investment  – $865 per capita over six years. Over those same six years, many families might pay over $20,000 for telecommunications services, with bills averaging $300 per month for television, Internet, landline and cell phone services.  I know that I do.

In Kanabec County, where only 27% of residents have goal-meeting broadband available, two-thirds of people live in the countryside.  Excluding the federal stimulus projects, the USF-supported investments by locally owned rural telephone co-ops, and the enhanced cellular service aimed up and down highway corridors, broadband investments in greater Minnesota — especially outside of rural communities — seem small, especially as measured by progress toward our state goal.

I watched the recent Task Force discussion on the sales tax repeal.  One alternative would have dedicated some of that revenue to stimulate the deployment of rural broadband networks.  This approach, ultimately abandoned due to the objections of Internet service providers on the Task Force, would have actually ensured progress towards our state border-to-border broadband goal.

Again, few would dispute that sales taxes on capital equipment provide a disincentive to broadband investment.  After all, the Department of Revenue estimated that this tax generates $70 million dollars per biennium.  We do need great broadband throughout the state, including the affordable Gigabit services that are becoming available in some of the Twin Cities’ greatest economic competitors.

What I do argue is that removal of the sales tax will do little to stimulate broadband investment in greater Minnesota.  In fact, the sales tax might add only $150 in cost on a $5,000 per home network investment, as approximately 50% of the deployment cost is devoted to labor.

This sales tax is not the primary barrier to rural broadband deployment.  In fact, when the FCC offered its Connect America Fund subsidy of $750 per line to incumbent providers to extend broadband services (five times the incentive offered by the sales tax exemption), many of those funds went unused.   The true barrier is investor-owned telecom provider requirements to finance long-term network assets with short-term capital and to obtain adequate ROI for every network extension.  Almost every underserved community has heard the phrase “We can’t make a business case.”

The hundreds of rural Minnesotans who attended regional broadband forums or who participated in the recent Border to Border Broadband Call to Action Conference, an event sponsored by an alliance of 25 statewide and rural regional partners, are hoping for a more complete and honest response from the “All Minnesota Broadband Alliance” as to their intentions and strategies for reaching the state broadband goals.  I hope that it goes well beyond advocating for reinstatement of the providers’ sales tax exemption.  After all, 2015 is just a few months away.