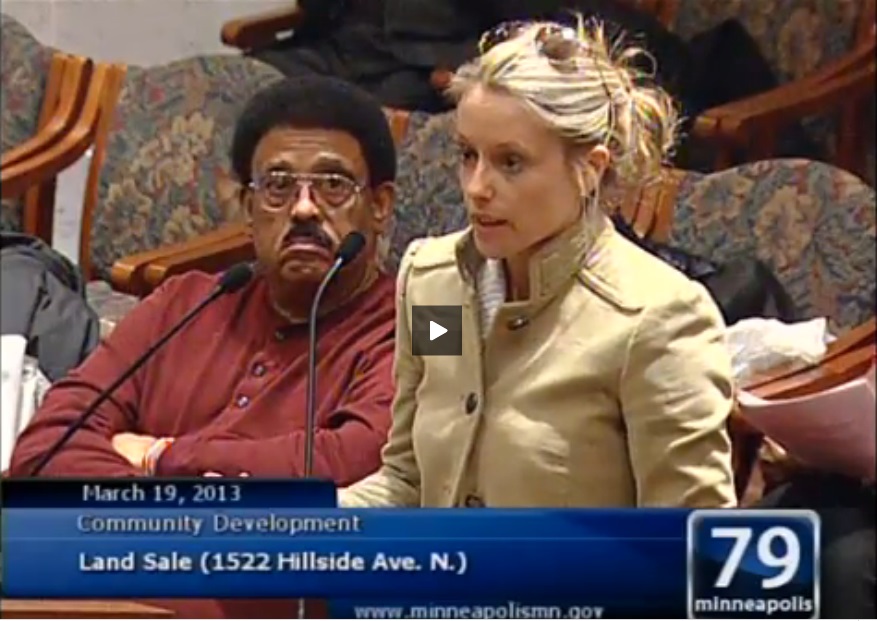 Last week the sale of 1522 Hillside Avenue North cleared one of the final hurdles before Nicole Curtis can begin restoration of this historic property. Council member Goodman called the sale a “no-brainer,” and initiated a 20-minute discussion about how to preserve more houses and engage the private market in a better way. The motion for 1522 carried unanimously, but the preceding discussion marked what could be a sea change in city disposition of boarded and vacant properties.

For those of you who want to watch, it’s the first item on the agenda, and can be seen at the link above. If you’re more interested in celebrities than policy, Nicole Curtis speaks at the 25:00 mark. The discussion leading up to that was ripe with all sorts of fascinating information, and began with Lisa Goodman asking how we got to this point (“this point” presumably being that a house was almost torn down before a developer of Ms. Curtis’ stature came along to save it) and how we could get here faster. For the “249” properties that the city owns, how can the city get word out there that these are available for rehab? How can we work more collaboratively with Regulatory Services regarding demolition and preservation? And how can that happen faster than the eight months that the 1522 process has taken? (For those who aren’t housing policy wonks: “249” refers not to a number of properties, but to the chapter of Minneapolis’ code of ordinances that governs vacant properties.)

Tom Streitz of CPED’s housing division (that’s the city’s economic development arm, and hopefully the last item in need of parenthetical explanation) responded that if there are people who want to buy, then they would love to sell. They want to make sure the people who do buy such houses have the financial and technical wherewithal to complete the job. There have been instances in the past where buyers do a job and get halfway through before realizing they can’t handle the full scope of bringing that particular house up to code.

But the city is working on a process that they will bring forward within the next few months. That process will be open and transparent, and will be available on the city’s website. Council members Johnson and Glidden are also working with city attorneys in developing how the process can meet legal muster and best ensure that buyers have the ability to deliver a good finished product.

Streitz also pointed out that not all properties that come forward for demolition are controlled by the city. Many are either privately owned or held by Hennepin County, which has its own process for disposition. City staffers seemed to emphasize this point, that from their perspective a small portion of demolitions are on city-owned properties.

To which I must counter: I’ve been watching the city planning application documents for quite some time now. It is my (admittedly unscientific and anecdotal) recollection that much of the demolitions in north Minneapolis over the past year or more have indeed been on city-held parcels, and the demolitions outside of north tend to be driven by private parties. In fact, I can only recall one demolition that I or other northside preservationists have contested that was not a city- or county-owned house at the time it came down. In that particular case, I must say that the city staffer was actually quite helpful in slowing down the process by a day or two and putting me in touch with the private individual to see if an alternative could be found. I don’t mean to quibble too much, because overall it seems the discourse is heading in the right direction. But it bears repeating that a significant number of demolitions that many neighbors are unhappy about happened with properties that were controlled by local government at the time they were torn down.

Both Robert Lilligren and Lisa Goodman stated that developers have at times approached them about the availability of such properties, and because of that, they were looking forward to seeing an open and transparent process for acquisition. That exchange brought to mind numerous neighborhood meetings where community members voted to approve demolition because they were under the impression that nobody wanted these houses. Yet the chorus from those wanting more houses saved has been that good developers DO want such houses, they just don’t know about them or how to go about purchasing them.

As the market returns, Streitz said, the new process will present an opportunity for a great outcome with more and more houses rehabbed. I wholeheartedly agree with that sentiment, but again I am compelled to repeat another preservation mantra. The house that was built in 1890 or 1920 has been there for almost a century, maybe more. With appropriate rehabilitation, that house will be here for another century, maybe more. The few years it sat empty were a blip, a blink of an eye over the lifespan of that house. Sure, to you and me it seems like a lot of time, but to borrow a line from the movie “Grand Canyon,”

“I felt like a gnat that lands on the ass of a cow chewing his cud on the side of the road that you drive by doing 70 mph…That’s a piece of time too small to even get a name.”

From that perspective, if it makes sense to hold these houses as the market recovers now, why didn’t it make sense to do so a year ago? Or two? Or five? God forbid we have another housing crisis that’s anything like what the northside has experienced in recent years, but if we do then I hope people take a longer view when determining how to respond.

Lilligren went on to remind CPED staffers that he’s been in the Phillips neighborhood long enough to remember similar issues, and he wanted to remind people that the “doomsday scenario” of people unable to finish a project wasn’t what normally happens. His experience as a housing activist was that they could save houses and yet they were torn down at the authority of the city.

Which brings us back to both 1522 Hillside and what kinds of criteria would be used to determine whether a particular property was salvageable by a particular party. I think we can all agree that we don’t want this emerging process to facilitate either poorly-done work or rehab ventures that stall midway through. But the city’s assessment of the Hillside property is that it would cost a minimum of $325,000 to rehab. Other non-profits have quoted a figure approaching $700,000 to $1,000,000, and I don’t think they were joking. Nicole Curtis proposes to do this project at a cost closer to $100,000.

Again, it has been the position of many housing advocates that the city’s numbers don’t adequately factor in how a contractor can do his or her own work and greatly reduce repair costs. So while the new process, once unveiled, should strive to ensure quality work is done, it has to take this factor into account in order to be successful. If someone with all of the necessary means to do this work can’t show that they have several hundred thousand available, even if they only really need a fraction of that, then we’re right back where we started.

Hearing the conversation, I had one other concern and that’s around timing. 1522 Hillside is rare, but by the time the sale closes, it will have spent nine months in bureaucratic gestation. If I’m a developer, and I’m looking at investing $100,000 in a Minneapolis property, how long will I be willing to have my money lay fallow before I take it elsewhere? If the process is too long, then private parties won’t participate to the degree that we would want them to.The committee finished by asking about how to make sure there are both quality controls in place, and sufficient due process to show there is no favoritism happening. Certainly if an applicant has outstanding work orders or assessments that would be a reason for not accepting their offer to purchase a 249 property. But where is the line? One? Ten? Forty?

The sale of 1522 Hillside passed the committee unanimously, and a new mechanism for working on boarded and vacant structures appears well underway.

Image: A screen shot of the 3/19/13 Community Development committee meeting