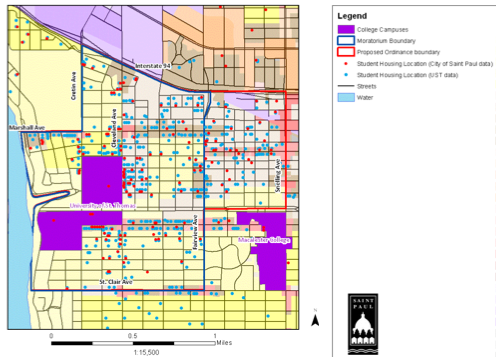 Bordering the University of St. Thomas campus, Union Park has sometimes been defined as a “UST neighborhood,” but that could change due to the recently passed Saint Paul student housing ordinance.

Going into effect last June, the student housing ordinance requires that any new student rentals within a certain area must be at least 150 feet away from other rentals.

“When I moved into my house in 1984, the local colleges were assets to the neighborhood,” resident Carrie Daklin said. “St. Kate’s and Macalester still are, but recently it just feels like St. Thomas has overrun us.”

A St. Paul City Council student housing zoning study done last May estimates the number of UST students living within one mile of the campus to be approximately 2,000, almost 20 percent of the school’s total enrollment.

“Yes, I will always be in the St. Thomas neighborhood,” Nancy Hone, a long-term Union Park resident, says of the neighborhood’s popularity with student housing, “or better yet, St. Thomas is in our neighborhood.”

She adds, “best [would be if] we share a neighborhood.”

Daklin says that such a balance may be hard to establish.

“There just is something not working with us, the powers that be at UST, and the students.”

Urban planner and Union Park native Josh Capistrant says that the missing factor might be variety in the neighborhood’s demographic. “When I work on a neighborhood, the key factor is diversity,” Capistrant says. “Five St. Thomas houses surround mine and that is just not diverse.”

A group of Union Park residents began meeting five years ago to discuss the prevalence of Saint Thomas students in the neighborhood.

“A few years ago I tossed out the idea of limiting the concentration of student housing,” Shaun McElhatton says, “and it just went from there.”

While his idea formed the foundation for the recently passed ordinance, McElhatton is not completely optimistic.

“I don’t think the ordinance by itself is the solution but I think it is one more tool to maintain the balance.”

Hone agrees, “As long as there is disruptive behavior ranging from serious drug dealing [to] drunken loud all night parties, the Housing Ordinance does not do enough to solve these problems.”

For Hone, Union Park’s reputation as a St. Thomas neighborhood is one that she finds unsettling.

“Both my husband and I are alum and we are embarrassed to tell anyone that with the current reputation St. Thomas has for its drug and alcohol abuse,” Hone says. “The perception of Union Park being a St. Thomas neighborhood will remain a black mark on our properties.”

Saint Thomas Class of 2016 Senator Michael Gaytko acknowledges the complaints many residents have of the student body. “I think that often, many students forget that our campus isn’t an island,” He says. “We aren’t always the best of neighbors.”

Resident Chris Montbriand says, “It definitely feels as if the students aren’t invested in our neighborhood the way those trying to raise a family might be.”

UST Area Manager of Off-Campus Student Services Josh Hengemuhle agrees with the observation. “I do see the residents’ point,” he says. “Most students are in the neighborhood for a year or two at most, versus a decade or two for most residents.”

Hengemuhle adds, though, that the university does not support the Housing Ordinance. “It seemed that if the city council thought this was a good practice for neighborhoods around campuses,” he says, “it should be applied broadly throughout St. Paul.”

Co-chair of Students against the St. Paul Housing Ordinance and member of St. Thomas’ class of 2010, Andrew Hasek opposed the restrictions as well. “Not only will home seller’s options be limited by the ordinance,” he said, “but it also pushes students further from campus and ups their rent for the already scarce number of homes near school.”

Despite Saint Thomas’ opposition to the ordinance, the university and the Union Park neighborhood council have been working together to schedule block parties so that new students can attend the events as well.

“This would allow students and neighbors to interact in a social setting as equals,” Hengemuhle says, “getting to know each other the right way.”

Many residents support such an idea, finding the presence of Saint Thomas students in the neighborhood to be a positive one.

“I knew what I signed up for when I moved into a college neighborhood,” Montbriand says, “When I was in college, I came down here a lot for parties. I understand that the mistakes these kids are making are all part of growing up.”

Long-time resident Kali Cruz says, “Living in a community with colleges has its ups and downs, but the positive aspects those schools bring to our neighborhood – economic growth, enrichment opportunities, diversity – far outweigh the negatives.”

McElhatton says, “It’s a good neighborhood with good people and I think if we work together we can balance the demographics.”