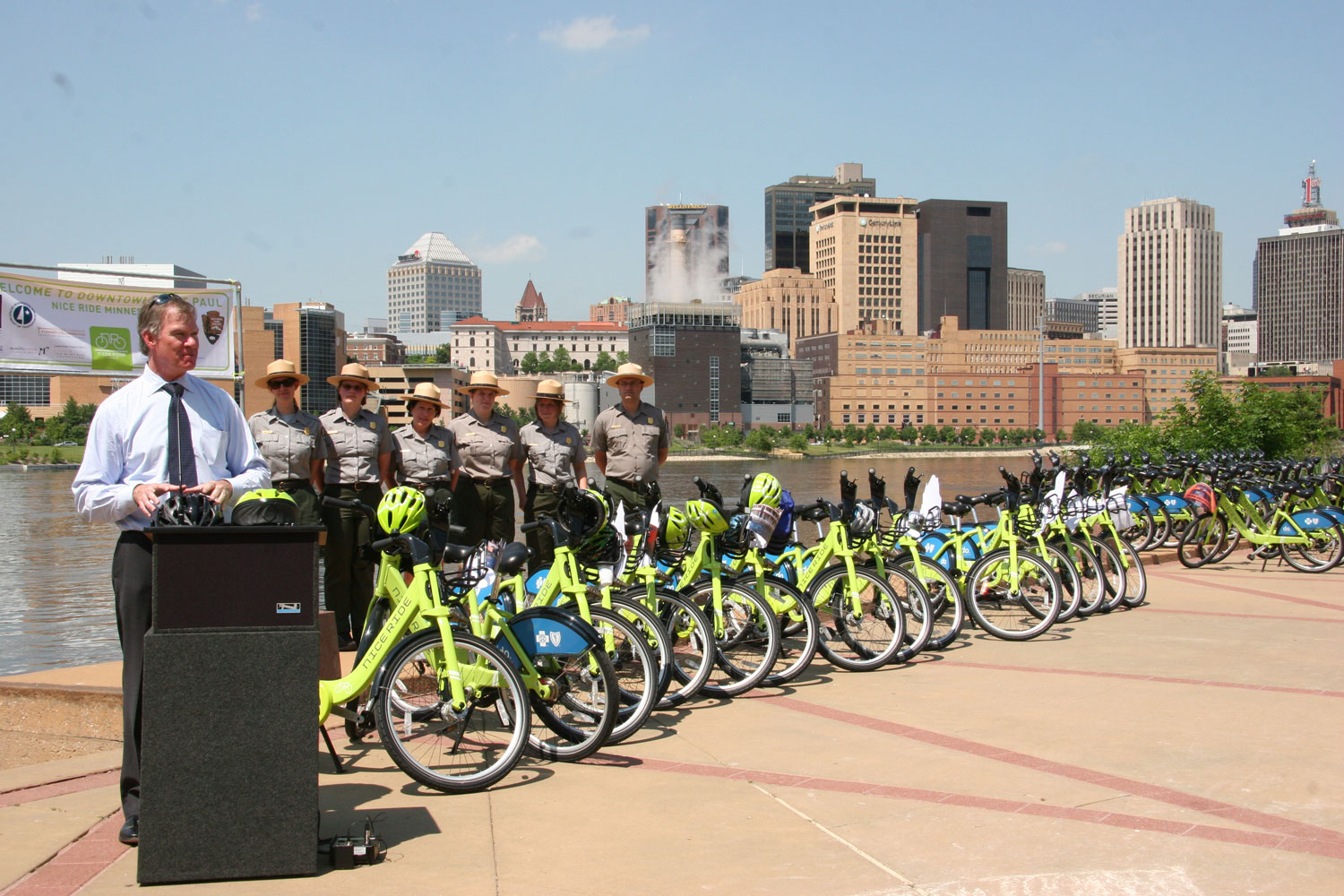 I saw my first NiceRider this week, an Asian student crossing the Wasington Avenue bridge on the University of Minnesota campus. It seems that, barring massive snowstorms forcing the bright green bikes to scuttle back to their hibernation caves, the Nice Ride season is upon us. They’re even expanding again, adding 24 new stations along the river and in South Minneapolis.

According to the NiceRide organizer, Bill Dossett, the focus of the Saint Paul expansion was on the downtown:

“The real focus this year is to do downtown St. Paul,” he said. “St. Paul is so tied to the river and is very much a river city.”

He said hotel patrons and downtown workers will be able to use the bikes to enhance what might otherwise be a walking lunch.

“The bikes make it easier for people to go a little bit farther on their lunch hour,” Dossett said. “Rather than being able to walk eight blocks, they’ll be able to go a mile or two and access the riverfront.”

Yet if the goal of NiceRide was to get people to ride around downtown Saint Paul, last year has to be considered a failure.

I did a rough survey of a representative sample of 10 stations from each of the downtowns, and the results are disheartening for Saint Paul bicycling. Of the ten stations in Saint Paul, only two locations came close to the 1,000 trip barrier. Most spots stayed well below 300 trips per season (or about two rentals per day per station). By contrast, even the worst performing Downtown Minneapolis station was almost at 2,000 trips, with the most popular (the IDS Center) exceeding 10,000 trips during the bicycling season. The total trips at the 10 Minneapolis locations was 46,379, while Saint Paul’s locations equaled just 5,594, a tiny fraction of the city to the West. 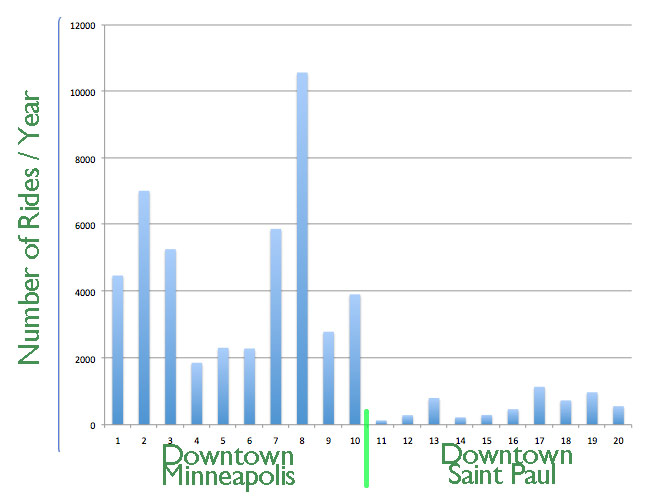 A comparison between 10 Nice Ride stations in each downtown.

Why Were Saint Paul’s Numbers So Dismal?

There are lots of potential culprits for the gap between downtown Saint Paul and downtown Minneapolis’ bicycling numbers. Most obviously, Saint Paul is more hilly. Lowertown is literally lower than the rest of downtown, and to escape from the core, you’ll encounter a hill in almost any direction. That might explain some of the variance. (On the other hand, last week I watched a Pedal Pub very slowly go up the hill at 4th Street, and they were having a great time. Overall, downtown Saint Paul is fairly flat, so I don’t think this is explains the difference.)

Still, that doesn’t really explain the gap to me. At worst, you’d have to expect that Saint Paul might have one third or one fourth of the number of bicyclists. (They currently have 12%.) The dismal numbers must have another explanation. What might it be? Are people in Saint Paul so different from people in Minneapolis?

In my opinion, the huge gap can be explained by one simple thing: Nice Ride bikes are mostly useless without Bike Lanes! 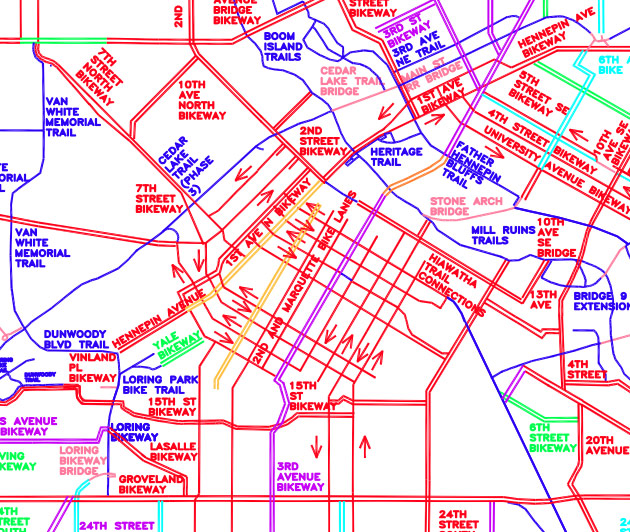 Downtown Minneapolis is filled with bike lanes. In fact, at least a dozen streets (except Washington Avenue) have designated space for bicycles. In Saint Paul, unless you’re a tiny section of Jackson Street, you’re not even going to find a single bike lane anywhere downtown.

That’s not to say that people don’t ride bicycles in downtown Saint Paul. I do, others do, lots of people ride bicycles through the city. We just do it in regular street lanes, because we’re used to riding bikes in the city, used to navigating in traffic.

However, Nice Ride is aimed at a different audience. Throughout the US, bike share systems target people who aren’t that comfortable riding bicylces: tourists, museum goers, office workers on their lunch break. These kinds of riders really need designated spaces to ride, places where they feel comfortable and safe on the street. And that means bike lanes or off-street trails, which are about as common in downtown Saint Paul as a snowplow in July.

Saint Paul has good intentions and fine goals. The city has a new bicycle coordinator (who writes for this very website), and has been working on a bicycle plan for some time. But without bike lanes in downtown Saint Paul, those eye-catching green bikes are are for urban bicycling what those Snoopy statues are for street life. They’re strictly symbolic. Maybe this year will prove me wrong, but I’m afraid that until Saint Paul has contiguous and comfortable bike lanes downtown, Nice Ride will remain a underused symbol of good intentions and lack of action. 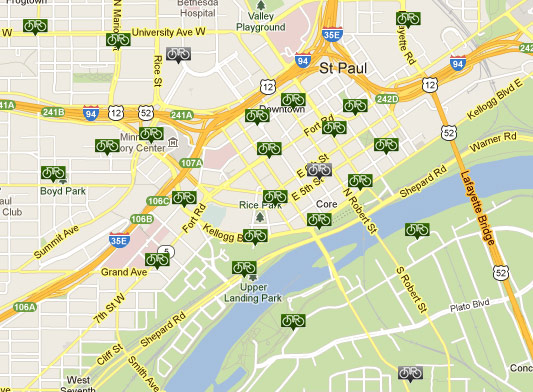