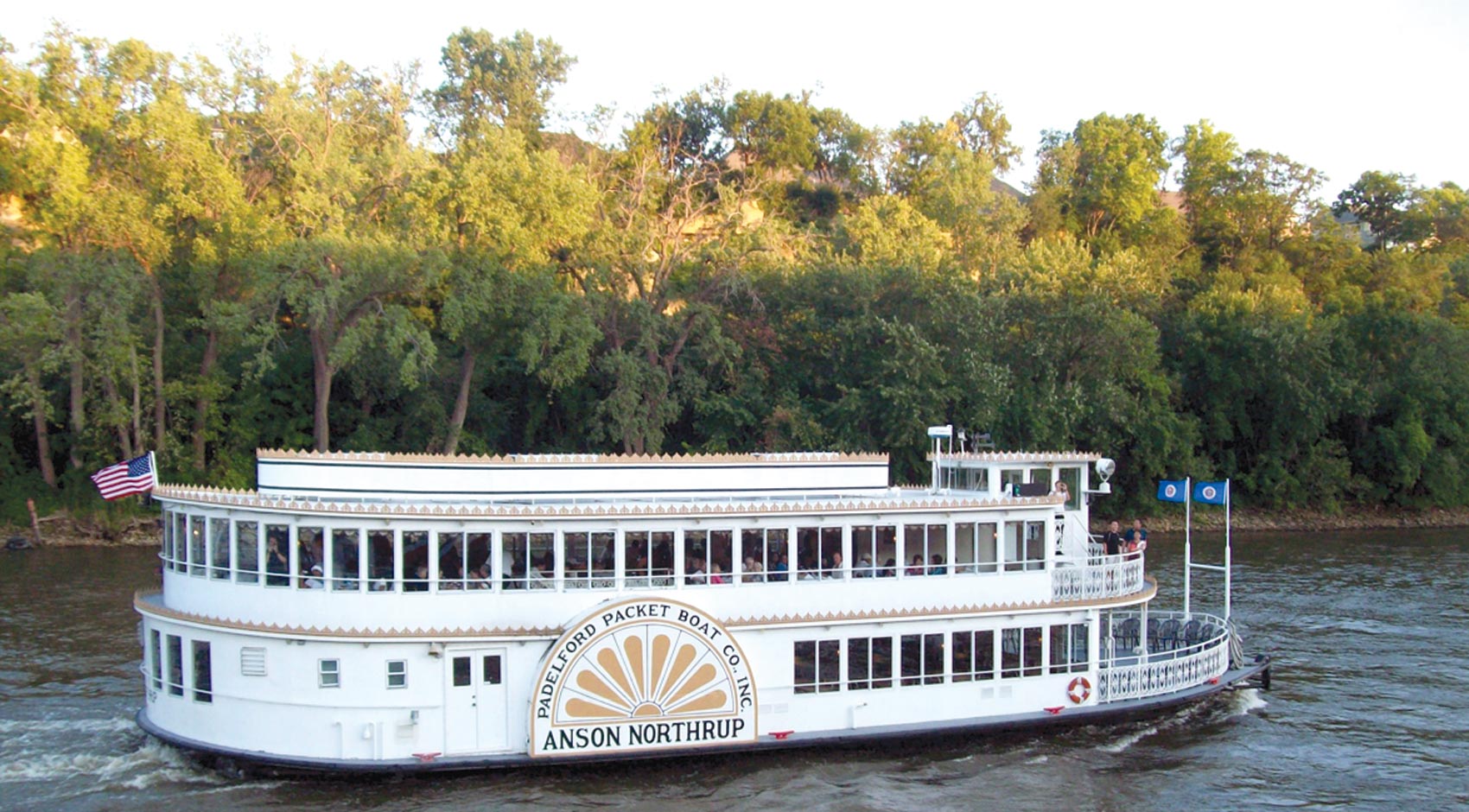 “Can you kids be quiet for a minute? I think a towboat is trying to call me on the radio.” This morning the pilothouse of the Anson Northrup is packed to the gills and I am surrounded by eleven-year-olds. They are standing around my chair, crowded onto the lazy bench, and spilling out the door. I have spent fifteen noisy minutes telling them about all the stuff in the pilothouse. I used to guide this passenger vessel up and down the Saint Paul waterfront. But now they are tired of my voice and want to stretch their own a little bit. I am hoping they have things to ask and say about how this experience on the river has changed their perspective, but the din is so loud by now that I am thinking of pulling out some of my newly gray hairs. Before I can, a large bald eagle swoops gracefully overhead and drops to the water, deftly removing a wriggling fish right in front of us. With a powerful push of his wings he lifts away, holding lunch in his talons. The pilothouse becomes quiet, save for the surprised exhales and the drawn-out “Whooooaaas.”

I’ve seen a lot of excellent teachers use some clever techniques for quieting a roomful of kids, but nothing works quite like a bald eagle swooping down right in front of the boat to snatch a fish from the river.

I seize the opportunity: “Any questions or comments about the river or the boat?” The questions and comments are priceless and cover a broad range of academic interests: “Would you honk the horn?” “Can I ring the bell?” “I could drive this boat. Can I drive?” “Have you ever crashed into anything?” Then there are the questions of morbid curiosity: “Did you ever find a dead body?” which segues into “Have you ever seen somebody jump off a bridge?” They again get quiet momentarily when I answer, “Yes and yes.”

Each fall and spring since 1996 we’ve loaded students aboard one of the Padelford Packet boats at Harriet Island. Their mission is to learn about how they are connected to this amazing body of water. The joint project between the Padelford Company, the DNR, and the Science Museum of Minnesota is called the Big River Journey. Six times a day we squeeze fifteen to twenty fifth and sixth graders into the wheelhouse to talk about the school subjects that help a person become a riverboat pilot. Anyone who thinks smaller classroom size has no impact on the quality of education can come spend a day of Big River Journey with me.

As a substitute teacher in Saint Paul Public Schools, I spend a lot of time at Benjamin E. Mays Elementary in the Rondo building. Some of the teachers at Mays—Bruce Goodwin, Bob Umhoefer, Stephanie Bensen, Monica Johnson, and Aaron Benner—had approached me about the possibility of doing a longer trip for their students. One of the co-owners of the Padelford Company, Captain Gus Gaspardo, who is very supportive of getting kids out on the river, jumped at the idea of a semi-private charter for these kids.

The trips with the Mays students are special because we go up through the lock at the Ford Dam. Along the way, students take photos and make note of things they see. After the trip, they organize all their notes and photos into a giant collage they design on a wall outside their classroom. It is covered with stories and pictures of their trip. 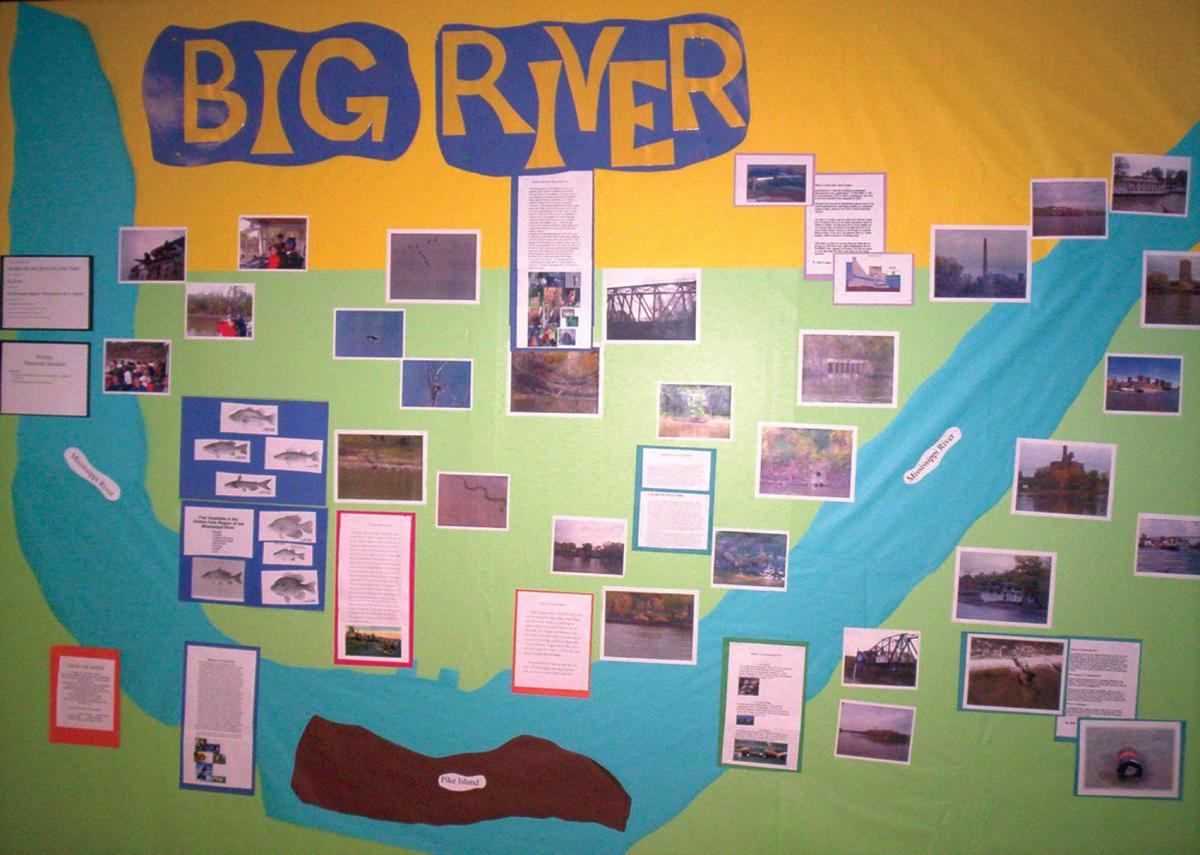 The best part for me is the reactions of the students. Youngsters who find it hard to focus in the classroom come alive on the river. Last fall a young man named Noah, who is constantly out of his seat during lessons in class, sat in rapt attention as I told stories about how I worked as a deckhand on the barges and then had to use all my school learning to study for and take my Coast Guard exams to become a pilot on the Mississippi River. After his group left the wheelhouse for the next station, I caught him sneaking back in again. Later it was just the two of us inside: “Mr. Deck, I mean Captain Bob, will you teach me how to drive one of these boats?” He stood beside me while we watched a short “V” of geese circle and descend toward the water next to a larger group mustering near the bank at Lilydale. Noah broke into a smile as all those webbed feet planed across the surface and the fat birds settled into the water.

“Those are geese getting ready to fly south for the winter.”

“How do they know which way to go?”

“You mean they use the river like a map?”

“Yup, it’s the Mississippi flyway. All the birds head south when it gets cold. Even those eagles go south along the river.”

A group of his classmates had gathered below the pilothouse window and were wondering aloud about these birds. Noah became the teacher. “Those are geese getting ready to fly down the Mississippi for the winter!” he called out the window. Then he looked up at me and cracked a smile as wide as the river. 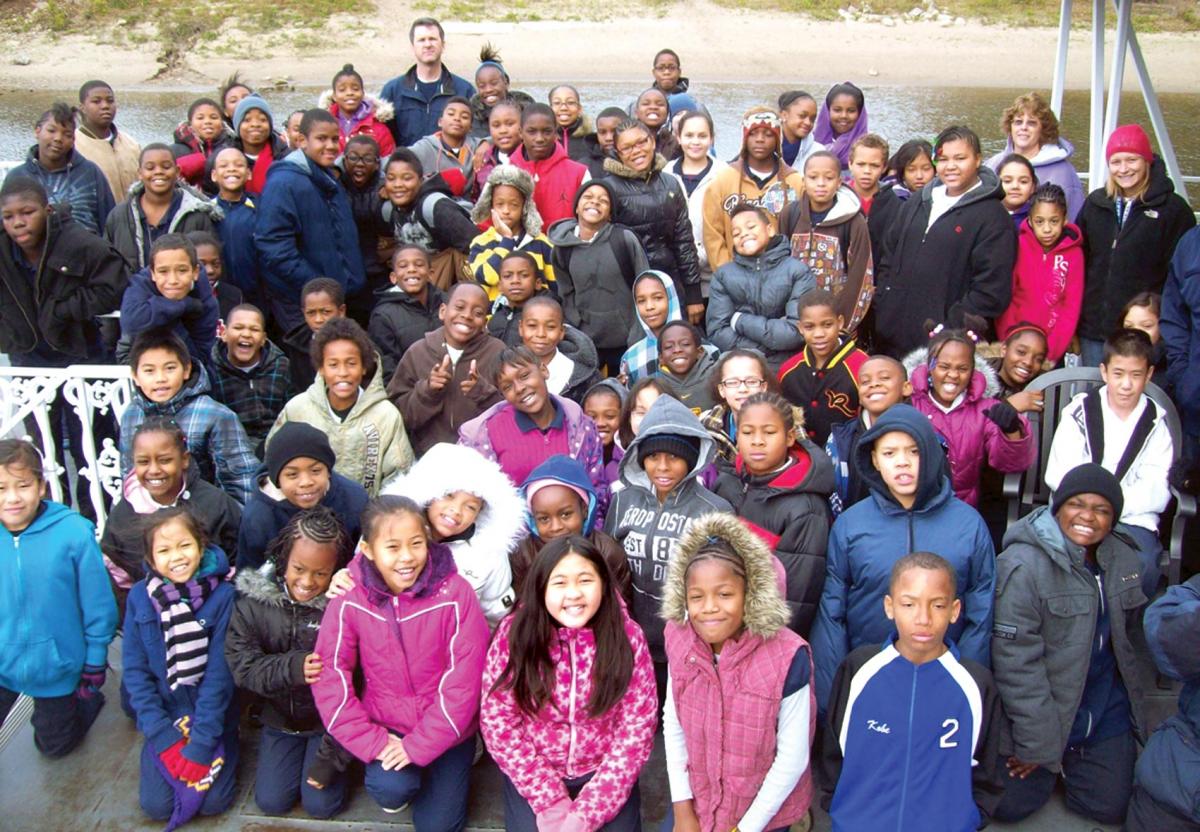