Anoka-Hennepin School District and Saint Paul Public Schools are the two largest school districts in the state. Being of similar size, you would think the incidence of suicide would also be similar. Why is Anoka-Hennepin seeing epidemic child suicide levels while Saint Paul sees none?

We’ve heard all too much about the horrors in Anoka-Hennepin. Their policy of just “ignoring it and it will cure itself” is about as dysfunctional as you can get. It’s not enough to empty the space of hatred, but we have to fill the void with care.

When we confront Anoka-Hennepin, we need to give them positive alternatives. There is a perfect model literally next door. Saint Paul Public Schools has an official support office called Out For Equity.

Saint Paul’s program supports the success of all children. Straight Saint Paul students have not been indoctrinated. They have not all turned gay just because Saint Paul supports LGBT students. Most importantly, Saint Paul children are not killing themselves.

No person shall, on the grounds of race, creed, sex, marital status, national origin, age, color, religion, ancestry, status with regard to public assistance, sexual or affectional orientation, familial status or disability be subjected to discrimination in any program operated by the school district or in recruitment, consideration, selection, employment or rates of compensation by the school district.

The Saint Paul policy does not seem that outlandish. It has been in operation for years in St. Paul. It has not brought on the apocalypse. Read on for some more ideas that work. Ideas you can share with Anoka-Hennepin. Ideas I’m sure St. Paul Schools would love to share.

In Saint Paul, the training requires staff immediately deal with harassing behavior based on discrimination. The victims are supported in developing a stronger sense of self. The teachers actually use incidence as teachable moments of why discriminating against entire groups of people is wrong. It is wrong for race, religion, and creed, and it is wrong for orientation.       Saint Paul’s Out For Equity does things like offer a safe place for LGBT and their friends to gather on Friday nights in a safe environment. They organize the gay straight alliances at all the High Schools. They also have in school support groups for LGBT students. One of their missions is also to reduce risky behavior by LGBT teens. When knowledge is swept under the carpet, teens and risky behavior go hand in hand. They are protecting our kids 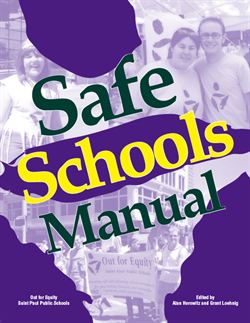 Not all districts are Anoka-Hennepin. Some districts support all their students in all the ways they can. Don’t tell Anoka-Hennepin to just stop. Tell them to stop, and adopt proven positive programs. Heck, they only have to travel a few miles down 694 to learn how to save their own kids. In all these years, there has been no gay-pocalypse in Saint Paul.