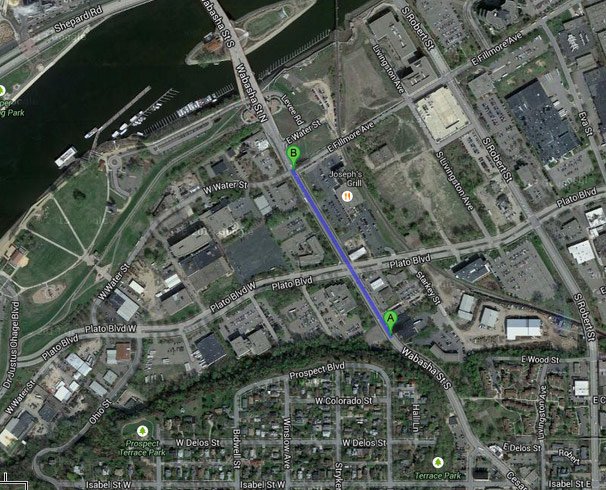 After years of lagging behind its neighbors, Saint Paul has finally come up with a bike plan. I’ve written many times about why this is important. For example, see these two pieces on the Nice Ride disparity between the downtowns, or this one on the great Saint Paul bike boulevard backlash, or this one on the angst-inducing state of many of the city’s main streets. But now, after years of starts and stops, Saint Paul has finally released its official draft “bikeways plan” for public review.

(Q: What’s a bikeway? A: About twenty-five pounds.)

Years ago, the new Saint Paul Comprehensive Plan laid out ambitious goals for increasing transit, walking, and bicycling throughout the city. For bikes, in particular, they called for a fine network of bike routes and choices in all parts of the city. Here’s the call to arms:

It is the desired goal of the City to increase the bicycle mode share from 2% in 2000 to 5% in fifteen years and increase the mode share of bicycling commuters from 0.6% to 2.5% during the same period. Saint Paul will become a world-class bicycling city that accommodates cyclists of varying skill levels riding bicycles for both transportation and recreation and encourages bicycle use as a part of everyday life (see Figure T-D).

Now many years and Joe Soucheray columns later, Saint Paul has finally followed through on its promise. And, particularly for a first attempt, the resulting map is ambitious and thorough. For example, the plan fills in lots of the gaps widespread throughout the city. The plan offers major and minor routes, and includes both short-term connections and long-term pipe dreams. 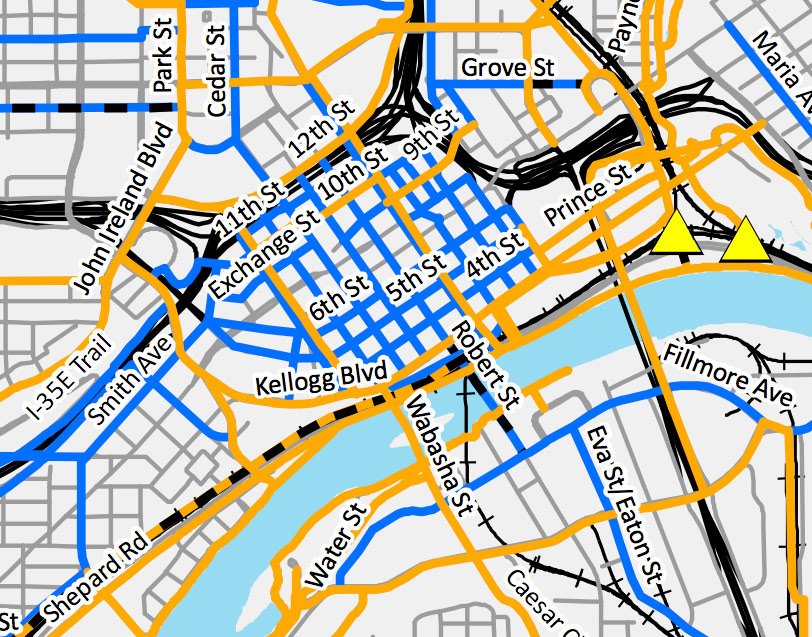 The highlight of the city’s plan is the downtown area. I’ve written a few times now about how isolated downtown is from the surrounding neighborhoods, particularly via foot or bicycle. This plan is explicit about trying to make those connections, completing the missing bike lanes at Wabasha, Kellogg, and Jackson (though the details remain hazy). 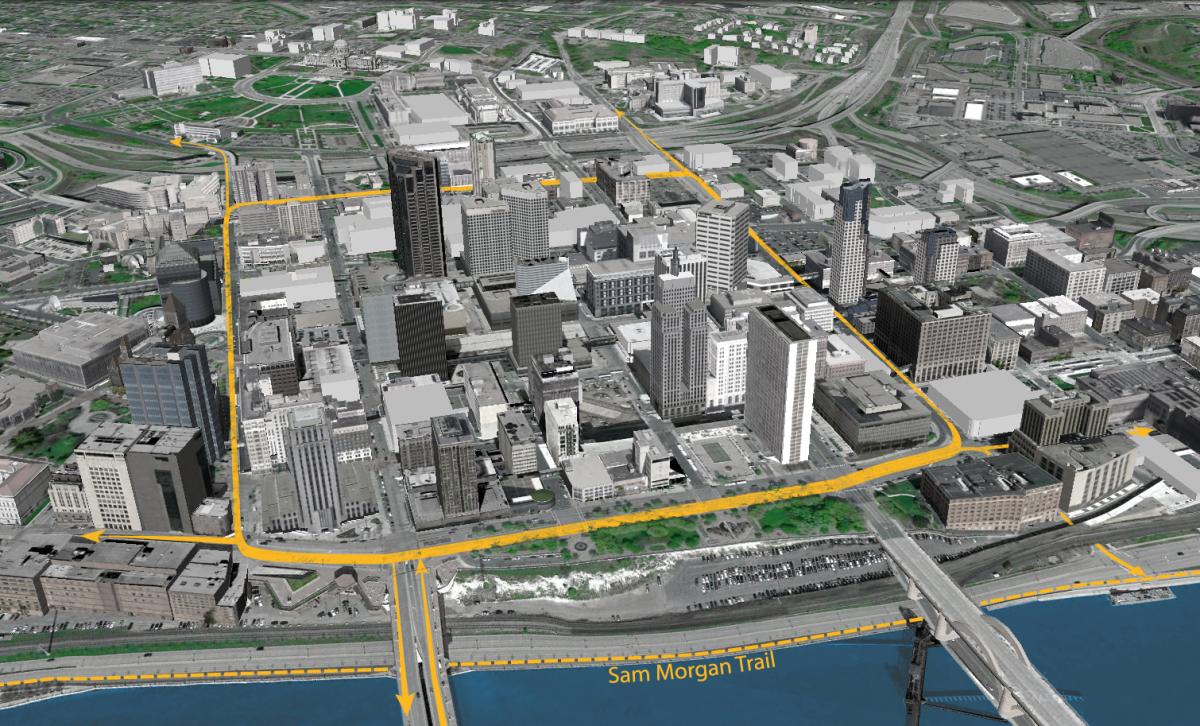 And perhaps the most unique part of the plan is the proposed “downtown loop” (BTW this needs a name: “the Pig’s Eye”?). The Saint Paul plan proposes a pedestrian friendly raised cycletrack that would connect the four corners of the downtown. The loop plan is modeled after a similar downtown trail in Indianapolis that runs through their older downtown and is designed for people of all ages to use bicycles safely.

The most important thing about the downtown loop is that is represents a shift in the theory of bike planning for the city. For many decades, bike plans and bike advocacy adopted an approach called vehicular cycling, which focused on educating bicyclists to ride highly visibly in the street, “driving their bikes” as if they were cars. While there’s certainly a great deal of credence to this theory of bicycle safety, this approach also had the consequence of encouraging a condescending attitude toward anyone who did not ride their bikes in this way.

For example, one of the early advocates for this model, John Forester, became famous for disparaging anyone who didn’t adopt his mantra. Here’s an example from his ubiquitious book, Effective Cycling:

Suggesting that bike-specific laws treat people like children – “the motorist-dominated institutions wrote laws that treated cyclists as children, and then designed and built bikeways designed for childish operation” (Forester xviii)

Basically, Forester argues that anyone who doesn’t ride a bike like he does is being unsafe, neurotic, and childish. And for a long time throughout the US, many bike plans reflected this vision. 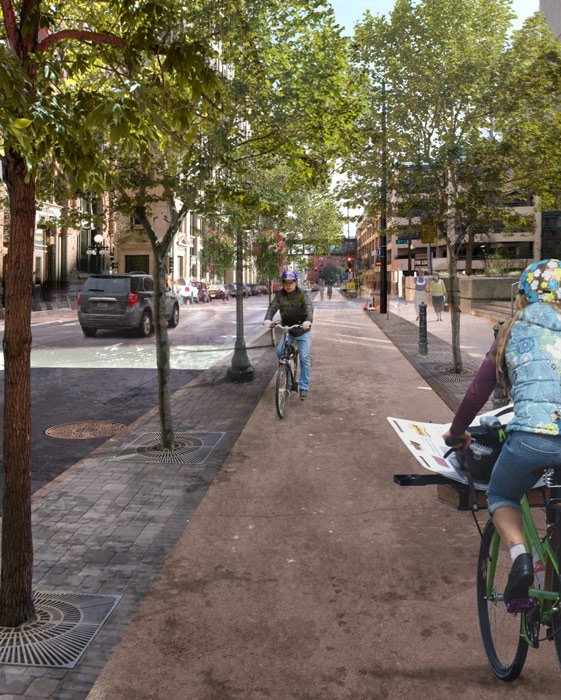 That’s one reason why the Saint Paul bikeways plan is so refreshing. I have complete faith that Forester would hate the proposed downtown loop, and would write it off as yet another of the “pitiful attempts of American non-cycling adult society to teach toy bicycling to its children” (Forester 661).

However, today Forester’s attitude is outdated. Many cities are no longer assuming that everyone on a bicycle is highly trained, well-equipped, and “professional” when riding a bicycle. Instead,we have cities filled with easily accessible bike share “cruisers”, traffic calmed complete streets, and what are called “8 to 80″ cities that are safe and comfortable for both the young and the elderly.

(Q: What is an 8 to 80 city? A: It’s this idea from Gil Penalosa, an urban designer from Colombia who argues that “if you create a city that’s good for an 8 year old and good for an 80 year old, you will create a successful city for everyone.”)

The new downtown bike loop which would connect together the city’s disparate trail network (e.g. the Sam Morgan and river trails, the Gateway trail, and the Summit Avenue bike lanes) so that someone cruising through the city would never have to get off the trail and “drive their bike” in traffic. Picture if you will, actual families with children riding bikes on this trail from the Children’s Museum to the Science Museum, or down to the Farmer’s Market from the Cathedral on a sunday. I personally know a 70-year old woman who lives in downtown Saint Paul and would like to ride a bike around, if only she could do it safely. Imagine such a world!

Another bonus of the downtown loop is that the proposal is focused on the whole streetscape, not simply the painting of a bike lane on the pavement. This kind of treatment would dramatically improve the pedestrian environment and walkability through the downtown, especially through the Modernist dead zone (slash-”Urban Rewnewal Historic District”?!) in the middle of the city. As Jeff Speck says in his excellent urbanism primer, focusing on making key corridors contiguous and interesting is the secret of a walkable city. Whether you’re on a bike or not, this plan is a big step toward making downtown Saint Paul more walkable (particularly along Kellogg and Jackson). The proposed loop seems like a plan that fits well with the intimate, museum-laden, and historic nature of downtown Saint Paul. 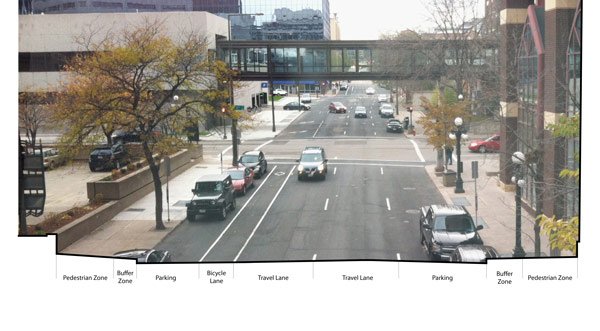 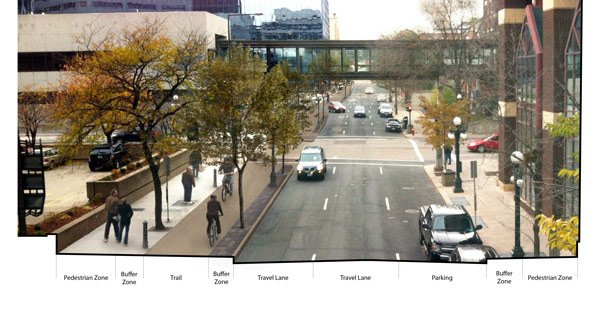 The one big grey area about the Saint Paul bikeways plan is its implementation. There’s basically nothing in the plan about how the city might pay for it, how long it might take, or which streets and routes to prioritize. The annals of urban planning are filled with great documents gathering dust, visions that never saw the light of day. Without a firm commitment from the Mayor’s office and the city funding process (e.g. the CIB committee), I could literally be dead by the time this map begins to take shape. (Likely squashed by an SUV coming down the hill to the Marshall Avenue bridge.)

The first open houses for the bike plan is this week, and it’d be great if Saint Paul can turn the page on its previous knock-down, drag-out, nobody-wins fights over bicycling.

At top: Wabasha Street: one of Saint Paul’s many frustrating bike lane gaps