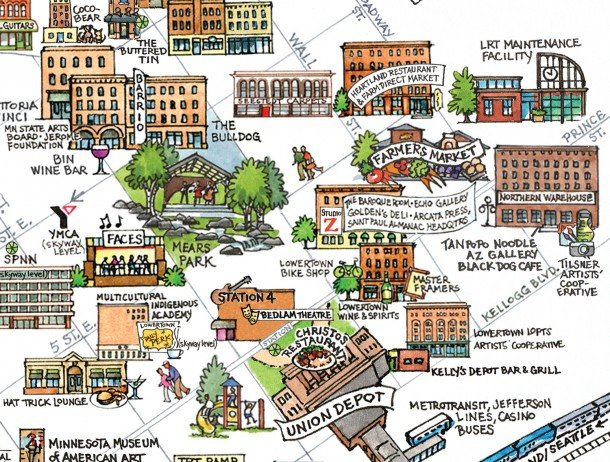 Detail of a map by Roberta Avidor, as seen in the 2014 Saint Paul Almanac

Over the past several years, the Saint Paul Almanac has grown from bathroom reading for Capital City buffs to a full-fledged organization engaging the city’s diverse communities through innovative programming—and, of course, that chunky book. On September 12, the Almanac will celebrate the publication of its eighth edition with a party at the Black Dog showcasing a wide range of local talent.

The party, which runs from 7:00 p.m. until “late,” will spread to nearby venues including Clouds in Water Zen Center, which will host readings by IBé Kaba, Marcy Rendon, Carol Connolly, and others; and to the AZ Gallery, which along with the Black Dog will feature original art commissioned for the new volume. Live music will range from traditional Irish folk to Indian sitar and tabla.

The almanac itself is being touted as bigger and better than ever, including poster-size hand-drawn maps of the city overall and downtown specifically. This year’s edition is dedicated to the memory of Rondo neighborhood writer Bertha Givens.