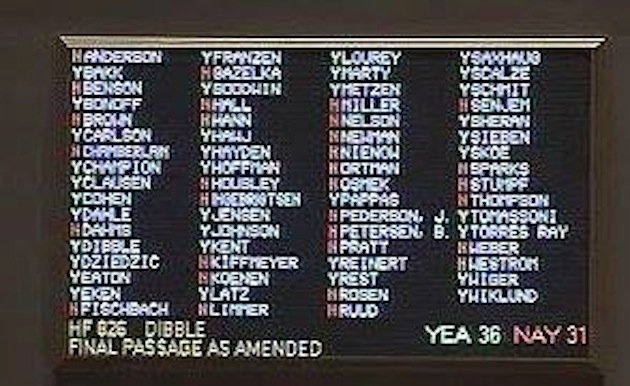 After a contentious debate inside and outside the Minnesota Legislature, the bill passed a major hurdle and now heads to the House where the bill passed last year. The House will have to concur with the changes made by the Senate, then the bill heads to Gov. Mark Dayton who has said he will sign it.

The bill is a comprehensive plan to tackle bullying in Minnesota’s public schools. It provides a clear definition of bullying, protects all students while listing 19 categories of students often singled out for bullying, creates a school climate center and council to provide up-to-date anti-bullying research to school districts, and focuses on bullying prevention as opposed to punishment.

Republicans tried everything to derail the bill. Amendments were offered to delete the current bill and replace it with North Dakota’s anti-bullying law, to strip the bill’s School Climate Center and School Climate Council out of the bill, to allow bullies to confront their accusers, to add a mention of First Amendment rights (already included in the bill), to mandate that parents be contacted before a school refers students to resources, to exempt contact sports from anti-bullying requirements, and to mandate parental notification when a student is accused of bullying other students.

Sen. David Hann, R-Eden Prairie proposed an amendment that would have mandated a pilot project in up to 9 schools for several years instead of the anti-bullying law applying to all school districts.

None of those amendments were successful.

Some changes were made to the bill, however. The bill’s purpose statement was stripped out, which is often done as the bill moves through the process. An amendment to beef up data privacy on bullying incidents passed, and another was approved that would prohibit the filing of a false bullying report against somebody. The School Climate Center was renamed the School Safety Technical Assistance Center in another amendment that passed.

The bill passed after almost 6 hours of debate.

“The voice that is really behind this effort is young people” said Sen. Scott Dibble, DFL-Minneapolis, the lead author of the bill. “I think this a good bill, a solid bill, a mainstream bill. It’s consistent with the way many many schools are already addressing this issue.”

Dibble has been working on a version of the bill since 2009 when it passed the legislature but was vetoed by Republican Gov. Tim Pawlenty.

Other DFLers gave impassioned speeches in support of the bill.

Sen. Torres Ray, DFL-Minneapolis, said, “This was the most moving experience I’ve had in a committee in the Senate.” She recalled hearing from a mother who lost her son. “I think we are taking a step that is incredibly important. We are going to take action, some of us are. And we hope we can create a world that is better for our kids. A world that is less cruel.”

Sen. Warren Limmer, R-Maplewood, said he didn’t know what the terms “obviously offensive” or “socially appropriate” behavior in the bill were. He worried that courts wouldn’t be able to either.

Sen. Roger Chamberlain, R-Lino Lakes, said, ”To believe we possess the collective knowledge and wisdom to fix human nature is beyond my belief.” He added that if the bill passed, it will be “another huge loss for the innocence of our children in those schools”

For some, it was about values.

Sen. Paul Gazelka, R-Nisswa, said that in his district he “heard that we should not have a climate center telling us what is appropriate behavior or values for our kids.”

Sen Eric Pratt, R-Prior Lake, said, “We need parents to help instill the right values in our kids” not the government.

The discussion of values is one the religious right used in fomenting significant pressure against the bill.

Pastors compared the bill to communist Russia, that it was an agenda to bring immorality into the world, that it would mandate sexually explicit curriculum, and that it’s part of a 45-point plan to create a godless America (along with labor organizing, marriage equality, and tax increases).

Religious right radio programs promoted those statements, including AM 980 host Paul Ridgeway who told his listeners, “We are not homophobic but we are not going to allow our children to be molded in a gay plan to mold our children to agree with evil and folks, this is what this bill does.”

Tea Party groups railed against the bill saying it “will create a climate of terror” in the schools.

The primary opponents of the bill, the Minnesota Child Protection League — which was formed from various other anti-LGBT groups — served to bring the religious right, Republican legislators, and Tea Party groups together.

“Tonight, I want you to be informed and learn why you need to be involved in what’s going on because this may be coming to your school very soon if this bill passes,” Anderson told the group. “In our society where children are being sexualized, homosexuality normalized, and the list of genders has grown from two to LGBTQQIA and that is lesbian, gay, bisexual, transgender, queer, questioning, intersex, asexual and counting, HF826 contains language that will usher in another sexual revolution, sexual anarchy, unrestricted sexuality to love whoever you want — polyamory — and its going to force its acceptance on all of us. You see a heavy hand is coming down from the federal government, Health and Human Services, under the guise of bullying prevention.”

A current member of the Minnesota House even helped craft a video against the anti-bullying bill that could only be characterized as bizarre. It gave inaccurate sex education lessons and claimed there’s an enzyme in sperm that causes AIDS, that gay men die at an average age of 41, that HIV is transmitted casually, and that the United Nations is responsible for making sodomy legal.

Ultimately, religious right efforts we unsuccessful and the bill passed the Senate by a margin of 36 to 31.

“Today we made strides in ensuring the protection and well-being of children across Minnesota,” Sen. Susan Kent, DFL-Woodbury, said in a statement after the vote. “Too often, we’ve heard troubling stories about the bullying our kids have endured and how it was not properly addressed. The Safe and Supportive Schools Act not only addresses bullying; it seeks to prevent it and keep our kids safe.”

“No child in Minnesota should have to choose on a daily basis between feeling safe and going to school, and with passage of this bill, they no longer have to,” Sen. Dibble said in a statement. “Our students will now be able to feel supported, our teachers and administrators will have the tools and training they need to address bullying, and our parents will not have to worry about the safety of their kids in schools.”

He added, “Misinformation perpetuated about the bill is unfortunate. This has always been about doing what is right for our kids. No child in Minnesota should be bullied, and every student is going to be protected thanks to the Safe and Supportive Schools Act.”