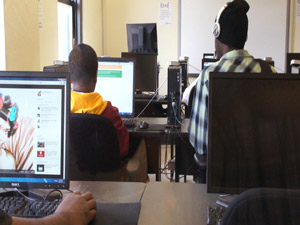 Computers are taking over the world. In recent years technology use has been growing exponentially in almost all areas of life. It infiltrates our jobs, our homes, our schools and even our personal relationships. While much of this increasing use of technology is extremely beneficial, there is a major downfall: a large group of citizens are being left behind.

Even though technology is becoming so commonplace, it is still very expensive. Because of this, many Americans are unable to access computers and more specifically the Internet. This develops a sort of digital divide between those who have access to this resource and those who do not. With the intention to lessen this divide in the Twin Cities by increasing Internet access, awareness, and use, the University of Minnesota developed what they call the Broadband Access Project. This program is run through the University of Minnesota’s Urban Research and Outreach/Engagement Center and is funded with the aid of a federal grant as well as matching support from the University. It finances 12 new or enhanced community based public computer centers in four federally designated poverty zones in Minneapolis and St. Paul. Unlike computers in public libraries, there is no time limit on the use of BAP computers, and a trained apprentice is on hand at all times to provide personal, one-on one-help to users. Because leaders of the project understand that computer adeptness has become a key job skill, the development of computer literacy through education is an important aspect of the BAP. Group classes targeting all levels of proficiency are offered at the larger BAP computer labs. These classes cover topics regarding Microsoft Office, financial support, social media for business use, and even Internet programming and design. Since 2009 the BAP has opened doors for community members to develop the technological skills needed to succeed in today’s times.

Even in this short lifespan, success for the BAP is clear. Each of the centers has stories to tell of motivated users who will come in day after day to job search and finally achieve employment. Robin Lewis, a user at the Sabathani Community Center lab, is impressed by the quality of the computers to help her with her current job search. “It’s been very helpful as far as being functional enough for me to find and look for work effectively,” she says. Not only are the computers a resource to find employment, but also computer skills and knowledge makes a person much more employable.

Although employment is a large focus in many of the centers, this is not the only benefit of computer access. The Internet provides the key to a wealth of information that would be unavailable without a computer. Charlie Stembreche, another user at Sabathani explains the importance of the Internet to him, “It helps me be aware of information that would otherwise be hard for me to get. In a practical sense, I’m trying to think, like if my bike broke down, where’s the local close by bike shop?” Also, Shauna Miller, the BAP apprentice at Sabathani, talked about how she once helped a woman at the center to find affordable housing, “So she and her kids didn’t need to live in a shelter anymore!” Because of email and social networking sites such as Facebook, computer users are more able to stay in contact with loved ones and associates as well.

A key aspect of the BAP labs is the individual attention and support users are able to receive when they visit, as well as access to free printing and faxing. Because of its relatively small size (there are thirteen computers at the Sabathani lab), Miller is able to help users one-on-one. She has even created worksheets for people to become familiar with Microsoft Office tools. Public libraries often have time limits on computer use, and charge for printing. “It’s just free and they like that, they like that we’re able to let them use the printer for free and faxing capabilities as well. We give them access to a lot more time, as we don’t have a time limit here. So they really like that and they really like the one-on-one help that we give,” Miller explains.

The people who come to use these centers understand the importance of having technological skills in order to be successful in today’s world. With the help of the BAP, one-by-one they are closing the digital gap in the Twin Cities. With increased funding the Broadband Access Project is looking forward to continuing to build the program. As Lewis says, “Computers are the way of the world!”

For more information or to find a lab near you visit www.bap.umn.edu.