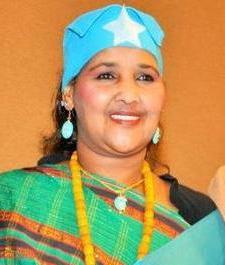 For more than four decades, Saado Ali Warsame, killed last week in a drive-by shooting in Mogadishu, used her songs and voice to plant seeds of peace and unity in Somalia and its diaspora communities in Minnesota and elsewhere.

I grew up in a household where Warsame’s songs were admired, the one boombox we had often buzzing with her music. Before I could talk, before I knew who this superstar was and before I could pronounce her name, I was singing her love song “Naftaydaa Kuu Jiraban” — one of the most popular songs in the history of Somali music — in unison with my older siblings.

Warsame used her early songs to confront government officials who spent public funds for personal gains while some citizens starved. In an attempt to silence Warsame, the now-fallen regime of the late military dictator Mohamed Siad Barre imprisoned her several times in the 1980s. But Warsame was undeniably fearless, and the arrests of intimidation never weakened her spirit or changed her decision to use her talents as a strong voice for the underdog.

Al-Shabab, a Somalia-based cell linked to the militant Islamist group Al-Qaeda, has claimed responsibility for killing the internationally renowned folk singer and member of the Somali parliament who lived in Minnesota from 2007 to 2012.

“Everyone who saw Warsame once loved her forever,” said Hiba Hodon, best known as Hiba-Nura, another well-known Somali musician and a Minneapolis resident. “She was beautiful. She was brilliant. She was unapologetic to say it like she meant it.”

Warsame was a gifted artist with a photographic memory, said Adar Kahin, a musician who befriended Warsame in 1980 and worked with her ever since.

“Give Warsame pages of a play script or songs today, and she would rattle them off immediately,” said Kahin, who’s now a community health worker at WellShare International in Minneapolis.

Warsame was also an actress, dancer and songwriter. She often attended international art festivals, receiving prestigious awards and representing Somalia. Among them was the Black and African Festival of Arts and Culture, which was held in Nigeria in 1977, said Hiba-Nura.

Warsame arrived in the United States in 1991, immediately after the civil war broke out in Somalia, Kahin said. She was a mother of three and lived in St. Cloud most of her time in Minnesota.

Warsame was less involved in Somali activism and political engagement in Minnesota in recent years. She was, nevertheless, an admired community figure, who spoke and performed at important community gatherings.

As part of the wave of people from the Minnesota Somali community who have returned to Somalia for employment opportunities and to help rebuild their war-ravaged homeland, Warsame relocated to Somalia in 2012 and was elected to the parliament.

Warsame’s return came after the African Union-backed Somali government had driven Al-Shabab militants out of their last strongholds several years ago.

Ryan Allen, an immigration expert and professor at the Humphrey School of Public Affairs, said he has noticed that many members of Minnesota’s Somali community have been returning to their homeland, but was surprised to hear that people like Warsame were part of the wave.

Allen said: “We’re seeing lots of Somalis going back, but her particular example is striking because the level of risk of someone who is in the public eye like her is considerable. And my understanding is that the government is not able to provide security [for government personnel like Warsame].”

Although Al-Shabab is now weakened, its members continue to assassinate government officials, attack government buildings and blow themselves up in populated areas. Warsame, who was in her 60s, is the fourth member of parliament assassinated this year.

In the last days of her life, Warsame appeared in video clips posted on social media, preaching about peace and unity, just the same way she did all along in her music career, which spanned more than four decades.

The U.S. State Department, United Nations and many world leaders have condemned the murder of Warsame.

Warsame was the quintessential human rights fighter and advocate for peace and unity — and I doubt we’ll see her likes again.