The first thing you might say to yourself when you walk into Rye, the new Jewish deli and bar in the former Auriga’s / Becky’s Cafeteria location is, “What!  No pastrami! A shonde! (disgrace, scandal, shame).” But this is not just any Jewish deli – it is (though they don’t advertise this fact) a Montreal-inspired Jewish deli, and in Montreal, the Jewish delis don’t serve pastrami, they serve smoked meat, which is sort of like pastrami, but without all the sugar.

This also explains why Rye serves poutine with smoked meat. (Poutine, Quebec’s most famous gastronomic delicacy, consists of french fries with cheese curds and brown gravy, though there are many variations, including Mexican, foie gras, and Elvis.) Smoked meat tends to crumble when you slice it, even when you slice it by hand, which is the proper way, and the way they slice it at Rye. So what do you do with all those little morsels of meat that you can’t stuff into a sandwich?  In Montreal, they toss them into poutine.

The other famous Montreal Jewish specialty is handmade bagels, which, if you grow up on H&H bagels, or even Bruegger’s bagels, look kind of funny – they are small and skinny and very dense, and you can see where somebody pressed the ends together to make a circle. Rye actually makes their own bagels on the premises, (and bialys, which are sort of like onion bagels without the hole) but they aren’t Montreal style – they are just normal bagels, which makes them more suitable for slicing and stuffing with cream cheese and lox or smoked whitefish. 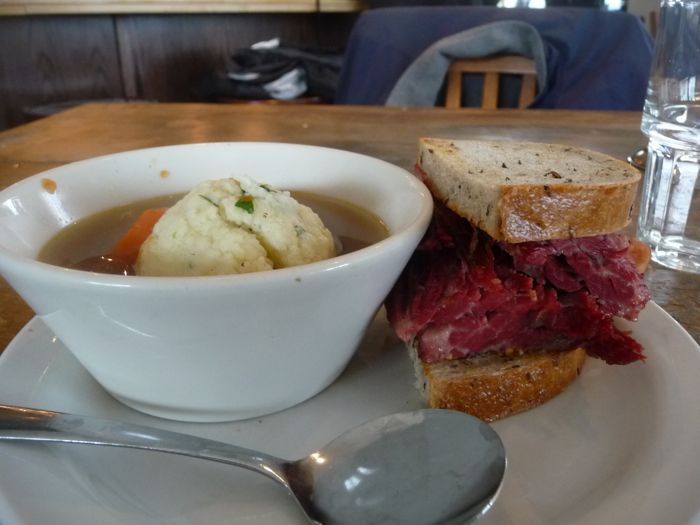 What I liked about Rye’s: I like the fact that they go beyond the standard deli menu, with traditional home-style Jewish menu items like kasha varnishkas (bowtie pasta with buckwheat groats), noodle or carrot kugel (hotdish), kreplach (Jewish ravioli) and matzoh brei (matzoh scrambled with eggs, burnt onions and salami optional).

I haven’t had a chance yet to sample all of these, but I did enjoy the lox and smoked fish platter for two (see above, $12.99), a reasonable portion of buttery lox and whitefish fillet (minus skin and bones) served with tomatoes, sliced onions, cream cheese, and a bagel. Also recommended is the mezze platter ($8.99), a meal-sized vegetarian combo of hummus, tabouleh, Israeli salad (tomato, cucumber, red onion and parsley).  The tzimmes, a hot dish of potatoes, yams and prunes, was as good as it gets (which is itself a subject for discussion), but has unfortunately been dropped from the menu. The housemade cheesecake ($5) was terrific – not as dense and heavy as mine, but light and moist and cake-y. (Did I mention that I co-wrote the book on cheesecake, which is now selling on Amazon for $112? Go figure. Forget Apple stock. I shoulda ordered more copies at the author’s discount.) 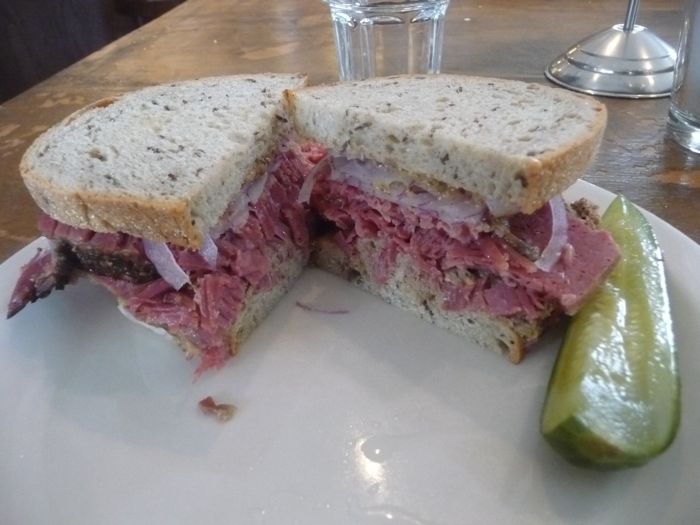 In my early visits, service seemed kind of discombobulated, with servers wandering around the dining room, plates in hand, searching for the number that matched their order. And on one visit, the kitchen was so far behind that the owner warned customers waiting in line that they faced a 30-minute wait. There were a couple of disappointing dishes – the noodle kugel and the matzah brei with salami were both kind of dry and bland, and some of the prices seem kind of high – like $12.99 for a modestly sized “Reason for Rye” sandwich (corned beef, smoked meat and chopped liver) with a little coleslaw on the side.

But there is lots more on the menu that I would like to try, including the braised brisket dinner, with pan juices and tzimmes ($14.99), and braised brisket sandwich ($7.99); the cheese blintzes with sour cream and strawberry jam ($6.99, weekends only), and the matzo fried walleye ($16.99).

Rye offers a full bar, a small list of wines by the glass or bottle, and a nice selection of beers on tap, including local microbrews (Flat Earth, Fulton) as well as (of course) two varieties of He’Brew beer, brewed and bottled by the Schmaltz Brewing Co. of Brooklyn, NY. I haven’t tried the Messiah Bold Brown Ale, but the dry-hopped Genesis Ale is a nicely hoppy session brew. No Dr. Brown’s Cel-Ray tonic, but you can get a traditional egg cream – chocolate syrup, milk and soda water.