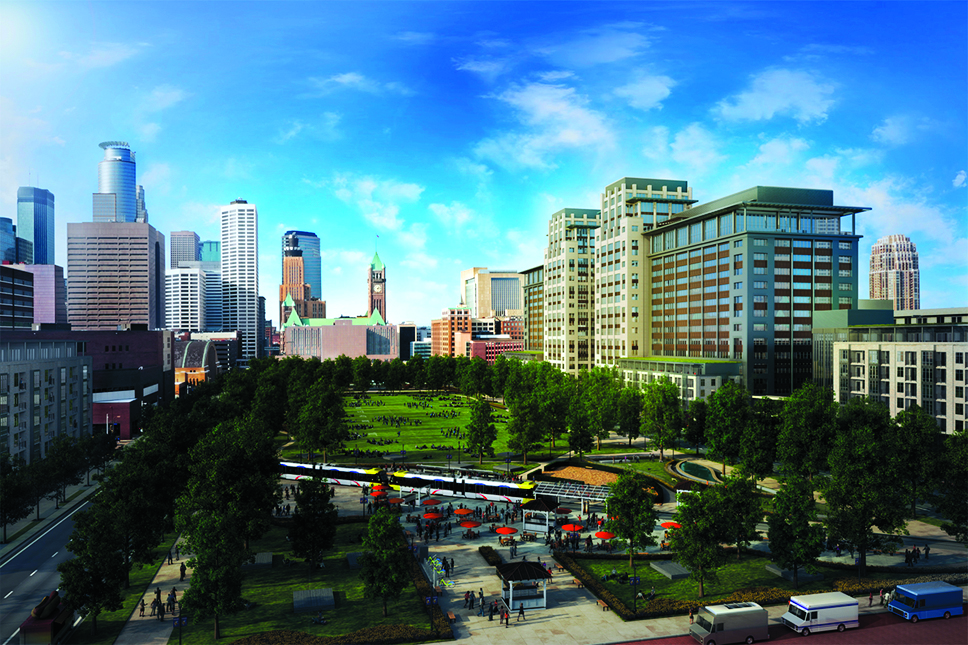 The day following the unveiling of the new Vikings stadium design, Mayor R.T. Rybak and Ryan Companies announced plans May 14 for a new public park and private development to connect the stadium to the downtown core.

Surface parking lots currently occupy much of the space for the proposed five-block re-development.

As part of the $400 million redevelopment, the Star Tribune will relocate from its headquarters at 425 Portland Avenue. “These headquarters are no longer suited to our current business,” said Mike Klingensmith, Star Tribune publisher.

“The Star Tribune continues to evaluate several exciting alternatives for a new headquarters,” he said, assuring “our commitment to this city.”

Ryan Companies vice president Rick Collins said plans call for the proposed public park to be surrounded by privately-financed buildings with 300 residential units on lower floors and office space above for 5,000 employees. He said Wells Fargo is a potential anchor tenant for the office space. “The urban park is critically important to making this development work,” he emphasized.

Also critical to Ryan’s plans: winning the open bidding process to build a parking ramp for the Minnesota Sports Facilities Authority that is part of Vikings stadium development plans.

If all goes well, Collins said, ground-breaking could begin in 2014 with phased completion in 2015-2016. He estimated 2,000 constructions jobs would be created.

“If what they’ve designed comes together, it’s going to be spectacular,” said David Ybarra, president of the Minneapolis Building and Construction Trades Council. “It’s a lot of work coming,” Ybarra added.