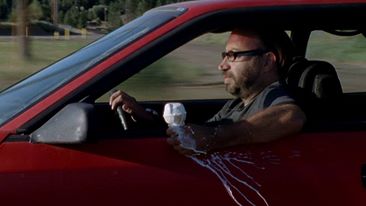 Tired Moonlight is local filmmaker Britni West’s first film as a director, and it’s  coming to the Minneapolis St Paul International Film Festival tomorrow. The film is an delicate atmospheric  homage to life in rural Montana, filled with soft touches, and introspective look at relationships in small towns. I really enjoyed it!

Most films that depict rural poverty in America – think about a film like Winter’s Bone – paint a bleak picture of life at the margins. Tired Moonlight manages to make the world of back roads Montana seem lovely, without resorting to the usual nostalgic clichés. It was one of the most honest meditations on small town life I’ve seen, and almost made me wish I’d grown up in a place like Kalispell.

The film also stars long-time Saint Paul punk musician, poet, book seller, and professor Paul Dickinson, who owns the Dead Media bookstore and runs the Riot Act Reading Series. Dickson’s character is a travelling drifter who drives a 90s-era Celica, and makes his living at thrift stores and estate sales. I chatted with Paul about his role in the film, the film’s big debut in New York, and what rural Montana and Saint Paul’s Midway might have in common.

Bill Lindeke (BL):  So Paul, I watched a screener of this film the other night. I really liked it! I was a bit bummed not to see the Montana landscapes on the big screen, but I loved how atmospheric and gentle the film worked, with the long shots and subtle dialogue. How did you get involved with this movie anyway?

Paul Dickinsoin (PD): Britni had seen The Last City in the East, a movie I had previously made. She used to run The Cinema Lounge at the Bryant Lake Bowl, where filmmakers show their movies through IFP LINK. So we met through that, and she made her movie out in Montana. So three summers ago, I went out there for 8 days to shoot the movie and got to know the cast and crew.

BL: Wow, that’s a long time ago. Only 8 days? I guess I forgot how compressed film-making can be.

I took a video production class at IFP once, and started to think about all the preparation that goes into it, and the post-production. It takes forever!

PD: The amazing thing is she shot in on film, so I was never able to look at the dailies. She sent them to Seattle to get developed.

BL: I guess you’d read the script beforehand though, so you knew what you were getting into.

PD: Yeah, I read the script. I worked really hard on the script, and made some changes, but they didn’t use any of them for some reason. 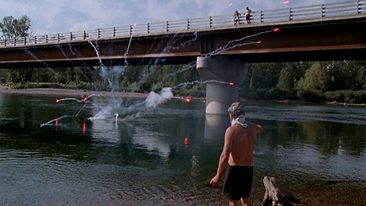 BL: Honestly, I thought the film was really sweet. It paints this lovely, but honest picture of what small town life is like, where people are struggling  but still have all this space and time in which to find happiness. Watching it made me feel good. It was warm.

PD: I think it really is about Montana, and in a beautiful way, it’ about the kind of life you live in Montana.

BL: In a way, too, there were some parallels with how you or I might live in Saint Paul. I was struck by your character, and how people make a living selling and buying scrap, surplus, thrifting, estate sales, or whatever. The scene where you’re throwing out old trophies… that could happen anywhere.

PD: It’s just modern life really, people doing what they do to get buy. The movie was all her vision and she stuck with it.

BL: So your poetry plays a big role in the film, appearing as a voice over at the beginning and the end. Which poems did you use? Did you write some just for the film?

PD: Yeah, some were pre-existing. Some were new. I just recorded a bunch of them in a studio setting, and she put them where she wanted. She wanted a voice over to frame the narrative in a different way than your typical plot exposition. I think its cool beca use its kidn of like about day-to-day Montana, but it’s also avant garde…

BL: Which ones did you use anyway?

PD: In the credits. “Where the league of beautiful waitresses.”

BL: Tell me about your character? What was it like to play him?

PD: Well, he was kind of a loser. I did what I was told to do. But I don’t know, he’s just supposed to be a weird guy that blows through town. But I don’t’ know. Its more important what he thinks than what I think.

BL: What kind of car is that that you got to drive? It’s pretty sweet, with the flip-up headlights.

PD: That’s a 1989 Toyota Celica. Yeah, I think that’s my favorite scene in the movie. When I’m putting gas in the car, and the dog comes and barks at me in the gas station. I think its poetic movie. You could take it as a whole, but there’s also these little visual tropes that you can really can, and might be easier, to get into.

BL: The other one I liked was with the mountain goats in the parking lot, just beautiful and quiet. So this is been on the festival circuit?

PD: Yeah, we went out and premiered it in New York at the MOMA. It was very cool to see it in the prestigious MOMA, and answer some questions from very serious New Yorkers.

They liked it, and how it brings up poverty. You know, they wanted… they were mystified that someone could just live out in Montana and not have much money, but still have a very nice life. 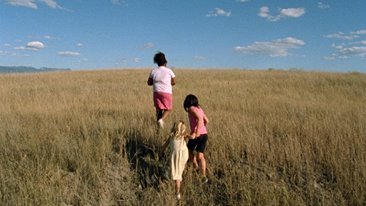 BL: I loved the kids scenes, of the kids just wandering around through the fields.

PD: Yeah, the children aspect. They’re just running wild, and kind of everyone takes care of them without people hovering over and them watching their every move.

BL: So it’s playing at the film festival? It’ll be nice to show it in front of a home audience.

PD: It’s playing once on Friday, and once on the 18th… You know, it’s playing so many fests, I can’t even keep track. So I’m glad that’s its finally playing in Minneapolis.

BL: I hope I can be there Friday night! Thanks for chatting with me.