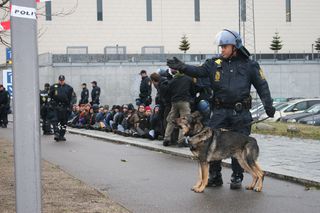 This morning, as I was getting ready for another day of climate work, I heard police sirens and shouting outside the window of our hotel here in Copenhagen. I looked out just in time to see a pretty brutal take-down of protesters by police.

We’re only a few blocks away from the Bella Center, the massive conference hall where the negotiations are taking place, and today a large march had been planned across town, ending at Bella. I saw protestors running, coming I assume from a nearby metro station, one of two meet-up points for activists. As I watched, police with dogs chased the protestors, slamming them to the ground in a show of force that seemed pretty unjustifiable for weaponless activists. As you can see from some of the photos below, several of the police were clearly undercover, dressed as activists. Nothing new as far as riot police tactics go, but chilling just the same.

As I sit writing this in our hotel lobby, I’ve watched no fewer than 30 police vans fly by with sirens blaring. Copenhagen is under a state of virtual martial law, and police are able to search and arrest anyone, at any time, for any cause. “Preventative measures,” they’ve said.

In a way, this is one of the biggest stories to come of COP15. Not this protest specifically, or these arrests, but the two worlds that have formed here: an “official” one made up of negotiators and heads of state that hovers just out of reach of the other world, the one the rest of us make up-NGOs, activists, students, youths and citizens.

We’ve spent hours alongside thousands waiting in the cold to get Bella Center access. We finally got in, but it won’t last. The UN has progressively whittled down NGO access over the week. We just heard that the environmental group Friends of the Earth has been banned entirely from the Bella Center, and none of us will be there for the final (and most important) days of negotiation. So much for a democratic process.

Ultimately, though, I’m not sure it matters much whether we’re in the Bella Center or not. It’s seeming increasingly unlikely that a binding deal is going to come out of this meeting, and if it does, it’s probably even more unlikely that it will mean much at all. Yesterday, negotiators took all the numbers (emission cap levels, etc.) out of the text for now. Not a hopeful place to be with just two days to go.

Two worlds here in Copenhagen, the one that cares mostly about looking as though they’re making progress, happy to end the week with a watered down “agreement,” and the one that knows that time is running out for real action. This is our chance, and I don’t think we’ll get many more of them.