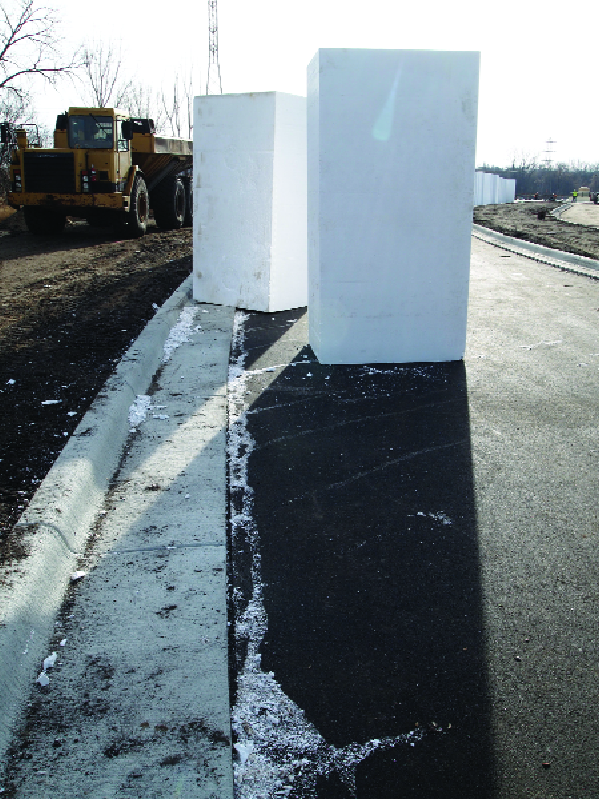 Construction continues on the Van White Boulevard exit from 394. In mid-October photos, one could see some of the curbing. In photos taken Nov. 21, the first asphalt is in and they were moving dirt in the new median and along the roadside. Stay tuned to see what these big Styrofoam blocks (left) are for.

Also in that general vicinity, at 1128 Glenwood, where Washburn Center for Children will build a new facility, Mohamed Lawal is the architect. He grew up in this neighborhood and also worked on the Sumner Library addition/renovation.

Both Anne Long from Plymouth Christian Youth Center and Beth Grosen from the City of Minneapolis Community Planning and Economic Development department (CPED) confirmed that while the former Broadway Rental building and the former Holding Forth the Word of Life building have been torn down (next to the Capri Theater), “we do not have a purchase agreement in place yet with the City” for the lots, Long said, “but will be moving ahead with that shortly.

“Our board approved in September that we move ahead with the purchase process, and approved in concept a very general architectural sketch for the eventual building we would construct…and that would include those necessaries we have been needing forever—the handicapped access to the stage, dressing rooms and a green room, more wing space and space behind the stage, an entrance at the rear to the campus.”

Long said they also want to move the dance studio out of the current lobby thus enlarging the lobby and opening it to the new space, “and if we can afford it, a glass box on the front corner that would be used like a black box but would be open to the street so people can see and hear what is going on inside.”

Grosen said the long-term vision has been to have multi-family housing with some first floor commercial on the block, and the Capri Theater expanding when fundraising is completed.

The asphalt parking lot on the southwest corner of Penn and Plymouth is the Hennepin County “interim” lot, built this fall after the City of Minneapolis finalized a ground lease. “The lot will be used primarily by NorthPoint staff and clients, but neighbors including Urban League, UROC, Estes funeral home, and the future grocery store can also use it for their larger functions on weekends and evenings,” Grosen emailed NorthNews. She is the planner assigned to many North Minneapolis projects.

“Glenn Ford of Praxis has exclusive development rights on the southeast corner of Penn and Plymouth. The City and Praxis will be submitting environmental clean-up grant applications next spring. Ford has explored multi-story options that provide office space above the 30,000 sq. ft. grocery store, but he has now chosen to focus on constructing the grocery store with a second story mezzanine. The schedule calls for Praxis to submit site plans to Minneapolis planning staff by year-end, and securing all approvals and financing before Dec 31, 2013,” Grosen said. 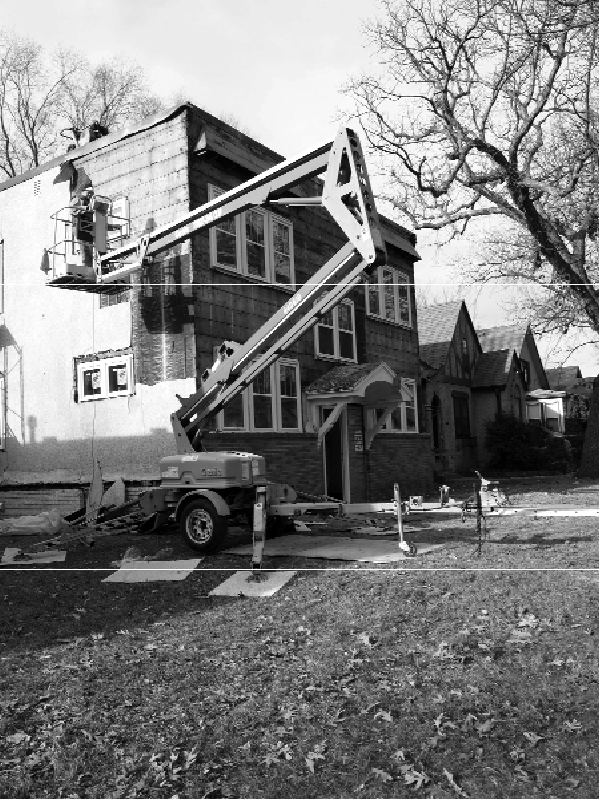 What’s happening at 3725 Penn Ave. N.? The fourplex pictured above, owned by Alliance Housing, is going to get new stucco. They’re tearing off the old stucco and renovating the inside with help from Cermak Rhoades Architects and using federal Neighborhood Stabilization Program funds. The remodeling permit on the City of Minneapolis property info website lists the value of the remodel at $298,000.

West Broadway Business and Area Coalition’s Planning, Zoning and Development Committee heard and favored the latest plan for converting the former Fire & Ice former Bean Scene former Burger King corner of Penn and Broadway into workforce housing and retail shops, primarily Broadway Liquor Outlet. The site plan calls for vacating Queen Avenue between Broadway and 26th and sharing parking with the Church of St. Anne’s-St. Joseph Hien; Sunday services are held when the stores are closed. This would make parking more accessible for visitors to the St. Anne’s housing, and leaves a clean parcel on the southwest corner of Penn and 26th for some kind of future development. Broadway Liquor Outlet owner Dean Rose noted that the lone house left standing on the block, a former Keith Reitman property, has been acquired.

Carlos Rodriguez, a founding member and for 41 years the day manager at Pepito’s in South Minneapolis, has died at age 69, of natural causes. Rodriguez grew up in north Minneapolis, where he won his Jr. Golden Gloves division (fighting for the Phyllis Wheatley) and graduated from North High School. There, he wrestled and played football. After high school, he sang in the R&B group Mota. His nephew, Joe Senkyr Minjares, playwright of King of the Kosher Grocers, developed the concept of Pepito’s.

The Minneapolis Park and Recreation Board (MPRB) is seeking feedback about its website (www.minneapolisparks.org) and is encouraging residents, park users and the general public to complete a brief online survey. Results will be used by the MPRB to redesign the website in 2013-14.

Our election coverage begins on page 4. In case you hadn’t noticed, we tend to complain when voter turnout is low. With almost all of the local precincts averaging near or above 70 percent turnout, compliments are in order. We’re glad our neighborhoods’ voices were heard, loud and strong, on election day 2012.

Minneapolis Public Schools recently joined about 60 local businesses to support growth of the West Broadway corridor through membership on the West Broadway Business and Area Coalition (WBC). The membership began in October, shortly after the school district’s grand opening of the new John B. Davis Education and Service Center, located at 1250 West Broadway.