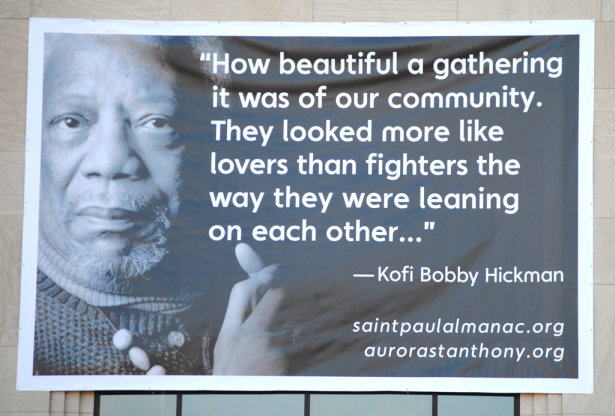 “We don’t want to forget the past or let it trap us as old baggage. We want to recognize our history and those who’ve contributed,” said Nieeta Presley, executive director of the Aurora/St. Anthony Neighborhood Development Corporation (ASANDC) at the launch of the Rondo Arts and Cultural Business District on June 13. The new district includes retail, service, food and entertainment venues in addition to landmarks, organizations, churches and schools.

EDITOR’S NOTE: The Rondo district is part of the World Cultural Heritage District along University Avenue’s light rail Central Corridor in St. Paul. Other cultural districts in the same corridor include Little Mekong and the Little Africa cultural district.

The name of the district comes from the legacy of Rondo, a thriving predominantly African-American neighborhood where black institutions and businesses were the pillars of the community. It was displaced in the 1960s by freeway construction. “The I-94 development hindered the small business economic engine that existed in the community,” said Presley.

According to Presley, many people are unaware of the dozens of African American businesses still thriving in the Rondo district. These run alphabetically from A to X (Arnellia’s to Xtreme Beauty), and cover an equally wide range of business types, from food and entertainment to law offices and theater. Presley described the Rondo Arts and Cultural Business District as running from Griggs on the west to Rice Street on the east, and from Selby on the south to Minnehaha on the north.

Ward One Councilmember Melvin Carter praised the work of ASANDC and fellow community members, making a meaningful connection between the past and the future. He recalled stories about Rondo from his childhood. As an heir of Rondo, Carter said, “I had a natural distrust for a multi-million dollar transportation project.” Carter has been credited for getting three key transit stops added to the route (Western, Victoria and Hamline Avenues) in his area, while representing the needs of business owners at City Hall.

“The initial question was ‘Will it stop for us?’” Carter said. “We were able to get those stops, which creates a different question: ‘Will we get on it?’”

“Our diversity should be an asset,” he continued. “Let’s make sure our diversity shifts from a potential asset to a kinetic asset; thriving and moving, bringing in jobs for our neighbors.”

Phyllis Gilliam can attest to the hardship of the LRT construction. She is the owner of Sunday’s Best boutique located in Frogtown Square on University and Dale. “It was hard to survive,” she said. “Thank God for the money they sent…that mostly went toward rent.” Gilliam applied for a special forgivable loan program administered by the City of Minneapolis and St. Paul. Business owners along University Avenue could apply for the Ready for Rail Forgivable Loan after sixty days of construction in front of their business. Businesses located one block away from the rail line, but also affected by the construction also were eligible to apply.

“It was hard for people to operate and we knew it because we had prior relationships,” explained Isabelle Chancellor of the Neighborhood Development Center (NDC.) “Even though the economy was [slowing] down, people got by. As soon as construction started, there was a halt. There was no way to grasp how difficult this was until it happened to you.”

NDC provided matching marketing grants up to $400 to cover business costs such as printing, business consulting, bookkeeping, taxes, websites, and other promotional pieces. “We wanted to provide new tools and affordable ways for them to function,” said Chancellor.

“Without NDC, I wouldn’t have made it. They help entrepreneurs like myself who have a dream,” said Gilliam.

Kimberly Nightingale and her team from the St. Paul Almanac joined in the celebration. “Placemaking is about the stories of a place; part of the economic engine,” said Nightingale.

Part of the University Avenue history is captured in the stories of elder Kofi Bobby Hickman, a lifetime St. Paul resident, community activist and former director of the Inner City Youth league. Hickman’s photo and quote are posted at the site of the Old Home Dairy building at University and Western Avenues.

Shaquan Foster, who designed the poster, represents the many young artists Mr. Hickman has influenced over the years, including Presley. “He taught me how to organize, and then we taught our kids,” she said. Hickman has been published many times in the St. Paul Almanac, including his captivating story, “The Brawl in St. Paul,” a story about reconciliation for two feuding rivals in the old neighborhood.

Golden Thyme Coffee Café, located at 921 Selby Avenue, is part of the new Rondo Arts and Cultural Business District. “We’re making sure we make connections from the halfway point, between Grand and University,” said owner Mychael Wright. “We’ve been making those connections — whether it’s a bus, trolley, artistic connection trail — to get customers off the beaten path.”

Wright shares in the vision of St. Paul as a cultural arts arena. He and other business owners along Selby Avenue have helped to revitalize the area, creating a hub of black-owned businesses from Dale to Lexington.

“We’ve been here thirteen and a half years… What was here was blightful,” he said. “This was the last area to have significant impact, and being a minority area takes a bit longer, but we were able to get the ears of the City.” He is the mastermind behind the annual Selby Avenue Jazz Festival, which will take place this year on September 14.

The ASANDC is looking for feedback about aspirations and dreams for the historic Rondo area. If you’d like to participate, go to the Rondo Aspiration Conversation or send a text message to (651) 560-6552.