In politics, the numbers lag the words, so if one can analyze the words, then there is a time advantage. Mitt Romney is the heir apparent to the Republican nomination for president, especially now with Chris Christie’s endorsement. Although Republicans are not generally happy, the endorsement race is Romney’s to lose. Using text mining, what can we find out about Romney?

I am using visualization of TagCrowd to first look at Romney’s announcement speech. 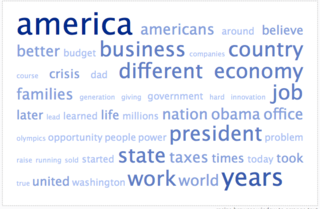 Romney’s word cloud is muddled when it should pop with clarity. Only the word “America” leaps out with “years” being the second strongest word. Romney’s word cloud seems to be “America needs a different president to fix the economy using business to bring in work and jobs in the next years.” Definitely stronger words should have popped out. The second strongest word, “years”, tells us that Romney’s message does not have urgency.

To truly understand the weakness of of this visualization, you have to look at comparative visualizations like President Obama’s job speech, FDR’s inaugural speech and Martin Luthor King’s dream speech, which I have provided after the fold.

The word clouds tell the story. Note how easy it is to see theme in these speeches.  MLK’s word cloud says “able to dream freedom and justice for the nation, negro and white together, today.” 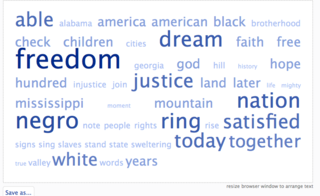 FDR’s word cloud says “action, discipline and leadership will the help people restore values to the nation and the world.” 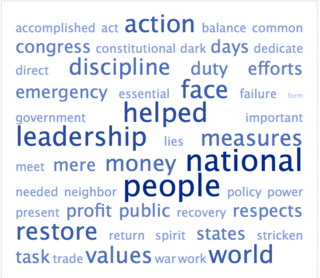 Obama’s word cloud says “plan, act, pass a bill and taxes for American jobs, for people, from business and companies, to restore the economy.” 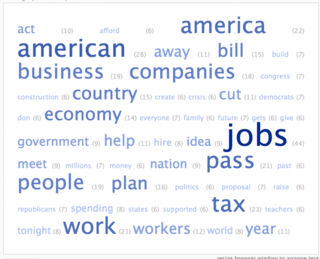 Using word clouds, the strongest contrast is in the time words used.  MLK used “today”. FDR used “days”. Obama has a faint “year”. Romney’s has “years”,  the longest time. This time element clearly sets the speeches apart.  The use of the word “years”  instead of  “today” and “days” can clearly explain why people feel a lack of urgency in Romney. The speech does not have a compelling feeling of action or urgency.

I think word clouds are a good way to analyze speeches across diverse audiences and from different times. People rarely hear a specific phrase the way that analysts do. I think people hear the drift of the words and go away with an impression. Word clouds are good measure of that impression feeling, yet it is done with a very objective word count tool.